Anthropogenesis Two: The Part Played in Labour in the Transition from Ape to Man, Or, Everyone Loves a Prequel 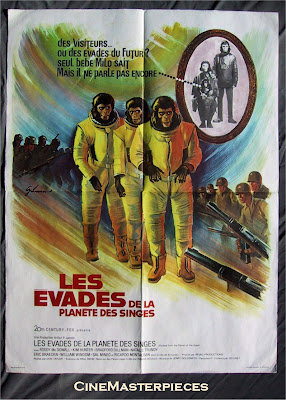 In the last post I said that I was going to follow the last post on Stiegler with a post on Virno, but I have decided to write a little about Lukács’ The Ontology of Social Being instead. I have been reading this over the last few weeks, and during that time it has occurred to me that Lukács could be understood as proposing a theory of anthropogenesis, a theory of the constitution of the human, that like Stiegler and Virno, sees this constitution as inseparable from the development of technology and social relations. This immediately superficial resemblance may just be another example of the way in which almost any two books read at the same time will begin to resemble each other, or at least produce effects of similarity or resemblance. (This phenomena really needs a name by the way)

First a word or two about Lukács, as Timothy Murphy has pointed out in his interesting essay on Lukács and Negri, Lukács is a philosopher who is often not read simply because he is so readily comprehended. Any student of critical theory, Marxism, or contemporary social thought knows about his essay on reification, an essay that, in the words of one of my professors, pretty much invented Marx’s early texts on alienation before they were published. That little thumbnail sketch, like all thumbnail sketches, has probably done more than anything else to keep Lukács from being read. Lukács’ fate then becomes much like Althusser’s, despite their strong differences of philosophical position. Althusser too has been reduced to a thumbnail, that of the break between the “young Marx” and the mature Marx, which sums up and reduces all of his writing.

Lukács’ project for an ontology is interesting to me now for at least two reasons. First, as Murphy points out, ontology would seem to be antithetical to the materialist or Marxist project: it is after all the epitome of a philosophy that has only interpreted the world. Second, we could add that this paradox has become increasingly prevalent, to the point where it does not appear as a paradox at all: Negri, Deleuze, Badiou, Zizek, and so on have all proposed ontologies, ontologies that are supposed to be aligned with a political project.

Lukács’ social ontology is an incomplete manuscript, made up of one volume on Hegel, one on Marx, and a final volume on labor. Aside from the two named philosophers the strongest philosophical influence is Engels, whose essay, “The Part Played by Labour in the Transition from Ape to Man,” provides much of the philosophical impetus for Lukács. As Lukács argues labor fundamentally alters the status of consciousness, constituting human consciousness. Animals may be conscious of this or that thing, but this consciousness, this memory, perishes with creature in question. It remains an “epiphenomenon of organic being.” Labor changes this, not only transforming consciousness, since labor is inseparable from the positing of a goal, from the recognition of something unrealized, but with the instruments and techniques of labor this consciousness becomes something that matters, that has effects. The social as a level of reality that has consistency, that constitutes man’s second nature, comes into being with labor.

Lukács point about the role of labor and its exteriorization plays in the constitution of humanity anticipates Stiegler’s point. They may in fact share a similar set of anthropological or archaelogical references. Stiegler’s point of reference is primarily Leroi-Gourhan who may or may not have influenced some of the anthropological and archaeological writers Lukács sites. I haven’t yet fully traced the history of this notion of anthropogenesis, especially its connections to materialist ontology. I am still trying to get my hands on Anton Pannekoek’s book on Anthropogenesis.

What is interesting is the particular sense that Lukács gives ontology, or “social being,” and the strengths and limits of this conception. Lukács focus here, as it was in his famous essay, is primarily the antinomies of bourgeois thought: antinomies which pit the abstract “ought” against mankind’s animal nature, or a world of purpose, governed by God, against utter meaningless. What these perspectives miss in their antinomies, or out and out opposition, is what passes between both sides of the opposition, and that is the social. For Lukács it is senseless to speak of mind and body, of consciousness and nature, without recognizing that the social is that which constantly passes between the two, naturalizing consciousness by making it part of nature and constituting the backdrop of a second nature. Labor constantly shifts the relation between nature and society.

For Lukács this second nature is best understood through labor, or rather through the teleology of labor. This perspective, which Lukács attributes to Marx, overcomes the limitations of philosophies that understand nature, or history, through teleology or dispense with teleology altogether. (As Lukács points out, even Spinoza had to acknowledge a teleology for human action). As Lukács writes: “It is precisely the Marxian theory of labor as the sole existing form of a teleologically produced existence what founds for the first time the specificity of social being.” Labor is inseparable from a telos, from the idea of some end, but it can only arrive at this end if it subordinates itself to the materiality of conditions. One does not master nature, but studies it and only by learning of its properties can one transform it: the history of technology from the flint axe to the computer chip are as much about understanding the immanent properties of material than about any mastery. Labor is thus a transformation of both nature and the subject. In order to work it is necessary to master oneself, to put off desire. As nature and the subject are transformed labor produces a surplus, above and beyond any product or commodity, and that is the knowledge of this process. This surplus, along with the transformation of nature and the subject that it entails, is what is called social being.

Lukács philosophy, like other Marxist philosophies (Althusser comes to mind) attempts to expand the terrain covered by Marx by expanding labor. Labor becomes the basis of not just a politics and an economics but an ontology. (Of course it is an ontology that Lukács argues was already there in Marx’s remarks about the labor process). I am sympathetic to Lukács perspective, but I cannot help but think that it generates more questions than it answers. As Lukács states the contemporary labor process is much more complicated than the simple positing of an end to be realized through a process. The ends of my actions are no longer needs, even those needs that have been transformed by society, but something that is simultaneously much more abstract and immediate, the “need” to make a living, to earn a wage. Second, and perhaps more importantly, the means of the contemporary labor process are no longer the natural world, or its laws, but encompass the social world, social being itself. Lukács repeatedly gestures to the fact that labor increasingly works on social relations as much as on material things, even making reference to Marx’s concept of ‘real subsumption.’ However, the actual difference between labor carried out in formal subsumption and in real subsumption is not really theorized.

On the one hand we have this fundamental principle: “Even the most complicated economy is a resultant of individual teleological positings and their realizations, both in the form of alternatives.” This is modified by another fundamental principle, borrowed from Hartmann, that the more complex levels of social complexes attain supremacy over simpler levels, even as the latter remain in some sense determinate. In other words, no matter how hungry we get, we do not eat dogs (social being taking precedence over natural being). These two principles, the individual teleogical positings and the determination of the simple by the complex, constitute something of a contradiction, a contradiction that marks the limits of Lukács’ text. Of course it is unfair to point to limits to an incomplete manuscript, but Lukács’ limits here are the limits of social theory itself, caught between the perspective of the individual and that of the social totality.


Posted by unemployed negativity at 6:12 PM

Email ThisBlogThis!Share to TwitterShare to FacebookShare to Pinterest
Labels: Lukács

relationships that bind people together and create a sense of community.

and increased crime. We must find ways to deal with our profound loss of

social connectedness.Even though technological advances have contributed significantly to the problem of isolation, the emphasis on individualism in today’s society has