The Play of Form and Content: Scattered Remarks on Popular Culture, Part Two 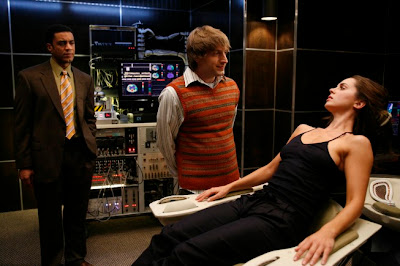 It is no secret that I enjoy Joss Whedon’s work. Enjoy is the operative word: while other shows such as The Wire are more intellectually and politically engaging, Whedon’s shows and movie, Buffy, Angel, Firefly, Serenity, and Dr. Horrible, have always been about enjoyment. Thus it was with a great deal of anticipation that I tuned into the first episodes of Dollhouse. I was almost immediately disappointed. I wasn’t sure why, my first thought was that everything I enjoyed from previous shows was missing. Whereas past shows had ultimately focused on the development of the relationships amongst an ultimately likable group, Dollhouse actively makes this impossible.

The premise of the show is a mysterious organization, the dollhouse, that supplies individuals, “dolls” or “actives,” who can have any memory, personality, or set of skills implanted in their minds only to be erased later. This means that the show effectively presses the reset button, at least with the central characters, every episode. The characters who are not actives, the staff of the dollhouse and the FBI agents investigating them, are mired in deception and intrigue. There are moles within the organization and multiple spies. On the one hand disconnection, the impossibility of relationships, or connection; on the other hand, relationships that are never what they seem.

At this point it is perhaps worth pointing out that the enjoyment I referred to above, the relationships amongst likable characters, is perhaps the ideological degree zero of television, the “imaginary relationship to the real relations of production.” Television series, successful and loved ones, offer an imaginary family or group of Friends that one can meet up with every week. Perhaps then Whedon’s show is a kind of self-critique of television, a show that refuses connection, refuses to offer the viewer a place “where everybody knows your name.” This is possible, especially since the fact that the show’s central characters hit the reset button mimics the other unstated presupposition of television: the repetition underlying television series, that every week, after all the mad cap adventures, everything goes back to square one. The show pits one unstated presupposition of television against another. (These two elements of television, the linear and the episodic, are often in contradiction; case in point, The X-Files in which the repetition of the conflict between skeptic (Scully) and believer (Mulder) was in extreme tension with the linear development of the alien conspiracy.)

This might be the case, especially since Whedon has often struggled with network executives who have wanted shows that were more “serial” in nature; shows without complex histories of characters and involved plots, shows that can be consumed and resold as independent units. (It is interesting to note that television seems to be dividing along these lines: cable television is generally characterized by shows that are linear, while network television sticks to the “procedurals” and “sitcoms” that function without history) However, I think that it might be going too far to see the show as television’s self critique. At the same time the show has become, if not more enjoyable, at least more interesting in recent weeks, and this enjoyment has something to do with the way in which the show touches on the core of television, fantasy and repetition.

When the show began, its premise was that the dollhouse served elite clientele with people, the actives, who could do anything, be anyone, and forget it all when it was over. There are many problems with this premise; most importantly it is hard to believe that such a high tech service would be needed to serve the needs of the ultra-wealthy. The technology just seems overkill; why couldn’t the wealthy and powerful just hire regular call girls and hostage negotiators? However, recent episodes have begun to suggest that this premise is something of a ruse. The dollhouse does not serve the wealthy, but secretly controls them by controlling their fantasies. This idea that control operates not through overt power, or even wealth, is underscored by the show’s repeated insistence on the constitutive nature of fantasy. The show returns again and again to the question as to the difference between a relationship with an active, with a programmed individual with whom one cannot have a history, and a relationship with a “real” person. The people involved in the dollhouse, the people who run it and are served by it, stress that illusion, fantasy, is not seem deviation from “real relationships” but constitutive of them. As Adelle DeWitt, the woman who runs the dollhouse, says on the episode that I am watching as I type this: “Illusions aren’t worthless, they are at the heart of most relationships.” If fantasy, idealization, or imagination is part of every relationship, if these fantasies sustain us, then how does one distinguish between a real and fake relationship?

This emphasis on fantasy as constitutive of reality and control is complicated by a second theme, that of resistance. The press surrounding the show has stated from the beginning that the arc of at least the first (and possibly only) season had to do with the central character, Echo, eventually recovering her memories, and presumably resisting the dollhouse. This bit of detail may have been released early as an attempt to ward off criticism. Whedon is famous for his strong female characters, and, as many critics have pointed out, dollhouse breaks with that element of his reputation as well. The question remains where will this resistance come from? Will it be some core of the self that cannot be erased? Or is it just a glitch in the system? I am pleased to say that the show has been refreshingly ambiguous on this point. Suggesting at times that resistance is transcendental, stemming from an element of the self that perseveres through the multiple erases; while, at other times, suggesting that the tendency to exceed the program is an effect of some other technology, a mind control chemical, or even other attempts to manipulate the program. Resistance is then sometimes presented as external to the machinery of control, some core self, and sometimes as nothing other than the noise internal to the machine itself. In the first case it is dependent upon some idea of an essence, of something that cannot be produced. In the second, however, resistance is nothing other than the excess of every program over its parameters.

(As something of a side note: I was always intrigued by Spike’s arc in Buffy. In that show Angel was the vampire cursed to have a soul. Spike didn’t have a soul, just a chip that caused pain whenever he tried to kill someone. However, this chip effectively changed his relations to others, setting him on the path to redemption. What then is the difference between a soul and a chip that shocks you when you are bad? This always seemed to be Whedon at his most Foucaultian: “The soul is the prison of the body.”)

I do not want to draw all of the theoretical connections that could be made out of these two points: control through fantasy and the immanence of resistance. Rather, I will conclude by saying, perhaps too late, that Dollhouse has potential; not the potential to be another Buffy, a reliable hour of entertainment, but to do what much good science fiction does; that is present the present to us in the form of a fiction. I feel that in saying that I have doomed the show because that is perhaps simply too much to expect from television.

thanks for this - i watched the first four or five episodes and had very mixed feelings. i'm inspired now to get caught up and give it a chance.

It does get better around the sixth episode. However, it also looks like it is going to get cancelled, so there might be an argument for not giving it a chance. In the end though I think it might work best as like a season or two of episodes.

Great post. I'm really into the series. I think it's really fun and also really intellectually interesting. I particularly like the the characters are pretty morally ambiguous across the board.
cheers,
Nate