Don't get Mad, get Coopted: A Few Thoughts on Mad Men 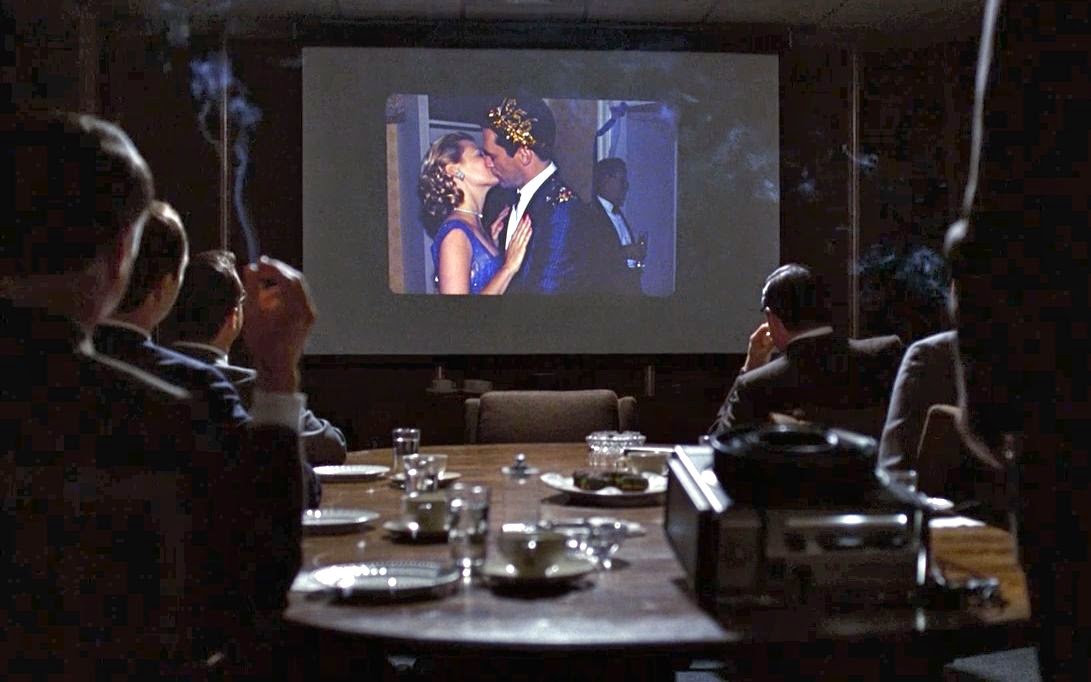 Mad Men is perhaps unique among American Television and even popular culture in that its subject matter is history. By history I do not simply mean to say that it deals with a different time period, while such programs are rare, they do exist (for example Deadwood, Rome, etc.). Rather, it is historical in Foucault’s sense of a historical ontology of ourselves; in presenting life in a nineteen sixties add agency it continually examines the gulf that separates then and now.


History appears in the show in three ways.

In the first, it is a matter of creating a kind of alienation effect, of exposing the differences of habits, expectations, and ideals that separate the present from the past. In the first season especially, many of these differences are played for laughs, the kid running around the house in a plastic dry cleaning bag playing spaceman and the countless cigarettes consumed, provoke shock and a chuckle. The laughter punctuates the difference between then and now. In these moments it is the pure difference between then and now that stands out. There is no connection, no link, between the time when there was a bar in every office and now: difference precludes causality.

The second historical aspect has to do with the recognizable events and timelines that define the past: the election of John F. Kennedy, the death of Marilyn Monroe, and the Cuban Missile Crisis. These events frame the show, taking place off screen, or rather on screens, on the televisions in the homes and offices of the show, but are not part of the narrative. They are nonetheless immediate in their mediation. At times they are used to provoke action on the show, as was the case with the Missile Crisis, which precipitated several crises (most notably Peggy’s revelation to Peter) and resolved others (bringing Don Draper home) within the shows narrative. What is interesting about this second dimension of history is that it demands some kind of historical literacy on the part of the audience. This distinguishes the show from programs like Rome, which used historical material for the basis of narrative: it was possible to follow the entire series on its own, without knowing anything about the Roman Empire. With Mad Men one must know, or at least be willing to wikipedia, what happened in the nineteen-sixties in order to follow what is happening on the program. The more one knows about the past, the more the suspense increases and the more the show creates a highly ambivalent nostalgia about the past it depicts.

Finally, there is the third, and most interesting historical aspect of the program: the way that it functions as a kind of genealogy of the current historical moment. This has to do with its setting in a specific period in the age of advertising. As books like Thomas Frank’s The Conquest of Cool have argued, the show takes place on the eve of a revolution in advertising, which is also a revolution in consumer culture. This was the shift from advertisements that purported to convey some information about the product, men in white lab coats testing cigarettes, to adds that bathe the product in some kind of glow of sentiment or desire. The major events of this transition are depicted in the show in terms of the shift in smoking advertisements brought about by the discovery of the link between smoking and cancer, the shift from commercials citing "tar content" to Malboro men and the Volkswagen “Think Small” campaign. The show depicts the prehistory of the spectacle, of images that promise pleasure and happiness rather than just promote products.

In the show the catalyst of this shift in advertising culture is Don Draper, whose rousing pitches extol the sentiments of such products as the Kodak Carousel. Draper is able to do this in part because he always has one foot outside of the office, in the emergent counter culture. He spends his afternoons watching Italian and French post-war films, and, through his affairs, he has contact with the bohemian counterculture of New York. Draper’s contact with the critics of bourgeois culture make it possible for him to see the longing at the heart of it. Of course the details of life contribute to this as well, the fact that he is quite literally a self made man, who fabricated his identity out of the remains of another man’s. This makes him someone who had to self-consciously adopt the habits of his new status, rather than simply receive them. Some have suggested that he is talented at advertising because he is invented, absent, and one-dimensional. I have to admit that I do not find the Don Draper/Dick Whitman subplot to be as compelling as other aspects of the show. I think that the show could function without it, or, rather, without it the focus would be on something that is far more interesting: the way in which advertising has perhaps always channeled discontent resistance and rebellion to capitalism in order to serve consumer culture. This is perhaps a cultural version of the “autonomist hypothesis,” the idea that it is resistance to capital that shapes and prefigures capital itself. Mad Men is then a kind of history of the present. The dapper men and women of Sterling-Cooper, frustrated artists and writers, prefigure later age’s web designers and “ immaterial laborers.”


Posted by unemployed negativity at 8:10 AM

While I have never watched the show - and have no intention of getting involved - I enjoyed you critique.
I am fascinated by how the throw-back sexiness of women in skirt suits, hair buns, and tight fitting cotton dresses have singed a new entry point into "the square" (or gray flannel suit) culture. By stuffing the pre-feminist uniform with the hyper-sexualized curves of the cable TV vixen, the “other Victorians” are exposed as ubiquitous, status quo, and banally scripted. This recasting of the bourgeois perversion/deviance, further supports a reading of counter-culture reaction as a misfiring of spoiled, ignorance.
In addition, it occurs to me that we have been slowly instructed, growing up with shows like THE WONDER YEARS, to accept the weight of sentimental melodrama as the proper response to history. This defuses any threat or criminality exposed as the historical narrative is exposed to a fuller, nuanced critique. We are taught, not to investigate, but to reflect with teary eyes the glory of past foibles with a palpable effusiveness.
Not to mention, either, the marketing campaign recently unfurled across the restrictive frontier of our Facebook pages. MAD MEN invited us to enter into its obit by cartooning ourselves into a poorly rendered SHAG rip-off caricature. At once aligning ourselves with the throw-back glee of ice cube tinkled Scotch and pearl necklace beehives, while actually painting the self-promoting social network with a uniform announcement of tv show promotion. An ad office executive’s wet dream, voluntarily and instantly realized.
Or something.

Another piece which makes the Conquest of Cool/Mad men connection, offered as something of a follow up:
http://www.prospect.org/cs/articles?article=mad_men_rebellious_youth

Although as the article's uncertain phrasing vaguely illustrates, the real question, at least for a line of thought that extend from Tronti to Deleuze, is did Madison Avenue invent cool, or did it merely coopt it?