Vietnam is in Our Boardroom: Or, Everyone is a Colonist to Someone 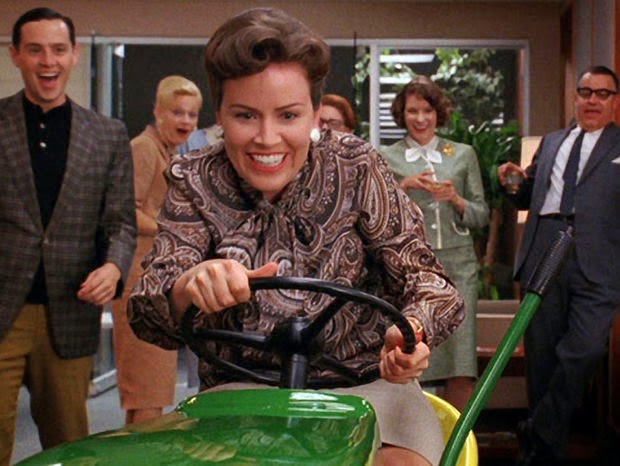 Shelton has been doing a great job with this season of Mad Men over at his blog. I do not want to intrude, but I had a few thoughts about this week’s episode. First, I have been rereading Kristin Ross' May ’68 and its Afterlives, a book that I still think is very important, albeit a bit too heavily influenced by Rancière. This last point is not so much meant as a criticism of Ross or Rancière, it just reflects a general problem: how to theorize an event that is itself the impetus behind so much thought, so much theory? Interpreting it through the lense of one theorist (why not Deleuze, Badiou, Foucault, the situationists?) seems like an unfortunate reduction. But, I digress…


Anyway, at some point in her book she discusses the role that the anti-colonial struggles, Algieria and Vietnam, played in radicalizing French politics, making way for the famous events of May. One example of this is the phrase “Vietnam is in Our Factories.” The phrase is taken from a Fiat strike in Turin, but in Ross’ view it captures some of thought and action of the French sixties, in which the direct and brutal exploitation in the colonies exposed exploitation at the heart of the West. Such an idea can even be traced back to Marx, who recognized the necessity of primitive accumulation, and thus of violence in the more open colonies. As Marx writes, “In the old civilized countries the worker, although free, is by a law of nature dependent on the capitalist; in the colonies this dependence must be created by artificial means. ”

What does any of this have to do with Mad Men. Well after watching last weeks episode I thought about the phrase that Ross cites, or my own twist on it. This was my reaction to the brutal and shocking scene at the center of this week’s episode. [Spoiler alert] I am referring to the scene in which the hapless secretary, Lois, runs over Guy Mckendrick’s foot with a lawn mower in the offices of Sterling-Cooper. The riding lawnmower is Ken Cosgrove’s trophy from his latest victory, securing the John Deere account. This scene, which is shot with all of the conventions of cinematic violence (the blood that spatters across the faces and shirts of Sterling Cooper’s junior executives), is a shock because it is such a departure from the show’s aesthetic of smoldering understatement. What does it have to do with Vietnam? Well for starters in a few moments before, at the company party, members of the staff were discussing the escalating war in Vietnam. The blood and screams that follows a few seconds later feels like an interruption of traumatic reality at the heart of the shows fantasy of the sixties. One of the interesting things about this season is the way in which blood and violence has gradually begun to enter the show’s frame: Gene’s war souvenir, the self-immolation of a Monk, and Medgar Evers’ ghostly presence. The bloody foot, and the shattered life of a young man, is then just part of the escalation. 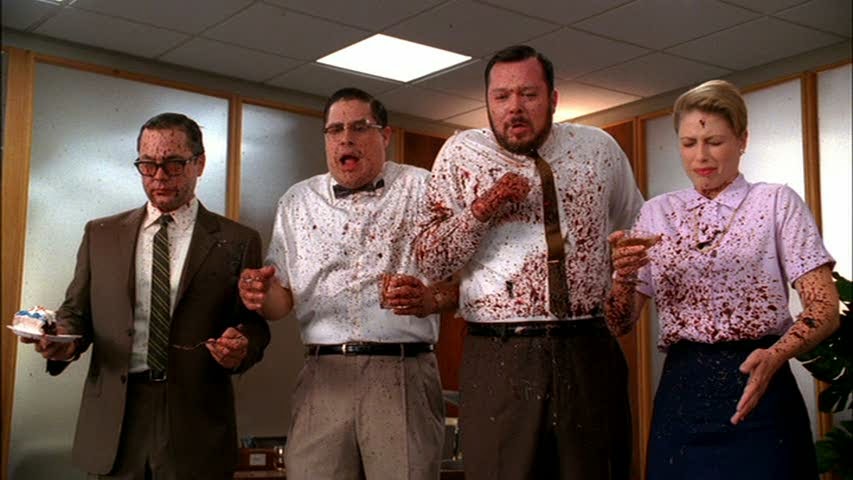 Beyond that, the scene got me thinking about the way in which the particular episode is all about colonizers and colonized. First, there are the obvious references to Sterling Cooper’s new British owners (I forget the company name) arriving for an inspection visit on the eve of the Fourth of July. Beyond that the episode is riddled with visual cues of empires that have fallen: Japanese and British armor decorate the halls, a member of the company is sent to the new offices in Bombay, and so on. Beyond these literal colonies there is the way in which the past weighs on the present. The moment before the violent explosion of blood is also framed by Joan and Peggy’s discussion of their different attempts to deal with the crushing weight of patriarchy: Joan’s attempt to marry her way out of the office and Peggy’s difficult climb into the male dominated world of copywriting. Their different routes out of the restricted life of secretary have led to conflicts between them, but Peggy is trying to make peace, a peace founded upon a recognition of their shared condition as women in the sixties. Lastly, there is the story that frames the episode, Sally Draper’s difficulty in dealing not so much with the death of her grandfather, but his apparent rebirth in the form of her brother. (After all, he looks the same, and even sleeps in the same room). What can these be, but the ultimate colony: the way in which the past, dead labor, constantly determines the fate of the future. Sons try to be their fathers, daughters are shaped to be like their mothers (complete with Barbie) and colonies eventually become colonizers.

Thus, to close with Marx:

“The tradition of all dead generations weighs like a nightmare on the brains of the living. And just as they seem to be occupied with revolutionizing themselves and things, creating something that did not exist before, precisely in such epochs of revolutionary crisis they anxiously conjure up the spirits of the past to their service, borrowing from them names, battle slogans, and costumes in order to present this new scene in world history in time-honored disguise and borrowed language.”

Posted by unemployed negativity at 11:05 PM

Really good observation about the slow encroachment of blood and violence. I didn't quite know what to make of the John Deere episode, but I think you are right--it's sort of a Vertov moment, like the use of red in _La Chinoise_. They all have blood on their hands (they just don't know it yet).