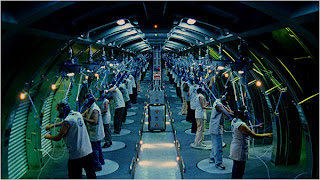 
As it has been indicated above these two concepts often appear together: violence, the violence of primitive accumulation is aimed against the common, in the sense of the new enclosures. However, they do not always appear together. Althusser’s aleatory materialism is in part based on a reading of the contingent (and overdetermined formation of capitalism in primitive accumulation), but does not develop and understanding of the common. Alternately, much of the writing on the common in the works of Paolo Virno and others, does not consider it in relation violence, at least the constitutive violence of primitive accumulation. Beyond this distinction, there is the difference of level of the specific philosophical engagement and conceptualization, what could be considered, for lack of a better word, abstraction. Sometimes these themes of primitive accumulation and the common are considered on a register that is primarily sociological or economic: this is the case in David Harvey’s writing on “accumulation by dispossession” and De Angelis writing on the commons and “new enclosures.” In other contexts, however, primitive accumulation is not so much the basis for theorizing neoliberalism, as it is the condition for a meditation on contingency, violence, and social relations. The same could be said about the common, which is sometimes used to refer to the environment or the knowledge commons of the internet, and is sometimes used to refer to subjective possibilities, the capacity to constitute relations through language, affects, and habits. The common is figured both as a way of thinking about resources, natural or artificial, or a way of thinking about the transindividual conditions of individuation. It is simultaneously concrete and abstract.  I do not see this last point as a limitation, far from it. In fact, it seems that there is a constant movement within various Marxisms where concepts are constantly extended beyond their strictly socio-economic register to become general ontological conditions: alienation, labor, reification, and commodity fetishism all have been extended or generalized in this way. This movement, from specificity to abstraction, duplicates Marx’s own theoretical production, which Balibar has described as falling short and going beyond philosophy.

The full ramifications of these concepts, as well as an explanation as to why they appear now (what is it about the present that makes the common and primitive accumulation appear as necessary points of reference?) will have to wait. I merely indicate this now as a provocation and reminder.

However, it struck me that the film Sleep Dealer serves as interesting illustration of at least some of these ideas, most specifically the relation between the two sense of the common, the commons as resource and the common as communicative relation. The film takes place in Mexico in the not too distant future. The first thing that we learn about this future is the water, the water that would irrigate crops, is no longer a free-flowing resources, part of the ecological commons, but a privately held and sold resource. In the beginning of the film we see Memo, the protagonist, and his father walk up a dry riverbed in order to purchase water. We learn that these privately owned water-reservoirs are protected by unmanned drones; these drones controlled by high-tech workers in the US, who are hardwired into their machines. One of the movies best satirical moments has to do with the reality based TV show that follows these drones as they protect property (see the trailer above). The show is modeled after such programs as America’s Most Wanted, with an enthusiastic and smiling love of authority and violence. (This reminded me of the television commercials in the first Robocop, fragments of a satirical future interrupting and punctuating the films plot.) In the meantime Memo desires to be connected to the larger digital world, running a pirate connection to the global digital network in his garage.

It is a world of virtual connections and real borders: workers in the US send drones to police water and other properties, while workers in Mexico provide the intellectual and affective component to machines in the US. They are prevented from crossing into the US by a giant wall, the sort that now only exists in right wing fantasies. As one character in the film describes the situation, it is what the US always wanted “work without workers.”

What makes the film interesting is the way that it explores the relation between the physical borders, defending nation and property, and virtual connections. Memo meets a woman who considers herself a writer. A writer in this future is one who uploads their memories, thoughts, feelings, and desires, up onto a network where they can be purchased by anyone. They are not exactly common, since they are bought and sold, but they are not private either. I do not want to give too much of the film away, since I would suggest that you rent it, but ultimately the plot concerns the relation between these two senses of the common: the first, the commons of resources that are privately owned and the second, which despite being owned, still circulates and has effects.

If film is, as Fredric Jameson argued, a kind of cognitive mapping of the present, the Sleep Dealer does a good job of illustrating a world that is simultaneously more disconnected, divided by borders and divisions, and more connected than we often think.

Nate, It is funny that you should say that since the first few paragraphs are an attempt to synthesize some thoughts from the conversations in Minneapolis.

That is funny. As synthesized here they spurred further thoughts on my part, which helped me get much closer to finishing the talk I'm supposed to give.