You Can't Kill a Ghost: Hegel, Hardt, and Negri 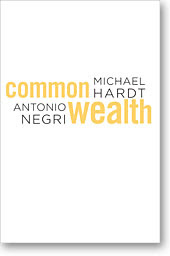 It was perhaps Foucault who first cast Hegel in the light of a horror movie, who argued that for all of his generation’s attempts to escape Hegel, they still might find him “motionless, waiting for us.” Like the killer in a slasher movie, Hegel springs out of the dark just when you thought he was dead. Perhaps a fitting fate for the philosopher who gave us the conceptual underpinnings of the contemporary sequel: the bad infinity, a series of differences that do not make a difference.

I thought of these remarks on Hegel, which suggest that all anti-Hegelianism will return to Hegel in some way or another, in reading Michael Hardt and Antonio Negri’s Commonwealth. Hardt and Negri are famously anti-Hegelian, presenting an immanent constitutive tradition of Machiavelli, Spinoza, and Marx, against a political tradition of dialectic and mediation, made up of Rousseau, Kant, and Hegel. However, Hegel, or at least a ghost of Hegel makes an odd reappearance in this text, raising some interesting questions.

As the title suggests, Commonwealth is concerned with the common. The common is defined as that which exceeds state or private ownership, everything from natural resources to the second nature of language, knowledge, and habits that becomes the basis for wealth production but cannot be owned. (Hardt and Negri’s primary concern in Commonwealth is with the latter, second nature; they say little about the former. Michael Hardt recently made some interesting remarks about the distinction between nature, as the commons, and the common in Copenhagen.) The common is what capital exploits, but it is also what gives the multitude direction and consistency: the goal is to liberate the common from all of the corrupt institutions, which exploit its creativity and openness.

In what is perhaps the most interesting chapter in the book they outline the family, corporation, and the state as the three “specters of the common,” three institutions that corrupt and limit it. To return to the metaphor of a horror movie, the frightening theme would cue up right about now, suggesting that the monster is lurking about, just out of sight. The family, cooperation (or civil society), and the state are the three spheres of Hegel’s ethical life. Hegel’s presentation of these three spheres, in which the family is immediacy, all warm and confining; civil society, is the negation, competition as the war of all against all; and the state is the reconciliation of the two, individual freedom and ethical substance, is one of the places where Hegel risks collapsing into a caricature of himself. Which is unfortunate, since these passages constitute some of Hegel’s most important socio-historical writing, incorporating his reflection on the limits of political economy and its perspective on the state. It also suggests that politics should be understood in terms of the various institutions and relations that traverse it, relations which are also productions of subjectivity.

(The curious thing about this oddly spectral Hegel is that Hardt has written one of the better essays on the contemporary relevance of Hegel’s conception of civil society. In that essay, “The Withering of Civil Society,” Hardt follows Deleuze’s idea of a control society, arguing that Hegel’s civil society corresponds to Foucault’s disciplinary power. The very idea of civil society, situated between family and the state, demands heterogeneity and separation of institutions, each with their own norm and structures. In its place we have control which permeates all of these structures, subordinating to the same relations of debt; think of the breakdown of family, work, and school that confronts the modern university student, still at home, working, and already in debt. Finally, Hardt and Negri argue that the “withering away” of civil society often entails the creation of a simulation of society, such as the media, which simulates society without its conflicts. This historicization of the concept, as well as a specific mention of Hegel, is absent from Commonwealth.)

What is most striking, however, in this contrast between Hegel, Hardt, and Negri is the presence of this logical, or conceptual structure, that of the dialectic itself in the former. Hardt and Negri’s presentation of the corruption of the common contains many insights, but there is no real articulation of the relation between these three different sites. The family is presented as the primary institution in society for mobilizing the common as the sole paradigm for relationships of intimacy and solidarity. The family corrupts the common in limiting it, isolating it to what is essentially an extended narcissism: my family as a projection of myself. The corporation is then presented as a massive corruption of cooperation: it is the primary experience most of us have of cooperation, but it is cooperation subordinated to a false unity, that of the corporation as our common interest. Finally, the nation remains the “only community imaginable,” the only common basis for politics.

These remarks are interesting, and I share their fundamental idea that the task of any committed political philosophy is thinking the social relations, collectivity, or the common beyond the ossified structures of family, corporation, and nation. However, the contrast with Hegel demonstrates that it is not enough to posit each of these as institutions as corruptions of the common, it is necessary to grasp the relations between them. Hegel presents family, civil society, and the state not just as different corruptions of the common, but as a dialectical progression, defined by their relations, by contradiction and negation.

In Empire Hardt and Negri argued that various fundamentalisms, returns to family, religion, and the state, are themselves made possible by the abstractions and connections of capital. Which is to say that corruptions of one form of the common produce a kind of fetishization of other forms of the common: globalization produces a return to the family. In my view Deleuze and Guattari’s Anti-Oedipus, and the conceptual apparatus of deterritorializarion and reterritorialization remains a crucial and even exemplary way to think about these odd anachronisms of the present, but this would take us too far off topic.

I am not arguing for a return to the dialectic, the reference to Deleuze and Guattari should make that clear, but for at least a conceptualization of the relation between the different corruptions of the common. Finally, and I am aware that this heresy, it is worth asking the question as to what extent Hegel’s ethical life (Sittlichkeit) can be reconsidered as a kind of figure of the common, or, if at least not the common, then transindividuality. I take it as foundational that any new politics capable of countering capitalisms subordination of social relations to the imaginary atoms of individuals and the axioms of accumulation will require a new understanding of social relations, if not relations in general. It is also true that the language and concepts to develop this are sorely lacking. Philosophy has been dominated by the spontaneous ontology of individualism, and to what extent the common appears it appears in its corrupt form as family, nation, and corporation. In other words, philosophy has been dominated by ideology. Developing these concepts may require a rereading of the history of philosophy. Perhaps it is time to stop being so afraid of Hegel.

Posted by unemployed negativity at 8:52 PM