Bending the Stick: The Returns of Political Economy and Philosophical Anthropology Into Philosophy

“What is involved here is the conceptualization of the field of immediate coincidence between production and ethics, structure and superstructure, between the revolution of labor process and the revolution of sentiments, between technology and emotional tonality, between material development and culture. By confining ourselves narrowly to this dichotomy, however, we fatally renew the metaphysical split between “lower” and higher, animal and rational, body and soul—and it makes little difference if we boast of our pretensions to historical materialism. If we fail to perceive the points of identity between labor practices and modes of life, we will comprehend nothing of the changes taking place in present-day production and misunderstand a great deal about the forms of contemporary culture.”

Virno’s idea of the immediate coincidence between affects and economics not only characterizes his own work, or much of it (some of the recent work is focused more on the problem of philosophical anthropology, which is perhaps already alluded to in the quote above), but several other works in philosophy. These works stem from two central conditions: First, a breakdown of a certain version of Marxism for which the relationship between production and ethics always passed through the necessary mediations of the base and superstructure, law and politics, hence the immediacy. Second, as the quote above suggests, this change is also brought about by the transformation of capitalism itself, a transformation that Virno will later qualify according to the centrality of the very question of the human in the production process: the increasing importance of not just language and thought, but of human flexibility and neoteny in post-Fordist capitalism. As Virno argues the current regime of labor with its combined demands of professionalization and precariousness results in a model of labor which is not so much about particular skills, talents, and knowledge, but the capacity to acquire skills, knowledge, etc. We sell species being, not the alienation from species being. “Human nature returns to the centre of attention not because we are finally dealing with biology rather than history, but because the biological prerogatives of the human animal have acquired undeniable historical relevance in the current productive process.”

I am interested in both this return to philosophical anthropology, to a speculation of the fundamentals of human existence, and political economy, to an unmediated examination of the economy in terms of its effects. In the last decades of the last millennium, both of these things were forbidden: economism and humanism were epithets to avoid at all costs. What interests me about this recent turn, not just in the work of Virno, but others, is not so much the return of the repressed, but this idea of an immediate coincidence. of a combination (or is it a dialectic) in which the human is displaced by its immediate entry into the economic and the economic is understand as constitutive of the human. Immanence is perhaps the key to not overcoming the old taboos, but understanding the present.

Moreover, to cite Stiegler, who I will be discussing in a minute, the retreat from political economy by philosophy has been coupled with a retreat in engagement at the level of politics. I would add to this that similar perils confront any philosophy that leaves the anthropological terrain, which is distinct from anthropology or humanism. This terrain covers that highly ambivalent intersection of culture and nature that constitutes human life, what Virno calls historico-natural and Balibar calls anthropological difference. I am thinking here of the long night of “social construction” in which the only thing that one could say about anything, desire, labor, identity, language, etc., was that it was socially constructed, contingent not necessary. This important emphasis on construction crashed upon the shores of its unexamined ontology (everything is socially constructed) and its non-existent politics (we should construct things differently…or better)

All of this is a preamble of sorts for a review of two of Franco Berardi’s recently translated works (The Soul at Work and Precarious Rhapsody) and Bernard Stiegler’s Pour une nouvelle critique de l’economie. They are connected by this theme, and the much more contingent fact that I just happened to read them at the same time.

To begin with Stiegler, an intersection of interests (primarily Simondon) has drawn me to read some of Stiegler’s works, the translated books and a few of the shorter books in French. I remain ambivalent, however, and not ready to dive in. When it comes to Stiegler, diving in really is diving in: he seems to come up with multi book series the way the rest of us come up with shows to watch on DVD. There is a little of a bad infinity to these writings as they gravitate around the same these and ideas. Anyway I was curious enough of his attempt to take on the economy that I read his new book (at least it was his new book, he probably finished something else by the time I wrote this blog post). 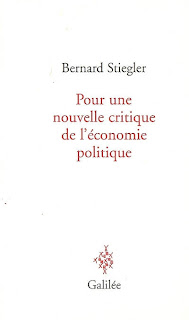 Stiegler approaches the economy through some of the central themes of his work: individuation, borrowed in part from Simondon, and his general idea of grammatization (the word he uses in this book), which is to say the exteriorization of memory, in tools, writing, and devices, which is constitutive of history and humanity as such. As Stiegler argues, such grammatization is a condition of proletarianization: workers can only be reduced to simple abstract labor power if the machine can take on their specific memory.(The term grammatization, my awkward and literal translation, obviously has its origins in Derrida’a trace, but like all of Stiegler’s concepts it is fundamentally eclectic: drawing from Deleuze and Guattari’s theory of the inscribing socius.) This is also where the new dimension of the critique comes into play, Stiegler criticizes Marx for not taking into account consumption. Consumption is another kind of proletarianization, a loss of subjectivity and individuation. Just as the machine at work takes on the subjectivity of the worker, the memory and knowledge, the machines at home, in consumption, does the same. Proletarianization becomes a general condition, distinct from pauperization.

As I have noted previously, Stiegler’s critique seems to overlook the activity in modern consumption. However, his critique, which focuses on the economy as a phenomenon of subjectivity and belief has some merit. Drawing on the concept of externality, he argues that we lack the positive externalities, education and sociality, that make it possible to combat the negative externalities of capital. The subjectivity that capital produces is incapable of combating its effects, and ultimately even of sustaining it.

Franco “Bifo” Berardi belongs to the same generation as such thinkers as Antonio Negri and Paolo Virno, but with the exception of his piece on the semiotext(e) collection on Autonomia, much of his work has not been translated into English. This has all changed rather abruptly with the recent publication of The Soul at Work: From Alienation to Autonomy and Precarious Rhapsody: Semiocapitalism and the pathologies of the post-alpha generation. The first book is a necessary update to the concept of alienation: a word that is as unavoidable as it is discredited, as well as an attempt to situate the Italian Marxist tradition within the larger context of the Frankfurt School and French Thought. With respect to the first aspect the book points out a positive dimension of alienation, alienation as the basis of refusal, in the thought of Tronti, juxtaposing his work with Marcuse as two very different reflections on the same period. As Bifo writes about this positive dimension: “Alienation is then considered not as the loss of human authenticity, but as an estrangement from capitalistic interest, and therefore as a necessary condition for the construction—in a space estranged from and hostile to labor relations—of an ultimately human relationship.” Thus, inserting a necessary political dimension into the debate on alienation.

The real difference with respect to alienation, the real reason that it has fallen out of favor, is not political, but historical, concerning the change of the economy. Alienation corresponded to the Fordist economy, to a production process in which information and communication flowed only in one direction, in which work imposed a mute necessity on laboring bodies. This has fundamentally changed, and with it the situation of the soul in work. This new situation cannot be accurately captured by alienation. Bifo’s work has the benefit of underscore the political and economic transformations underlying the theoretical shifts from alienation to the production of subjectivity. It is not a matter of a change of trends, but a change of the real conditions. The new work process does not so much alienate subjectivity, but produces it. The worker is not excluded from the production process, but brought into it, compelled to communicate and compete with all of their being. Alienation and the old pathologies will not describe this situation. 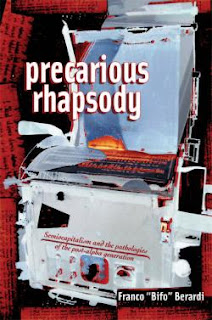 Precarious Rhapsody is the most concerned with this shift and the new pathologies. New pathologies brought about by the shift to semio-capitalism, capitalism of signs. As Bifo writes:

“Semio-capital is in a crisis of overproduction, but the form of this crisis is not only economic but also psychopathic. Semio-capital, in fact, is not about the production of material goods, but about the production of psychic stimulation. The mental environment is saturated by signs that create a sort of continuous excitation, a permanent electrocution, which leads the individual mind as well as the collective mind to a state of collapse.”

Much of Bifo’s analysis comes close to Stiegler, his “post-alpha generation” refers to a generation that learns more words from machines than their others, which justifies my review of the two together. Bifo even shares some of Stiegler’s faults, tending toward an apocalyptic understanding of this shift. Bifo like Stiegler sees a loss of sensitivity and attentiveness to others in the digital world, connect it to a particular pathological incident (the Virginia Tech Shooting). Stiegler and Bifo overlap in an apocalyptic tone of sorts. However, such limitations of their pronouncements shouldn’t overshadow their strength. This strength is most clearly pronounced in Bifo who uses the term compositionism to define Italian workerism: the reference is not just to class composition, but to all of the technical, economic, cultural, and political dimensions that make up the conjuncture.

We must think together the new pathologies of the present, ADD and depression; the new technologies, social networks; the new regimes of regulation, neoliberal deregulation; and the new productive classes; the cogitariat, if we are to make any sense of the present. The old categories, and taboos, cannot restrict this, humanism, economism, etc. all must be reexamined.

When I clicked over to read this, I read the title as "Bending the Shtick," and thought you had coined one of the best puns I'd encountered in quite a while. Oh well -- I'll attribute it to you in any case.

I wish that I thought of that, now I just have to figure out a way to use it.