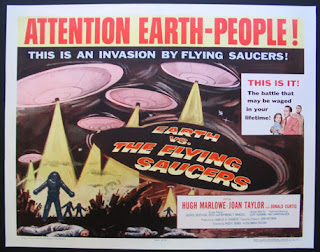 Aliens have made it the news at least three times in the last week. This is fairly impressive considering the fact that there have been no shortage of actual events to report on (stock market collapse, the fallout from the Uk riots, Syria, etc.). This could be taken as symptomatic of the usual August slow news cycle, less a reflection of an actual lack of newsworthy stories than a collective decision not to reflect on the world.  Past Augusts have brought us such stories as "Shark Attack Summer." August is the month dedicated to frivolous stories that make the rest of the years sound bytes  and pseudo-events look serious by comparison. Taken together, however these reports construct an interesting snapshot of our existing political imaginary, the reflection of our social and political condition in our avoidance of it.
The first instance of Aliens in the news was from Paul Krugman, who argued that the build up to prepare for an alien invasion would be precisely the stimulus program that this country needs.


This has led some would be Rorschachs on the right (excuse the Watchmen reference) to conclude that Krugman was involved in a liberal plot to fabricate an alien invasion in order to advance One World Government.  (Because openly declaring how useful a fake alien invasion would be is the perfect way to construct a fake invasion). Aside from such hystrionics Krugman's joke is indicative of how impossible it would be, given the prevailing political and economic ideologies, to pursue a Keynesian stimulus project. For the past few years of the recession, Krugman has written numerous columns and editorials representing the Keynesian point of view, the point of view that we were supposed to return to after the collapse of neoliberalism, advocating for government spending focusing on unemployment as an antidote to our economic situation,  but now he even seems to understand that given our political climate such an idea is just as likely as an alien invasion.


This connection between what is politically feasible and what is imaginable is underscored in the next appearance of Aliens in the news. A study was published that argued that Aliens might attack us because of our destruction of our environment. As the report states,


"A preemptive strike would be particularly likely in the early phases of our expansion because a civilisation may become increasingly difficult to destroy as it continues to expand. Humanity may just now be entering the period in which its rapid civilisational expansion could be detected by an ETI because our expansion is changing the composition of the Earth's atmosphere, via greenhouse gas emissions," the report states.


"Green" aliens might object to the environmental damage humans have caused on Earth and wipe us out to save the planet. "These scenarios give us reason to limit our growth and reduce our impact on global ecosystems. It would be particularly important for us to limit our emissions of greenhouse gases, since atmospheric composition can be observed from other planets,"

Thus, the scenario shifts from The Watchmen (or the Outer Limits episode Krugman referred to) to the The Day the Earth Stood Still (or at least its remake, and probably several other films in which aliens premptively destroy humanity because of our destructive tendencies). In this way it dovetails nicely with the fringe right wing response to Krugman, especially since global warming has often been presented as a hoax perpetuated to consolidate government power. Which brings us to our final story, the official right wing response to the study (now erroneously portrayed as yet another frivolous expenditure of tax dollars, as a NASA study) on Fox News:

At the end of this segment we learn that Fox News viewers would overwhelmingly prefer that we prepare to fight alien invasions rather than curtail emissions of green house gases, the former scenario being much easier to imagine than the latter, not to mention way cooler. (This is illustrated by the clip itself which qualifies "global warming" as supposedly, but does not do the same for aliens). At this point  these three stories return full circle, Fox news viewers end up unwittingly reinforcing Krugman's point that it is easier to imagine an alien invasion than some large scale investment in a "green economy." Beyond that what do these stories tell us? Fredric Jameson's too often cited remark that "It seems to be easier for us today to imagine the thoroughgoing deterioration of the earth and of nature than the breakdown of late capitalism,"comes to mind. Only now the situation is even worse, we cannot even imagine the ecological destruction of the planet because doing so would involve some change in the here and now, some demand that we live differently, so we can only imagine aliens as a completely exterior force, as the rupture from the outside.


My point here is not to argue for some Keynesian project or to use the threat of aliens as a kind of secular  (and green) judgement day, but to illustrate the limits of the current political imaginary. The limits of our world are not just the atmosphere and environment but include what we are capable of imagining, visualizing, and thinking. The ongoing collapse of the world economy and the global environment point to the necessity of imagining other relations, other conditions, than our current ones. However, that the image of earth unified, of a collective organized project, lingers even in the distorted summer blockbuster fantasy of a response to an alien invasion suggest that the promethean imaginary is not entirely exhausted, entirely worn out.  It has only retreated to the realm of fantasy, to the image of a unified humanity against some global threat. What would it take then to realize that the threats to our survival, to the survival of this planet, have already arrived, that the alien is us?

Posted by unemployed negativity at 6:29 PM

There is one glaring absence in your list of recent UFO/Alien coverage.

Haha, If I was an alien, Binghamton would be the last place that I'd visit.