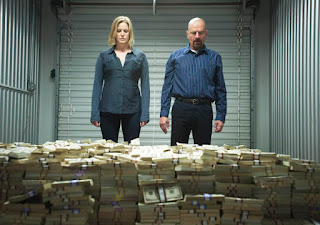 In Book Two of  the Politics Aristotle famously criticizes those who pursue wealth without limit, those who fail to understand that wealth acquisition should be subordinated to household management. Much of the discussion on this passage focuses on the distinction between "proper" and "improper" use as precursors of use value and exchange value. The proper use of a shoe being wearing it and the improper use being its exchange. Those who pursue wealth, who endlessly accumulate, forget that the proper use of money is a means of exchange, not accumulation.


The problem with this focus on propriety and impropriety, aside from the fact that its terminology is often used to introduce a moralism into use value that is absent from Marx's thought, is that Aristotle's real focus is not on the impropriety of exchange, but the importance of living well. Aristotle argues that those who accumulate wealth endlessly have forgotten about living well, about a life dedication to action and contemplation. As Aristotle writes, "The reason they are so disposed, however, is that they are preoccupied with living, not with living well.” They have lost sense of the qualitative ideal of living well in the face of the quantitative accumulation. The parallel that Aristotle draws between living and accumulating is interesting. In each case the focus on the quantitative makes it difficult to draw a limit, to say enough. Just as it is nearly impossible to say how many years of life would be enough it is difficult to say how much money is enough. Living to the ripe old age of eighty sounds nice, but living to eighty-five sounds nicer: a million dollars sounds nice, but five million sounds nicer.

Season five of Breaking Bad asks the question, "how big does this pile have to be?" How much is enough? Walter Started his meth business with a specific figure in mind, a limited amount to provide for his family. I forget the specific amount, but it is modest, the equivalent of a non-existent pension. As Walt "breaks bad" he loses sight of this limited goal, shifting from the "meth business to the Empire business," and is not satisfied with the prospect of even making five million dollars. Walt exemplifies Marx's hoarder, for whom any quantitative limitation is unacceptable. As Marx writes, “This contradiction between the quantitative limitation and the qualitative lack of limitation of money keeps driving the hoarder back to his Sisyphean task: accumulation. He is in the same situation as a world conqueror, who discovers a new boundary with each country he annexes”


Two reasons are given for this change. First, as I already mentioned, the show continually demonstrates the hidden costs of the illegal operation, as earnings disappear in the face of bribes, money laundering costs, and so on. Competition costs. Second, there is the backstory of Walter's role with "Gray Matter" a biotech company which he was bought out of early for five thousand dollars. The company is now worth nearly two billions. In the first case accumulation is necessary to even stay still, to hold one's ground. The second, however, demonstrates that accumulation is not just situated against real costs but imagined gains. One could always make more, or could have made more. Accumulation has no limits because it is always measured against other accumulations.

Walter White's attempt to beat "Gray Matter" can also be interpreted as a kind of revenge. Walter's Empire is not just a quantitative accumulation but a qualitative transformation, a matter of how he wants to live. The parallel that Aristotle establishes between accumulating wealth and accumulating life is instructive. In the first season, when Walt is initially diagnosed with cancer, he refuses chemotherapy, refusing a qualitative accumulation of years. His argument is as follows:

"These doctors...talking about surviving. One year, two years, like it's the only thing that matters. But what good is it, to just survive if I am too sick to work, to enjoy a meal, to make love? For what time I have left, I want to live in my own house. I want to sleep in my own bed. I don't wanna choke down 30 or 40 pills every single day, lose my hair, and lie around too tired to get up...and so nauseated that I can't even move my head. And you cleaning up after me? Me, with...some dead man, some artificially alive...just marking time? No. No. And that's how you would remember me. That's the worst part. So...that is my thought process, Skyler. I'm sorry. I just...I choose not to do it."

Walt refuses living in favor of living well, at least initially. He later accepts chemotherapy, but his desire to live on his own terms only intensifies. Walt's speech and refusal is instructive. The desire to live on his own terms, to be seen as a man, underlies his task of accumulation from the beginning in the terms of the masculine ideal of a provider but it becomes increasingly important. This desire to accumulate status along with wealth starts small with the alias of "Heisenberg" but reaches its zenith when Walt demands that a rival drug dealer say his name. Although Walt's preference for a quality of living is  also visible in the scene where he sells his Aztek, a car with thousands of miles in it, for a flashier car.  Accumulation, the quantitative accumulation of wealth, cannot be separated from a qualitative transformation. It is not a matter of "living" versus "living well" but of living redefining living well in its own image.

Posted by unemployed negativity at 5:50 PM