How Not to do Dystopia in a Dystopia: A Brief remark on Elysium 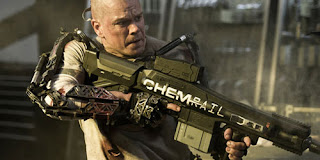 In an instance of "first time as protest, second time as product" Elysium has been described as a movie of the 99%, a film that expresses the same sentiments as Occupy Wall Street. I think that this is accurate, but not in the way it is meant. What Elysium expresses is not some radical message in the trojan horse of a late summer blockbuster, even less some kind of Marxism, but the limits of the populist imaginary of the Occupy moment.


Elysium gives us a world divided between the rich, living in the idyllic floating space station of the film's title, and the poor, living on a polluted, overcrowded, and impoverished Earth. It can represent hierarchy (in a particularly heavy-handed way), but what it cannot present or imagine is exploitation. The relation between the wealth and luxury of those in the space station and the squalor below is one of pure exclusion--the rich simply hoard their resources, keeping them from the poor out of spite. The film's world becomes absolutely incoherent when it tries to present the working conditions that sustain the two worlds. Max (Matt Damon), the film's protagonist works at a factory manufacturing robots, the very robots that oppress the poor and secure the rich. His job is presented as an anomaly against a backdrop of large scale unemployment. On his daily walk to work he is accosted by street kids looking for handouts and his old friends who want him to rejoin his place in the lumpenproletariat (he was a car thief). Immiseration is imagined, but not explained.

While this idea of a society in which security remains the last possible place of employment is suggestive, calling to mind the massive prison and security industry in this country (as in this great song by The Evens), the robot factory raises more questions than it answers. Most obviously why don't the robots just build other robots? While it would be too much to expect the film to break into a discussion of the tendency of the rate of profit to fall (perhaps delivered by Laurence Fishburne in full Morpheus mode), its difficulty in imagining exploitation leads its narrative and structure to collapse into other, less satisfying explanations. As many film critics have pointed out, Jodie Foster and Sharlto Copley offer fairly one-dimension portrayals of evil: the former as ruthless bureaucratic power, the latter as barbaric viciousness (Dick Cheney and Blackwater). The film's narrative and thematic collapse into good versus evil is perhaps explained by the interview with Neill Blomkamp, cited above, in which he states the following as his explanation of the film's grim outlook:

"We have biological systems built into us that were very advantageous for us, up until we became a functioning civilisation 10,000 years ago. We are literally genetically coded to preserve life, procreate and get food – and that's not gonna change. The question is whether you can somehow overpower certain parts of that mammalian DNA and try to give some of your money out, try to take your wealth and pour it out for the rest of the planet."

Blomkamp's solution to this dire state is some kind of genetic re-engineering of the human genome. The inability to think historically, to think in terms of economic and social structures, takes us straight from moralism, the evil and greedy 1%, to totalitarianism, the attempt to remake human nature. This is perhaps the ultimate merit of the film, to illustrate the liberalism/totalitarian dialectic. How seeing the world only in terms of individuals and their morality, in terms of greed and generosity, leads to a remaking of human nature as the only possible solution. The film perhaps illustrates the old dictum that all science fiction is about the present, in this case illustrating the deadlock of the current political imaginary.

Speaking of work, political imaginaries, and other such things, I had a talk on such topics with the folks at Exist Anew. You can listen to it, and check out their blog and podcasts, here.

Posted by unemployed negativity at 9:10 AM

I just watched the movie and knew that it was simply reiterating the logic of today's economopolitical stage, but couldn't quite put my finger on a certain...je ne sais quoi. Now I see. The moralistic heroism that avoids all of the real issues. Imagine a critical re-make? Matt Damon and fellow Mexicans organizing a global strike? Think it would sell as well?

This really clarifies a reason why I get irritated many times speaking with family and friends about different social issues. For some of them, there seems to be an inherent inability to think socially, politically, economically. The discussion always turns into a naive moralistic narrative about human nature, with the implicit logic being, as you pointed out, that the only feasible option is to change human nature...