Gilles Deleuze writes, "Concretely if you define bodies and thoughts as capacities for affecting and being affected many things change. You will define an animal, or a human being, not by its form, its organs, and its functions, and not as a subject either; you will defined it by the affects of which it is capable...For example: there are greater differences between a plow horse or draft horse and a racehorse than between an ox and a plow horse. This is because the racehorse and the plow horse do not have the same affects nor the same capacity for being affected; the plow horse has affects in common rather with the ox."

I thought of this quote while I was watching both an ox pull and a horse pull at the Fryeburg Fair. I thought of because first it is true (draft horses are huge, and strong), but then I thought about the fact that I was thinking about it. I am not sure, but I think that I was the only person at Maine's largest agricultural fair watching a livestock competition thinking about Deleuze's comments on Spinoza. Yes, the fair was a glimpse into another world, a world where adolescents have their own teams of oxen to train for competition. As my father said, it is good to get out of one's world. In my case a world where everything reminds me of some philosophical reference, The Simpsons, or Buffy (usually all three). It is also good to see that there still are different worlds, it is all to easy to imagine the world (or even this country) to be more homogenous than it is--to imagine a world in which people "now read the same things, listen to the same things, see the same things, go to the same places, have their hopes and fears directed to the same objects" (That last quote is J.S. Mill, or maybe Rupert Giles, I honestly cannot remember which). Yes, I am glad to live in a world where there are still agricultural fairs.

Speaking of outings, this weekend I attended Sacred & Profane, an art show held in a decommissioned WWII Bunker on an island. It starts with a ferry ride and ends with a picnic, and who does not like that. I just like the idea of an old military bunker being used for art. However, this was if not my world, at least an adjacent planet.(Photo by Scott Whitton) 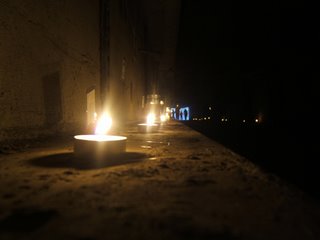 On the general theme of updating I have to say that I have been pleased with my music purchases as of late. I have the new TV on The Radio, The Decemberists, and The Thermals in heavy rotation, and they are great in their own unique and special way--like snowflakes.
Posted by unemployed negativity at 5:15 PM

Email ThisBlogThis!Share to TwitterShare to FacebookShare to Pinterest
Labels: Art, Me, Music