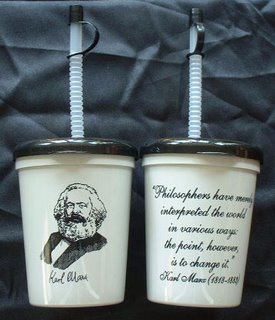 I end up teaching Marx, a lot. Sometimes I try to avoid it, but it is hard to teach classes on political philosophy, nineteenth century philosophy, etc. without teaching Marx. What I notice most of all is that the whole dynamics of the class changes when Marx comes up, when I teach Aristotle, Machiavelli, Spinoza, Arendt, etc., I feel like I really have to sell it, convinve them why this is worth reading, with Marx they may not know why, but at least the relevance has already been established. As Althusser says "philosophy should be judged in terms of its effects." Well Marx has had effects, not all good, some nightmarish even, but effects nonetheless.

With Marx I am already dealing with a misreading. This can lead to some amusing responses. Case in point, a discussion of "Estranged Labor."

Student: "It sounds like Marx is on the side of the workers."
Me: "You could say that, yes."
Student: "Then why is he a bad guy?"

Now, not all responses are that amusing. Some can be downright interesting, even daunting. Today I was teaching some short pieces including "The Power of Money in Bourgeois Society" and the first question was about money in communism, could it be dispensed with, etc? Now this question is difficult to answer, especially for a class that is only reading the "1844 Manuscripts." I did a passable job, or at least I avoided loosing the whole class by discussing Marx's critique of "time chits", but it occurred to me while answering that this student really wanted to know this, it was not an academic question.

I have also noticed a particular impass in teaching Marx. Most students grasp the critique of capitalist society and agree with at least part of it. However, at the same time they are aware, albeit vaguely, that some attempt to put these ideas into practice went horribly wrong. Caught between the critique and the solution, students are often left in a position of impotence, in which all attempts to change things are doomed to fail. As Homer Simpson says, "Never ever try." Thus despite Marx's best efforts (and mine) students end at the place where they began: cynically aware that everything is bad, and any attempt to change it can only get worse.
Posted by unemployed negativity at 3:45 PM

Email ThisBlogThis!Share to TwitterShare to FacebookShare to Pinterest
Labels: Marx, Me, University

Interesting that I just finished Marx in my political philosophy class, and assigned "Estranged Labor" (along with the inevitable selections of Engels' Anti-Duhring). My weekly indoctrination also consisted of trying to "sell" Marx, and I used three different startegies: 1) We are all Marxians in the sense that we accept the importance of the economy in our social relations (the crass method of populism and dumbing down); 2)Marx is not a communist, and is not associated with communism as we have known it: he is a socialist and a wannabe communist, but it was Lenin who set up commumism as a failed political system (the Nietzschean method of blaming it all on a St. Paul or the institution builder to sanctify Jesus or the destructor; and 3) Commumism is dead but socialism is not: not only it is present to day as social force and tendency towards an organzied political system (from Bernie Sanders to Latin American socialist revivalisms, etc.) but also as something that never left us and has always been with us (aspects of the welfare state related to nationalized or socialzied apsects of production and social organization) and is even founded on "natural" communalism, family, and even the "gift" as opposed to private propoerty.. This last argument plays well, and saves Marx... Yes, I know, none of this makes sense--but to my students, it does. We are all pimps of meaning(s)... that's one way to prostitute "Marx"...