The Pop Life of Mario Savio 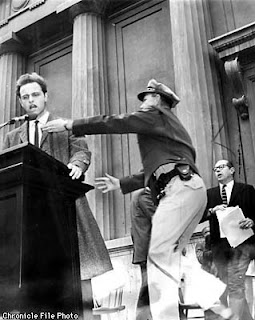 On Friday I finally got a chance to see Half Nelson. I had high hopes for the film, which is usually the perfect set up for a let down. However, in this case the film more than met my expectations at least when it came to the teaching scenes. In the film Ryan Gosling's character decides to teach eighth graders lessons on dialectics, and a dialectical conception of history; history defined by opposition, contradiction and conflict. (It is because of this drive to teach something that is both too difficult and yet very important, that I found myself identifying with the Gosling character; despite the fact that I have never taught in an inner city school, coached basketball, or had anything even resembling a drug habit.) Hands down my favorite scene in the whole film involved Gosling showing a clip of Mario Savio's speech before the Free Speech Movement sit-in. The quoted passage is as follows:


Now I love that speech, who doesn't? Oh yeah, right, most people living on this planet, for whom it is just overinflated Marxist rhetoric. The inclusion of the speech itself in the film (as well as the inclusion of Pinochet's CIA sponsored coup, and other events from history) would already put it high on my list of films of the year. It is what happens after that makes the film stand out. Gosling asks the students what Savio means by machine. One student responds, "robots and stuff?" (It is that moment that I identify with, you have your perfect passage, your perfect opening question, and suddenly you are derailed by an answer that you could not possibly anticipate.) Later, over the course of discussion, after suggesting the possibility that the machine is a metaphor, he gets the class to see how we are all part of the machine. "We are all part of the machine," that is more than one expects from a Hollywood movie.


I could say more about the film, especially about its use of dialectics, which are not just a topic for classroom discussion but a structuring principle of the film itself. The film is riddled with dialectical pairs: student/teacher, dealer/addict, etc. It also has a few moments of what could be considered "dialectical montage," shots inter-cutting the drug dealer and student on rounds with the consumption of drugs. I actually take the drugs to be a metaphor through which the "ethics of consumption" are confronted by the "ethics of the producers." The teacher is horrified that his favorite student is involved in the drug trade, never really considering his complicity in that trade. In the same way we are all horrified with the sweatshops and global labor conditions, never really considering our complicity in that trade.

The odd thing, from which this entry gets its title, is that this is the second time in the last year that Savio's speech has appeared in pop culture. It was also cited in the season two finale of Battlestar Galactica, well not so much cited as appropriated. It is Tyrol's speech against labor conditions on New Caprica. Although, in this case the machine would have to include "robots and stuff," since they are working for the cylons.


Hegel said that all great events in history happen twice. He forgot to add: the first time as tragedy second time as pop culture injoke.

Posted by unemployed negativity at 10:26 AM