Preemptive Strikes (of a philosophical variety) 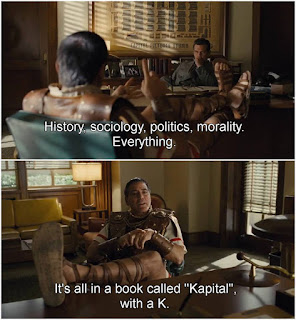 Materialism is a paradoxical philosophy, for multiple reasons, not the least of which is that on some fundamental level it diverges from the basic premise underlying the very practice of philosophy. This premise is the fundamental idea that the best argument always wins, that the true has an efficacy in and of itself to overcome any illusion, error, or bias. However, if we take as one of the defining characteristics of materialism Marx’s dictum that “Life is not determined by consciousness, but consciousness by life,” then it is clear that it is “life,” understood as material conditions and social relations, and not the better argument that has the last word. The question then arises, how to do philosophy in a materialist manner. How do you argue when you recognize that arguments have only a limited force against ideologies, which are sustained and embedded in material practices?


This question has in part been answered, albeit in different ways, by Spinoza and Marx through what I would call, for lack of a better word, a preemptive argument. What do I mean by this? Lets take Part one of Capital, the famous section on the commodity. Marx begins with a riddle—Where does exchange value come from? The answer to this question is of course labor power, labor power is the source of value. What Marx stresses, however, is the indifference of this problem to the solution, recognizing that labor, or labor power, is the source of value does not change the appearance of commodities. Fetishism is the irreducibility of the illusion to an argument. As Marx writes: “The belated scientific discovery that the products of labor, in so far as they are values, are merely the material expressions of the human labor expended to produce them, marks an epoch in the history of mankind’s development, but by no mean banishes the semblance of objectivity possessed by the social characteristics of labor.” The fetish does not disappear just because one recognizes it as such. Marx thus ends the section on commodity fetishism with a discussion of other social relations, other modes of production, where commodity production does not rule. These examples are Crusoe on his island, a medieval society, and a society of free-producers. These examples are necessary, in that the underscore the fundamental point that moving beyond fetishism is not simply a matter of developing critical consciousness, but of ultimately transforming social relations. However, they are also preemptive, in that they introduce an idea of social structure, and perhaps even an initial sketch of communism, before Marx fills out the constitutive conditions of the mode of production.

A similar “preemptive strike can be found in the Appendix to Part One of Spinoza’s Ethics. The first part of the Ethics develops Spinoza’s understanding, God as an immanent cause, which will later be summed up in the provocative formulation “God, that is Nature.” Such as conception blatantly flies in the face of what is generally thought of as God. It is perhaps for this reason that Spinoza writes the appendix, providing an explanation as to how this “prejudice,” with its twin poles of the anthropocentric God and the free subject, comes into existence. Such an explanation presupposes an understanding of the human mind and desire, all of which will be developed in the second and third parts of the Ethics. “Of course this is not the place to deduce these things from the nature of the human mind. It will be sufficient here if I take as foundation what everyone must acknowledge: that all men are born ignorant of the causes of things, and that they all want to seek their own advantage, and are conscious of this appetite.” What Spinoza takes as foundational, the ignorance with respect to causes that characterizes inadequate ideas, and the force of appetite, and desire, in existence, is of course developed later in the Ethics according to the order of common notions. Here Spinoza takes, or seizes [capiam], this foundation from what is commonly accepted, or what everyone must acknowledge. (It is an argument from experience, to cite Pierre Francois Moreau’s important study of Spinoza). It is from this combination of ignorance and desire that we get the idea of not only freedom, we are ignorant of the way that we are determined, but of a God that freely acts according to human-all-too-human desires. This ignorance and desire form the basis of a particular character, a particular temperament, ingenium, that is as much produced, by habits and actions, as productive of imagination and ideas.

There is a similarity between these two “preemptive strikes,” albeit a week one. In each case the argument necessarily gets ahead of itself. This necessity is demanded by the radical nature of the intervention, a radical rupture with a common sense of free individuals and value possessing commodities. The reader of Marx or Spinoza sees the world in terms that directly contradict their argument, perceiving a world in which commodities are embodiments of value and/or God acts with an always “mysterious” purpose. Such a reader would most likely not be responsive to their respective arguments. Spinoza and Marx do not respond with a better argument (how could they, the first parts of Capital and the Ethics are the picture of argumentative rigor), but indicate that the “reasons” underlying such a rejection are not reasons at all. They are material conditions, social relations, desires and affects.

Of course philosophers of the standard idealist variety will always call foul, claiming that such a discussion of the “cause” of ideas is not an argument for one's position. Arguments about the social conditions of particular ideas and points of view always risk descending into a name calling session about “bourgeois ideology” or “superstition.” They are seen as ad hominem arguments extend to society. Such arguments between idealists and materialists are perhaps irresolvable. In the midst of this argument, however, it is important to recognize a differend of sorts about the nature of thought itself.

Posted by unemployed negativity at 12:03 AM