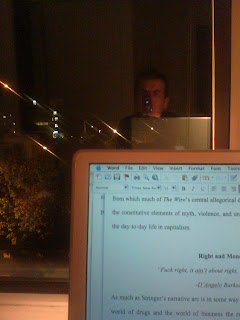 It perhaps goes without saying that at any given moment I am ruminating over some quote from Marx. As of late it has been this one from the Grundrisse:

Marx’s interest in presenting this is at least for the most part to stress the historical nature of the category of the individual. However, I think that it could be understood as particular mode of sociality that is paradoxically social in its isolation (isolation as a general social experience) and isolated in its sociality (market relations as a precondition of individuality). I could go on about this again, and probably will, but what struck me about this idea recently is the discovery of a precursor of it in the most unlikely of places: Descartes’ Discourse on Method
﻿﻿﻿
“…[T]his desire made me resolve to take leave of all those places where I could have acquaintances, and to retire here, in a country where the long duration of the war has established such well-ordered discipline…and where among the crowds of a great and very busy people and more concerned with their own affairs than curious about the affairs of others, I have been able to live as solitary and as retired a life as I could in the remotest deserts—but without lacking any of the amenities that are to be found in the most populous cities.”

Much could be said about this idealization of the anonymity and security of early modern life, the life of the emerging city, and how it relates to the famous problem of Descartes’ borderline solipsism: the cogito cut off from others, pondering the men across the street, who very well could be automatons. What is striking is the manner in which an emerging social reality immediately becomes an epistemological ideal. The world is thought, and recreated from the perspective of the isolated individual. Producers who work in isolation and only meet through the anonymity of the market is not just an emerging economic reality (although, on this point it is important to note how ahead of the curve Descartes is), but an ideal for the comprehension of reality. As Adorno defines this problem:

“The intellectual, particularly when philosophically inclined, is cut off from practical life: revulsion from it has driven him to concern himself with so-called things of the mind. But material practice is not only the pre-condition of his existence, it is basic to the world which he criticizes in his work. If he knows nothing of this basis he shoots into thin air…[H]e hypostatizes as an absolute his intellect which was only formed through contact with economic reality and abstract exchange relations, and which can become intellect solely by reflecting on its own conditions.”

For Adorno the less one thinks of economic reality, the more one thinks in line with it. Adorno’s extended aphorism on this takes on a characteristically negative tone, it is a lose or lose situation. Either one fails to think of material reality, and its fundamental categories and relations reappear in disguised form, or one thinks of it, and philosophy loses its specificity. To put this problem in a different register, that of Negri, we could say that Descartes politics is his ontology, and vice versa, and this connection between politics and ontology is underwritten by a social dimension, by the way in which labor and society are reflected in thought. Society is immanent to thought before becoming its specific object.

Jean-Luc Nancy’s essay “Being Singular Plural” puts forward two crucial statements in his reflections on being as being-with. First, is that isolation, separation, and solitude must themselves be thought of as a kind of sociality. That even the moment of absolute isolation is itself a social moment: this is demonstrated by Descartes own meditations, which even in their isolation are addressed to another. “The ego sum counts as “evident,” as a first truth, only because its certainty can be recognized by anyone.” (This first point is a polemic against Heidegger, who as much as he argued for the constitutive nature of Mitsein continued to see it as primarily a degraded form of existence, as less authentic than the solitary relations with death). Second, Nancy argues that it is impossible to separate sociality, collective existence, from its image, from its representation that is also its falsification. “There is no society without the spectacle because society is the spectacle of itself.” The world cannot be disassociated from its theater, to return to Descartes once more. (This last polemic is against Marxist attempts to separate society from its specular fetishization, including Situationism, which took this problem the farthest). Nancy’s polemics are thus aimed against the two places in the twentieth century that attempted to think social relations as something other the sum total of individuals.

These two polemics against hitherto presentations of the problem of sociality are each predicated on the ambiguity of the “with.” With is the degree zero of relation, an inclusive disjunction, in that it does not differentiate the manner of relation. To say something is “with” something else does not specify its manner of being with: society appears with its spectacle, the desiring machines with their full body (as this last point indicates, I think that Deleuze and Guattari’s idea of desiring machines are an idea of sociality). Whatever appears, appears with: this fact is unavoidable. Thinking is always thinking with.

Sociality is difficult to think because we are already, even always already, immersed within it. Although, and this might be the closest I get to a conclusion here, this always already takes multiple forms that are not reducible. It reflects a historical condition, in the sense that the categories and conditions of thought are always historically produced, but it also reflects, as Nancy demonstrates, an ontological condition, the primacy of relation. These two things are simultaneous, but also in extreme tension. It is difficult to think the social, that is, historical, constitution of sociality along with its ontological constitution. Social ontology remains at the very least a concept of dialectical tension, if not an oxymoron, but an unavoidable one.


Posted by unemployed negativity at 11:44 PM