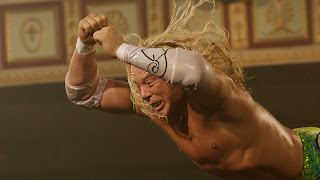 So far I have spent a good part of break getting caught up on movies. Last night I saw Darren Aronofsky’s The Wrestler. The Wrestler is a very visceral movie, like Requiem for Dream. The major difference between the two is that whereas the first dealt with the effects of addiction on the body, the latter deals with the body’s breakdown and decay, its status as a “broken down piece of meat.” A breakdown that has everything to do with the relation of capital to the body.


The film details the latter years of Randy “The Ram” Robinson, played by Mickey Rourke. While Rourke does a good job, I would hesitate to calling his performance acting, at least entirely. Rourke lends the character of Randy his own broken body, and his own story; actor and character have both seen better days. In many ways Randy is left over from the Pro-Wrestling craze of the nineteen eighties, when wrestlers became national or international celebrities, with their own action figures and video games. That craze has passed, but Randy remains, still trying to get buy on the only thing he knows, and the only thing he loves. The film makes a strong connection between Randy’s body and the environment that he lives in, as he passes through the run down buildings and recreational spaces of New Jersey. Places that have also seen better years. The money has left these places, but like Randy they remain, stubbornly refusing to die or disappear.

One of the film’s most interesting scenes follows Randy and another wrestler through one of the many ubiquitous “99 Cent Stores” that can be found throughout this country. The wrestlers scour the cornucopia of commodities searching for cheap aluminum cookie sheets and other things that they can more or less harmlessly beat each other with, drawing a connection between the devalued commodities and their own flesh.

This connection so thoroughly permeates the movie that it could be seen as a corrective to theorists who fail to see the very real and embodied nature of immaterial labor, of the service and entertainment industry. Randy and Candice/Pam, the stripper played by Marisa Tomei, have given their bodies and minds to the production of affects. Although Randy is definitely the one who is worse for wear. There is something oddly affecting in the scenes where he is shown getting his roots died and going to the tanning salon. The particular aesthetic of pro-wrestling, the odd combination of buff and pretty, makes Randy’s desperate attempt to hold onto his looks fundamentally ambiguous and universal. It is the struggle to retain his existence, his labor, when that labor involves appearing as much as capabilities. He could be seen as just an affect of a particular subculture, one with its particular aesthetic, but there is the way in which he is the subject of a consumer society that values only youth and beauty. Randy is trying to hold onto both his strength and his looks; in a way he is playing both the masculine and feminine part.

The conflict between these two characters, their difficult relation as stripper and client, but also friends, raises interesting issues about the nature of alienation in service work. Candice/Pam does not identify with her stage presence, with Candice, keeping it at a distance, preferring instead to see herself as Pam, a mother struggling to raise a boy alone. Randy cannot do this, or at least does not want to, refusing to be called anything but Randy, even at his day job. He does this despite the fact that he is terrified of being recognized, of being seen as a failed former wrestler working at a deli counter. Randy has no life other than that which the ring provides, his attempts to find another job, to connect with family, all fail. Randy is Lukacs’ picture of the virtuoso, someone who in selling his or her body and soul has nothing left with which to resist. When the applause of the audience dies, when the money ceases to come in, he dies as well.
Posted by unemployed negativity at 3:07 PM

"The particular aesthetic of pro-wrestling, the odd combination of buff and pretty, makes Randy’s desperate attempt to hold onto his looks fundamentally ambiguous and universal."

I had always found this aesthetic, not just of pro-wrestling, but of hair bands as well, hilarious. I went to a high school in South Hiram, Maine, where, because I tried to know more and hung around with as many people as I could, I was called "faggot" by the very same guys who I remember loving pro-wrestling and metal. They loved these guys who acted and talked tough, but tried to look pretty. I'd go to Portland, go to punk rock shows, and hang out with a bunch of queer kids who then tried to be tough. I got really big into queer culture as means of articulating an opposition to the harassment. I find that interaction to be particularly interesting. Isn't Said's paradigm of the global other one where the West represents the masculine and rational, and in its movement East, which is interpreted by the West as feminine and irrational, it militantly rationalizes (emasculates) the East by forcing it to take an oppositional stance?

The metal/wrestling-loving antagonists at my school forced Eastward movement on my queer friends and I and we were forced to take up arms.

As something of a follow-up, here is a great piece on work in The Wrestler:
http://www.counterpunch.com/nicolini02132009.html