Revenge of the Children of Marx and Coca-Cola: Remarks on Deleuze, Vertov, and Godard 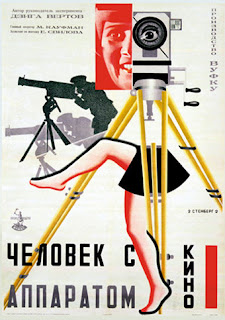 I must admit that at first I did not much care for Deleuze’s Cinema books. There are several reasons for this, first; I simply was not prepared by the sheer breadth of their cinematic references, everything from Vidor to Ozu; second, after Capitalism and Schizophrenia, in which the general problem of signification, of regimes of signs, was developed through an engagement with the problem of capitalism, the rarefied typology of images, movement images and time images, seemed too aesthetic, too much of a reflection on film for film's sake.

My opinion has changed considerably since then. First, I have finally caught up with at least some of Deleuze’s references: Vidor’s The Crowd is still difficult to track down as is Europa 51, and for some reason it took me forever to find a copy of even Winchester 73. However, the major points of reference, Eisenstein, Vertov, Welles, Godard, and Hitchcock are all films I am more than familiar with, and have come to appreciate thanks to Deleuze. This is not want I want to write about. It is the second reaction that has changed as well. I have begun to think that there is a somewhat subtle politics to Deleuze’s film books. More specifically they concern the question as to what it means to act. I would even argue that they are concerned with what it means to act now,  in an age dominanted by images, what we could call, for lack of a better word, the spectacle. As Deleuze writes, in one of the few historical/social asides that dot the arid conceptual landscape of the book, explaining the breakdown between the opposition of movement and action: “There were social and scientific factors which placed more and more movement into conscious life, and more and more images in the material world.” Thus it is possible to triangulate Deleuze’s writing between the work of Paolo Virno (who most succinctly posed the question of acting in the modern world) and Maurizio Lazzarato’s remarks regarding control as power that does not so much act on actions, but on the very possibility of actions.

This shouldn’t seem like such a stretch, after all, in the first book action pretty much defines the movement image. The three variants of the movement image, affection image, perception image, and action image, are defined by their relation to the center of indetermination, to the body/or brain, which introduces the interval/the gap between action and reaction. Film simultaneously underscores and displaces this schema.

It underscores it through the conventions of the shot/reverse shot, the shot of the thing reacted to and the reaction, add a close up of affect to this, a shot of fear or anger, and you have perception, affection, action. This is why Deleuze sees a sensory-motor schema underlying most films. The dominant Hollywood genres, western, detective, comedy, and their variants in the samurai film etc., follow the basic pattern of either S-A-S’ (situation-action-situation) or A-S-A (action-situation-action): in the first, actions transform situations (the duel brings peace and justice to the town) and in the second, actions disclose situations (the search for clues reveals that the conspiracy is deeper than imagined). What links this two is a kind of a connection that links actions to their milieu, actions are entirely adequate to their situations.

At the same time, film has the capacity to completely de-center the coordinates of perception, introducing angles and shots that are inaccessible to our human all too human perception. Deleuze is very enthralled by Vertov’s Man With a Movie Camera, a film which realizes this ideal. It is possible to say that Deleuze’s approach to film is as much Vertovian as it is Bergsonian. The latter may provide a general ontology of images, but this increasingly understood in materialist terms, an immanent plane of images affecting other images. As Deleuze writes, in one of the few passages that cites the terminology of his co-authored books, “The material universe, the plane of immanence, is the machine assemblage of movement images.”

There is thus a tension between these two aspects of cinema: the sensory-motor schema that governs the relation of images and the materialist plane of images affecting other images. However, this tension is not irresolvable. It is possible to see film as revealing the genesis of subjectivity, as the plane of images is constantly folding and unfolding around particular contingent centers. Situations are constantly giving rise to actions and being transformed by them: the plane of immanence is constantly given rise to contingent centers. Which is why the “stylistics” that Deleuze refers to, the particular way of combining (perception, action, and affection) images that defines a director, could also be considered a particular way of resolving the relations between situation and action, a particular way of framing how one acts in a world. One acts differently in the world of Griffiths, Eisenstein, Ford, Kurosawa, or Hitchcock.

What interests Deleuze, however, is the breakdown of this connection between situation and action. “We hardly believe any longer that a global situation can give rise to an action which is capable of modifying it—no more than we believe that an action can force a situation to disclose itself, even partially.” The reasons for this remain both overdetermined (Deleuze refers to “social, economic, political, moral and other [factors], more internal to art, to literature, and to the cinema in particular”) and off-screen, Deleuze does not so much represent this history as present its effects on the world of movies. Like a classic horror film, we get the reaction shot but never see the monster.

The two cinematic transformations that react this history are Italian neo-realism and the French new wave. The first gives us situations that cannot be reacted to, that remain too disparate, too excessive for any determinate action. (Bicycle Thief as a testament to the impossibility of action). While the second, the new wave, and specifically Godard, demonstrates what has come to fill this space, short circuiting the relationship between situation and action: clichés. “They are these floating images, these anonymous clichés, which circulate in the external world, but which also penetrate each one of us and constitutes this internal world, so that everyone possesses only psychic clichés by which he thinks and feels, is thought and is felt, being himself a cliché among the others in the world which surrounds him.” These clichés are in the citations of genres, the dance sequences, actions that are disconnected and disparate.

For Deleuze these two transformations in film represent a shift in film itself, from the movement image to the time image, but we could also see this as a continuation and exasperation of the question as to what it means to act in the modern world. There is no longer a situation, a “west” that can be defended or even a “city” whose story can be told, that can coordinate action. In its place we have the clichés of film and popular culture. As Deleuze writes, “…it is a civilization of the cliché where all the powers have an interest in hiding images from us, not necessarily in hiding the same thing from us, but in hiding something in the image.” These clichés come from film, from precisely the films of the movement image (SAS’ and ASA) that Deleuze argues the soul of cinema has passed by, to move into new directions. To act today means to not only reconnect action with the situation, which requires some kind of cognitive map of the situation, but to recognize that the clichés must be mapped as well, as the form part of both the world and any possible action on the world.
Deleuze’s remarks in Cinema 2 regarding political cinema makes some interesting remarks about the colonization of life by film. However, a thorough account of the role of cinema must go beyond the cliché’s of popular culture to a political economy of the image. As Jonathan Beller has argued cinema has to be placed within a general political economy of attention. The movies are nothing other than an apparatus of capture of attention, that has now past through the multiplicity of screens that make up social life. “[Cinema] realizes capitalist tendencies toward the extension of the work day (via entertainment, email) the deterritorialization of the factory (through cottage industry, TV) the marketing of attention (to advertisers), the building of media pathways (formerly roads) and the retooling of subjects.”
I do not have a conclusion for this, but given the two figures I have focused on here, Vertov and Godard, it seems to me that the task for contemporary cinema would be to combine Vertov’s project to map social relations with a post-Godardian awareness that such a map must included the clichés are internal to those relations.  It is not enough to film the audience entering the theater, as Vertov did, but also the movie entering the audience, as the image enters thought and desire. Moreover, it seems to me that political action today will take place not in spite of the clichés of cinema, in some kind of attention to a real world exisiting outside of images, but through them.
Posted by unemployed negativity at 9:22 AM