Between Genre and Generic: The Book of Eli and the Post-Apocalyptic Film

The Road Warrior and Blade Runner were both released (at least in the US) in nineteen eighty-two. Neither were incredibly successful films, at least initially, but both have had a huge impact on the general social imagination. Mike Davis has labeled Blade Runner Los Angeles “official nightmare,” noting the way its polygot distopia haunts some of the most reactionary projects in LA. Beyond that one would be hard pressed to find a vision of the future in contemporary film that didn’t borrow from its rain slicked, smog choked skyscrapers (even if they were mostly borrowed from Metropolis and other films). The Road Warrior (Mad Max 2 to the rest of the world) has left even more of an indelible mark on the popular imaginary. It has pretty much invented the genre of the post-apocalyptic action movie, and its imagery makes appearances in everything from Simpson’s episodes to a Tupac video. This has gotten to the point where movies can be accurately described as “The Road Warrior at sea,” as in the case of Waterworld, which substitutes jet-skis for motorcycles and a super-charged catamaran for the last of the V-8 Interceptors. We have all more or less unconsciously accepted the fact that the future will either be one of rain soaked neon or a desert of mohawked motorcycle gangs.

The last entry in this long list of post-apocalyptic films is the Hughes brother’s The Book of Eli. The film concerns the quest of a lone man across the post-apocalyptic wasteland, Eli, played by Denzel Washington, to deliver a book to the west, dispatching anyone who gets in his way with sword and shotgun. The book turns out to be, quite predictably, the King James Bible. When I first heard of this film I had hoped that it would borrow a page from Walter Miller’s A Canticle for Leibowitz, in which the sacred and treasured text turns out to be a rather mundane manual of electrical engineering. The conceit of that book is that after the apocalypse, in which much of mankind’s knowledge was destroyed, everyday knowledge, the knowledge of a textbook or midlevel engineer, would be exponentially more valuable than it is today.

At the level of aesthetics the film lazily borrows from The Road Warrior, but it avoids both the sartorial excesses of the latter film (in other words, no mohawks) and any real attempt to give a consistent rationale for clothes and weapons. The people generally dress in post-grunge style that wouldn’t be out of place on the street today: I swear that a woman wearing the same plaid dress as the female protagonist, Solar (played by a miscast Mila Kunis) once made me a latte. Apparently, it is a society without the ability to fabricate soap, but with the ability to manufacture bullets. Bullets in a post-apocalyptic film always strike me as off, perhaps indicating how much I am influenced by The Road Warrior, but not as much as the use of an ipod, which, given that the film takes place thirty years after the collapse of society, seems like product placement combined with a cruel joke.

At the level of plot much has been made of the quest, guided by faith, to bring a Bible across the country to the people who could restore it to its proper place. This is supposedly one of those movies for real Americans in the heartland, a brief interruption in the steady stream of pinko-communist films that Hollywood churns out. The actual situation of the Bible is a little more complex than that, however. First, we have the character of Carnegie, played by Gary Oldman (it is an unwritten rule of Hollywood that an actor who begins his career with interesting performances will end it chewing up the scenery as the villain in various blockbusters) who knows the location of a water spring, and uses this knowledge to run a small town. Carnegie has read his Machiavelli, in the film he is shown reading a biography of Mussolini, and thus he knows that,“Only ecclesiastical rulers have states, but no need to defend them; subjects, but no need to govern them.” For him the Bible, possibly the last remaining Bible, is a source of power, making it possible to expand beyond what he can command with guns and a armored short bus. Since the events of the film take place thirty years after the apocalyptic war, and the destruction of civilization, most of the people who would remember the Bible are dead. The power of the Bible is not based on its immense hegemonic power as a common point of reference, as it was for Machiavelli, but on its sheer force as an aesthetic object, “the power of its words” as it is said in the film. This idea of the Bible as something that would have force ex nihilo seems a bit strained to me. Or, more to the point, it overlooks one of the most interesting elements of the post-apocalyptic narrative: the cultural bricolage of a society after some cataclysmic destruction of society, the way in which bits and fragments of the old culture are reassembled and given new meaning. (For example: Timothy Truman’s Scout comic books in which there is a new religion based on a combination of the Bible and the Lord of the Rings.) The utopian dimension of post-apocalyptic films lies in exactly this reinvention of the remnants of the old world (something that the Talking Heads understood): mundane objects take on new meanings, shoulder pads become acceptable everyday wear. Post-apocalyptic films are often about the revenge of use value, understood as myriad of acceptable uses, against the imperialism of exchange value. To return to the chain of thoughts begun above regarding the status of religion in the film, the film tries to present a liberal critique of religion, which attempts to differentiate its true core from its evil misuse, in these two figures of religion: the main of faith and the cynical exploiter of religion. Ultimately, the meaning of the Bible becomes more ambiguous, as I discuss below.

What is perhaps a little more interesting is that the film is in some ways a film about literacy. Franco Berardi has coined the term “post-alpha generation” to refer to the current generation, to those who have learned more words from machines than from their parents. This idea of a post literate generation, of a fundamental shift from reading, at least engaged reading of anything more than one hundred and forty characters, shows up in multiple places, from the works of Bernard Stiegler to the pages of the New York Times. The film stages this generational gap by inverting it: it is not the conflict between an older literate generation and a younger, post literate generation, raised on instant messaging and YouTube clips, but between an older generation that can read and a younger one that cannot. In this way the film becomes a strange staging of a generation in cultural decline (and aging). One of the best (but still botched) scenes in the films shows an isolated farmhouse where an elderly couple is holed-up against the rampaging gangs of the post-apocalyptic wasteland. At one point they put on an old hand crank turntable to play a record: one expects to hear some song that would be appropriate to a hand cranked turn table only to hear Anita Ward sing “Ring My Bell.” The incongruity makes sense, given that the movie takes place at least thirty years in the future, the old couple are us, the film’s audience. The film asks its generation X audience (who else even remembers the Hughes brothers) to contemplate their own decline and obsolescence. As much as it is a film about a kind of cultural decline, however, it is also a film of the advantages of the “alpha” generation, of the skills of reading and memory against those who live in the perpetual present of survival.

Now back to that Bible: Eli eventually makes it west, to Alcatraz prison in San Francisco Bay, where a small group of people have dedicated themselves to salving the cultural treasures of the old world. One of the final scenes of the film details the reprinting of the Bible, showing with loving detail layout of the typeset and the production of pages. This Bible, with the words “Alcatraz Press” on its spine, is then shelved with the Torah and Koran (either the 200s in the Dewey Decimal system or BL in the Library of Congress system). This could be seen as the ultimate message of tolerance, undermining the film’s vaguely Christian theme of faith guiding a man through the desert. However, I prefer to see this last scene, with all of these great books in a prison differently. Religion is referenced in the film as a source of the war and conflict, and placing the name of a prison on the spine of these hallowed tomes seems to send a different message than one of faith of tolerance. As Marx wrote, "The Tradition of all dead generations weighs like a nightmare on the brains of the living." 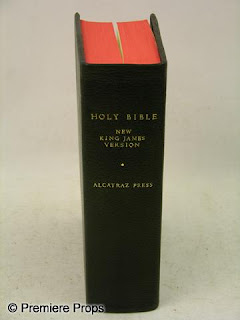 These last scenes of the printing of the Bible are juxtaposed with shots of the Solara, Eli's companion, leaving the prison of cultural patrimony to return to the desert, listening to an ipod. Perhaps this last image invokes a different idea of the Bible, not faith but exodus.
Posted by unemployed negativity at 10:37 PM

we should start an forum for the endless parade of bad post-apocalypse movies from the 70s/80s.

But yes, these are wonderful points and thank you for making them.

Have you seen The Road? The film (not the book) is kind of like Stein's "A rose is a rose is a rose": a genre-convention reset. If that's so, then Book of Eli is the first post-Road post-apocalyptic film... so it's got that going for it.

Yes, I have seen _The Road_. I was going to include some references to it in the piece, but it was getting too long as it was. What struck me is that they are oddly similar films despite their differences, differences that can best be described by the old classification of A and B movie. If The Road worked, if it truly captured the power of the book, I think that it would have interrupted the action conventions of the post-apocalyptic film, but I think it descended into them instead.

Fascinated by your final comments about the name of a prison appearing on the spines of various religious texts - can you expand on what you think the significance of this is? Thanks!

The "Alcatraz Press" stamp suggests a very different interpretation of the film than its overt message. Rather than see the film as saving religion, the word, from the rulers who would exploit it, it suggests that perhaps the religious traditions of the past are something of a prison. Better to strike out anew across the desert than retain the old words.