Workers without Work: Vonnegut's Player Piano and the Fragment on Machines 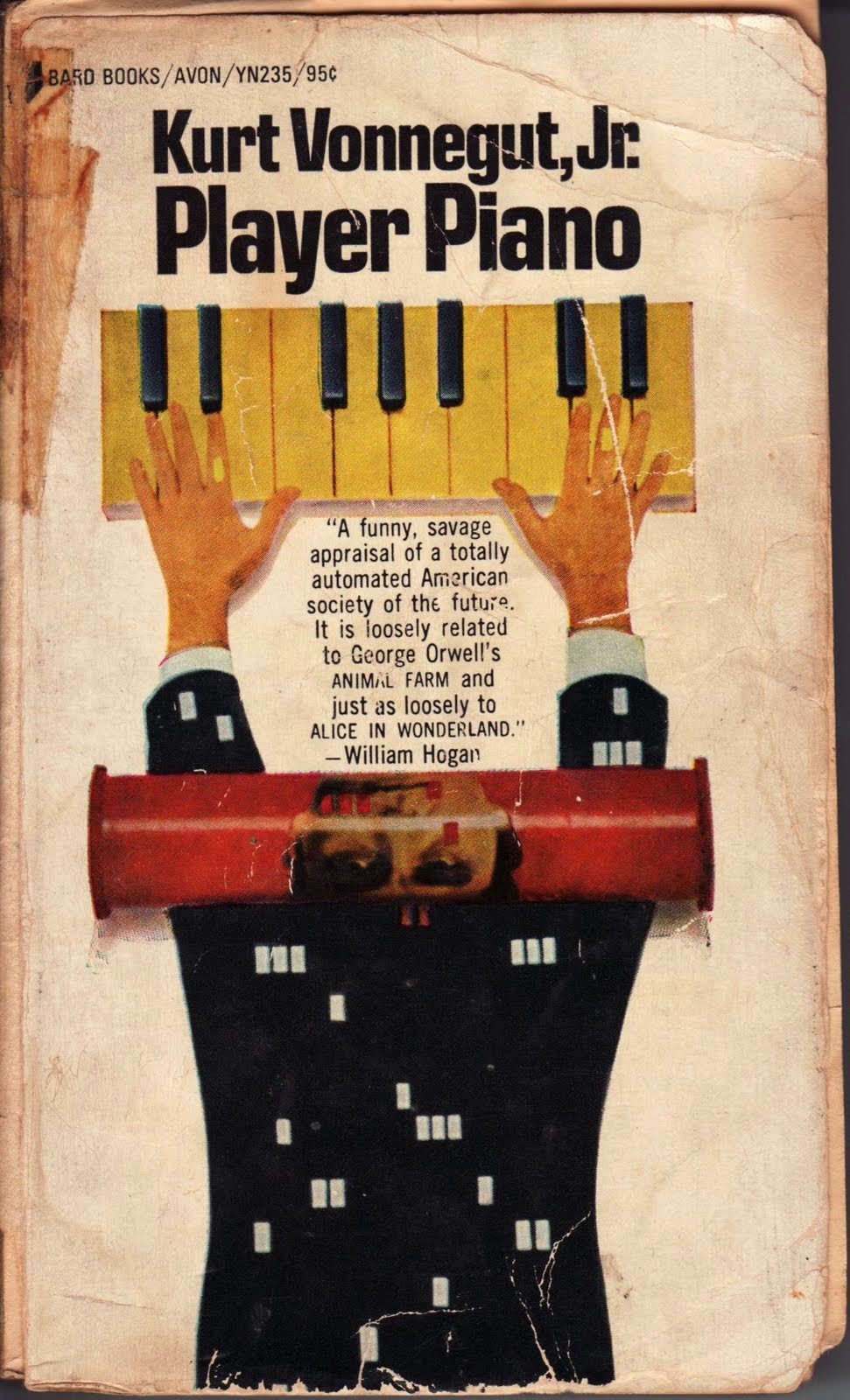 In a great little text on the "Fragment on Machines" Paolo Virno makes a comparison between Marx's text and the versus of scripture cited by heroes in Westerns. As Virno states, these scripture verses were cited in such a way that they always seemed appropriate, their meaning shifting with every context. (A more contemporary example of this situational hermeneutic can be found in Pulp Fiction in the scene in which Jules reconsiders his particular scriptural fragment.) As Virno argues the "Fragment on Machines" has been used to develop various theoretical positions, from a critique of the supposed neutrality of scientific knowledge, to the "end of work," only to become, through Virno's work and others, a foundational text in formulating the "general intellect" as a productive force and basis for a new collective subjectivity.


As something of a variant of Virno's method of reading, I would like to suggest that it can be extend beyond Marx's fragment. The general themes of Marx's fragment, specifically that of the displacement of work by scientific knowledge, are a recurring theme in the history of thought. Even a cursory examination of the history of philosophy shows that this theme is older and more persistent than it first seems. The fantasy of self moving tools, of Lyres and shuttles that move on their own accord, appears as early as Aristotle who writes, "For if each tool could perform its task on command or by anticipating instructions…a master craftsman would not need assistants, and masters would not need slaves." Aristotle's point is to argue that such an end to hierarchy could never happen, that servitude is an internal fact of humanity, and could imagine total automation less than he could grasp the labor theory of value. Despite this the idea of an end of work has reappeared throughout the history of thought, intensifying with the development of machinery. The idea of an "end of work" has had both utopian and dystopian dimensions, appearing as both liberation from toil and loss of meaning.


Vonnegut's Player Piano offers a remarkable literary version of Marx's "Fragment," so much so that it can be treated as a possible reading of Marx's text (even if there is no evidence to this fact). The novel, Vonnegut's first was written in nineteen fifty-two, and it is perhaps the closest thing he ever came to writing something like classical hard science fiction. (While Sirens of Titan is a better book in many respects, it always struck me as meta-science fiction, in which the tropes and conventions of scifi, martian armies, mind control, etc., are played with.) The novel envisions a fully automated society under the constraints of Taylorism. The basic idea is that the skills, knowledge, and movements of workers are recorded by engineers onto punchcards. The punchcards then become the basis of mechanized replacements. As Adam Smith argued mechanization follows the division of labor; it is only once labor has been divided, broken into small movements, that it becomes possible to mechanize it. In Vonnegut's novel this leads to mass displacement of workers from production and a planned economy. The engineers and technocrats have taken charge. The displaced workers, those who fail to demonstrate enough intelligence to be engineers, end up either as part of the massive occupying army of the US or in a civil job program building roads and bridges. Oddly it is a society of both full employment and generalized unemployment. Everyone has a job, sufficient access to shelter, health care, and consumer goods, but very few actually produce anything. The militarized and civilian jobs programs are less Keynesian stimulus than busy work.

While the Taylorist punch card vision of a future dates the book as the product of the fifties, Vonnegut does manage to make a few observations that anticipate a rise of a service economy. The only jobs that are not standardized, not subject to mechanization, are those of barbers and bartenders. This is not because what they do cannot be divided, duplicated, and mechanized, but because of the service, the emotional labor performed. As Vonnegut details the fate of a fully automated bar.

"The first day had been a sensation, with a waiting line extending blocks. Within a week of the opening, curiosity had been satisfied, and it was a boom day when five customers stopped in. Then this place had opened up almost next door, with a dust-and-germ trap of a Victorian bar, bad light, poor ventilation, and an unsanitary, inefficient, and probably dishonest bartender. It was an immediate and unflagging success."

It is thus possible to read Vonnegut's novel as a description of the service economy, of the rise of emotional labor, from the perspective of Fordism. There is the vague recognition that people do more in work than just produce things, and that people buy something more than food, clothing, or shelter, but it is marginal--imagined through the "pores of the old society" as it were. It is also worth noting that Vonnegut focuses on two male examples of mid-century emotional labor, exceptions to the general feminization of emotional labor.

What perhaps most dates Vonnegut's novel, or makes it an interesting text to juxtapose to Marx, and to the various readings of "The Fragment on Machines," is its anthropological dimension (one colored by a certain idea of masculinity as well). The full automation of work is not considered a problem from an economic perspective, although there are references to state planned capitalism, but a problem of human meaning. The millions given busy work, provided by the state, have lost their sense of purpose. As a priest explains to one of the engineers, "Now, you people have engineered them out of their part in the economy, in the market place, and they're finding out--most of them--that what's left is just about zero. A good bit short of enough, anyway."When the revolt comes it is not a revolt against the pointless busy work of civic services, for a life without work, but against the machine. It is a revolution for the return of meaningful work.

Thus to juxtapose with Aristotle, we find in Vonnegut another limitation of the imagination. Where Aristotle could not imagine machines that could guide themselves and thus saw servitude as a universal condition, Vonnegut cannot imagine a life without work thus seeing work itself as universal. Of course Aristotle limitations are understandable, total mechanization could only be magic in the fourth century BC, but Vonnegut's limitations are all the more persistent despite being surpassable. A life without work is still for us just as unimaginable even as the machines that would replace us are no longer run by punchcards. Reading Vonnegut today, with or alongside "The Fragment on Machines," suggests that the idea of work as necessary to human life persists long after its technological rationalization. Or, put differently, what would it take to read Player Piano as a utopia?
Posted by unemployed negativity at 3:49 PM

Thanks for this, you are right the stuff on standardized testing is interesting.

Finally finished reading it. Thanks for tipping me off to this. I can see where you're coming from with work as an ideological force. I think part of this comes from just being a melodramatic satire, and only maybe some of it is coming from some misguided celebration of work. At least, that's not the last thing to say about the struggle with the machines.

The recurring topic of sabotage is interesting, since as an insurrectionist strategy in American class struggle sabotage was more about the withdrawal of human efficiency from labor processes people found themselves in a position to control. This position of power is what automation subverts when it replaces labor without replacing bourgeois political economy. In a way, you could read the whole thing as an uncanny cautionary tale for techno-utopians about the dangers of technocratic approaches to the abolition of work.