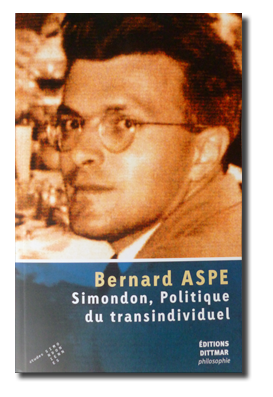 I am going to refrain from beginning this review by pointing out the similarities between Aspe's Simondon, Politique du transindividuel and the manuscript I am currently finishing. Suffice to say I am glad that this book was published towards the end of working on the book, when the differences between my perspective and his can only refine the conclusion and revisions, and not at the beginning of conceiving of the project, when its very existence would put the whole thing into jeopardy. Reading the book can thus be considered an example of the standard practice of transindividuation--the simultaneous constitution of a group of people interested in the same sets of questions and thinkers and of a unique perspective on those questions.
Aspe's book is interestingly situated between the revival of interest in Simondon, on the one hand, and the more general set of investigations into a politics of subjectivity, or subjectivation, on the other. As Aspe's book indicates the idea that politics consists of the constitution of subjectivity is a perspective that includes such a diverse group of thinkers as Badiou, Rancière, Lazarus, Negri, and E.P. Thompson, all of which are discussed. The central question of this book is to examine what extent Simondon's (largely apolitical) ontology of individuation, or ontogenesis, adds to politics understood as the production of subjectivity, and to what extent the politics of subjectivity can contribute to, or complete, Simondon's concept of the transindividual. These two separate questions structure the book, which is divided into a first half on individuation and ontology and a second half on the relation between transindividuality and political subjectivation.

The first half considers Simondon's work, constructing its intervention in the terms of individuation and ontology. Aspe spends time contrasting Simondon's conception of preindividual and individuation from other notable dualisms, such as Heidegger's Being/beings and Deleuze's distinction between the virtual and the actual. Aspe also engages with several readers of Simondon, most notably Stiegler and Stengers. With respect to the former, Aspe raises the problem of Stiegler's technological determinism. Stiegler overwhelming identifies the preindividual with the tertiary memories inherited through tools, signs, and images, and increasingly assigns technological the driving role in shaping and transforming the basic conditions of such memories. The printing press, cinema, and the rise of digital technology are all events in the history of transindividuation, revolutions in the tertiary retentions that define our inherited memory. Aspe argues that Stiegler too readily identifies the transindividual with the technological, obscuring not only Simondon's thought on culture but the way in which the transindividual is first and foremost a philosophy of relations, not a philosophy of technology.

While the first part offers a useful exegesis on difficult thinker, on par with Muriel Combes' book, it is the second half that is really of interest. If individuation is Simondon's central ontological investigation, the central question of much contemporary political thought is that not of individuation but subjectivation. Individuation is a process that can be described through an ontology, but subjectivation demands an ethical or aesthetic component--it is inseparable from an active and constructive dimension. Following Simondon's assertion that individuation can only be practiced, not known. Subjectivation, like individuation, proceeds from problems, from tensions and differences, but it takes place in and through an act, through a division. Materialism is the presupposition that is not a premise and the act that is not an act of thought.

In this case, however, one divides into two. As Aspe's indicates, there are roughly two different approaches to the politics of subjectivation in contemporary philosophy. In the the first approach, exemplified by Sylvan Lazarus (but also including Alain Badiou and Jacques Rancière), subjectivation is defined as a break from any object, or objective determinations. It is an entirely internal break, defined without any relation to objective determinations or conditions. In contrast to this the post-autonomist tradition generally defines subjectivation through the labor process and its transformation. As labor becomes more cooperative, more social, taking on the conditions of its own organization it becomes the precursor to revolution. Aspe argues that this is not as simple economic determinism since the perspective of Negri and others hinges on the concept of living labor as both antagonistic to capitalist command and integral to capitalist value. As Aspe writes, "The working class is the support of a irreducible division of he community: it is determined politically (as non-capital) before being determined "economically" (as part of the process of capital). Or again: political composition is not the effect of technical composition; subjectively political composition is primary."

This is admittedly a rather shallow contrast on my part, but it is useful for precisely the way in which it recasts some of the dominant theoretical perspectives in light of the old divide between determinism and voluntarism. Its usefulness is its reductive tendency to make it appear as if there is nothing new under the sun. If new ontologies and new concepts of social relations are necessary, are something other than the machine of academia needing to produce new perspectives, newly "hot" authors, and new vocabularies, then they should be able to displace old divisions. The ability of transindividuality to displace the old binary of the individual or society has been discussed at length by Balibar and others. Aspe's book suggests that it should also be able to displace the binary between economic determinism and political voluntarism.

Here a return to Simondon is perhaps necessary. Simondon stresses the metastable conditions of any individuation, any collectivity. The conditions that produce individuation (or the conditions for subjectivation) are not causes that operate in a linear manner but tensions and unstable relations. As Aspe writes, "A political subjectivation is constructed from the amplification of fragments and relations of the previously disparate collective."What Aspe suggests is that Simondon's philosophy of individuation offers a way out of the opposition between transformative event and imminent teleology, a way to think transformation as something based on the tensions animating the present.

Aspe's remarks in this direction are suggestive, but they also suggest that there is work to be done. So I guess it is back to revising that manuscript for publication.

Posted by unemployed negativity at 8:46 AM