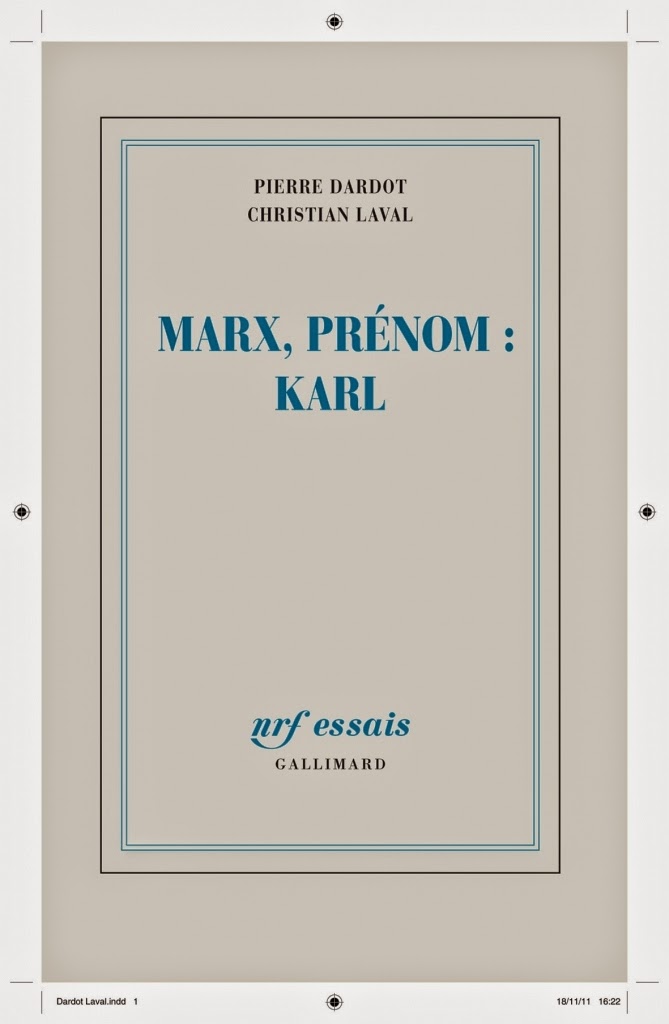 Pierre Dardot and Christian Laval's Marx, Prénom: Karl is yet another attempt to take stock of the work of Marx. As the title suggests, this book is an attempt to get beyond the myth of Marx, the Grandeur of Marx; t it does so not through the biography of the man named Karl, but through the question of Marx's relations to its sources.  (The title is a bid odd, and I can't help but think of James Bond every time I glance at it."Marx, Karl Marx")

If this massive book has one dominant theme it is that of presuppositions. Presuppositions are taken here in multiple senses. First, there is the question of Marx's precursors, Hegel, and of course Feuerbach, those are the ones that everyone knows so well. Dardot and Laval add to this well known list the works of Saint-Simon, Hess, and Proudhon as well as events such as the Paris Commune, situating Marx within a revolutionary milieu. Rather than see in Marx a break with all hitherto existing philosophy, or even his own early conceptions, Dardot and Laval read a Marx that is constantly reading and rewriting texts; or, as they put it, a "Marx machine" that performs a series of critical interventions and transformations on a set of texts--transforming its presuppositions

Presuppositions is not just precursors, the anxiety of influence, but the presuppositions of thinking and practice. It is the transition from the former to the latter that is central to Dardot and Laval's reading of Marx, as they interrogate the shift from philosophical presuppositions, the starting point of thought, to real conditions, the material relations introduced in The German Ideology. Of course the most important question of preconditions concerns capital itself. Capital posits its presuppositions, transforming commodity production into the immense accumulation of commodities, and money into capital. However, this positing of presuppositions cannot be an unbroken circle in which the conditions are unchanged. Capital is transformed in its very reproduction. As Dardot and Laval, argue capital is always "doubly historicized," situated between its conditions, primitive accumulation, money, simple commodity production, etc. and its results, real subsumption and the intensive and extensive expansion of capital. Reading capital historically is a matter of understanding the difference between conditions and results, and the work of transformation that passes between them. The central question then is how does this non-identity of production and reproduction lead to the ultimate transformation, that of the constitution of something that would come after capitalism.

That is the ultimate question, but it is not one that Dardot and Laval offer an answer to. The merit of Dardot and Laval's book is not in offering some kind of ultimate new foundation for Marx, or in demonstrating that Marx was a new foundation. It is a text which confronts the uneven and incomplete process of transformation by which preconditions become results. It thus stands as a corrective not just to Althusser's assertion of breaks, but also to contemporary theoretical trends which in one way or another argue for a simple transformation of preconditions into results. Capital posits the preconditions of its overcoming in the various ideas of the multitude, accelerationism, ecological destruction, and the misery of the excluded. We are living in a time of competing eschatologies. If Dardot and Laval's book can be understood to be contemporary, a Marx for our times, it is because it dispenses with such teleologies and eschatologies. There is neither a new world being born nor is this one being totally destroyed. This is not so much an argument that all pronouncements are false, bad things are surely coming, but it is a matter of paying attention to what all apocalypses overlook. All there is the tension between reproduction and production, between repetition and transformation, taking place in different ways at each and every moment.

Given Dardot and Laval's attempt to break with breaks, to posit a Marx that is all the more engaging by never quite breaking, by reworking the conditions, ends up having an unlikely point of overlap with Pierre Macherey's Études de philosophe Français: De Sieyes à Barni. (Or least it occurred to me reading one after the other).  As is often the case with Macherey’s studies on figures in the history of philosophy, the essays collected in this book can be read in terms of an exoteric and esoteric meaning. From the outside, to the reader in the history of ideas, they cover some of the major philosophical, political, and cultural shifts in France from the revolution to the Third Republic. To reader more attuned to Macherey’s role within Marxism, there is a different itinerary, one which attempts to chart out the role of not just French socialism in the formation of Marx’s thought, as Lenin argued, but French politics in general in the formation of Marxism. Two essays, “Naissance de l’Idéologie” and “Le processus de péjoratisation de l’idéologie, de Napoléon au Jeune Marx,” reconstruct the particular history of the concept of ideology from a positive science, one that could even replace philosophy, to a political pejorative. In doing so Macherey not only covers a crucial piece of intellectual history for those interested in Marx, but he situates the positive science of ideology against returns to the science of ideas in such critical theories as “noology.” In a similar manner Macherey develops a critical genealogy of the concept of social relations, charting its development in the thought of Bonald, Saint-Simon, and Guizot. Macherey moves the idea of the French origins of Marx’s thought beyond the slogan to an investigation of the French history of such concepts as “ideology” and “social relations.” Macherey's readings look forward and back, charting new possibilities through incomplete transformations.

Dardot, Laval, and Macherey all offer a reading of Marx focused less on breaks and divisions than transformations and productions. It is materialist in the sense that the raw material can never be entirely transformed, or dispensed with, but must be reworked. The question remains, however, if such a reading can be revolutionary; does an attentiveness to the incomplete transformation of intellectual production bring us closer to grasping the incomplete transformations of history itself, and with it the break that really matters, the one that separates from the past of capital rather than the past of Capital.

Posted by unemployed negativity at 10:46 PM