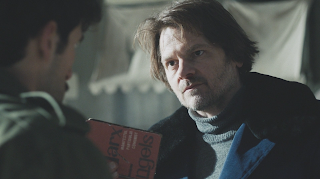 Has Slavoj Zizek written about Comrade Detective yet? It seems to be the perfect show for him, not just for its setting behind the iron curtain, but its central premise is that of a "subject supposed to believe." Comrade Detective is a show streaming on Amazon. Its central premise, or gag, is that it is ersatz Soviet Bloc propaganda. The show is made to look as if it is a Romanian detective show from the nineteen-eighties; it is shot with Romanian actors (but modern production values) the dialogue is then dubbed by actors such as Channing Tatum and Joseph Gordon-Levitt.

Where things get a little more interesting, and what justifies the Zizek line above, is that the show is less some attempt to duplicate soviet block culture than an attempt to reverse engineer it. The show is a funhouse mirror of propaganda. The characters revel in the imagined propaganda of Romania, ridiculing religion, western decadence and the cruelty of capitalism, but this is very much cold war propaganda imagined from the other side, imagined from our own history. As one of the show's creators states.

“We grew up in the ‘80s, watching Red Dawn and Rocky IV and all these films—not really knowing as kids that we were essentially watching propaganda.” Tatum recalls a youth where every movie “had a Russian bad guy.”Showing the reverse, though, is both “hilarious and really poignant right now.”

Things get a little warped in this play of mirrors, and at times the show seems more interested in the image than its reflection. If the show satires anything, it is closer to Lethal Weapon, an unlikely pairing of a bad boy detective and a family man, a haggard police chief, a beautiful woman, etc. When one of the detectives tells a roulette operator "I always bet on red," it is unclear if the line is meant as a jab at heavy handed communist propaganda or a joke about Wesley Snipes' line from Passenger 57. Much of the jokes about western decadence and greed are also jokes about eighties culture in general. It is not clear if the humor of smuggled Jordache jeans and Thriller jackets is supposed to be a joke about iron curtain scarcity or eighties excess.

The supposed poignancy of this reversal seems to be oddly thought out. The show's creators and Levitt seem to think that it functions as a kind of object lesson in propaganda, as something poignant in the age of #MAGA. The lesson necessarily passes through the other scene, through the others' propaganda. We can always see the other's propaganda, their ideology, and by and large, ideology is something that exists only for others. However, there is nothing to suggest that seeing ideology in the other will lead to some kind of self awareness, in fact the opposite is almost always the case. The very concept of propaganda suggests that it is always the other that is duped. This has only intensified in the age of internet trolls when belief, believing anything, is seen as akin to being duped.

The propaganda in reverse has its moments though. There are some great (and not so great) jokes in the film. One of my favorite is a moment of dialogue between one of the Romanian detectives and an American Ambassador. He asks "Why are you Americans so cut throat?" and she responds " You try living without a safety net." There are enough exchanges like that to keep me watching all six episodes. As much as the gag of having a killer wear a Reagan mask wears thin, there is [SPOILER ALERT] something to be said for a villain who gets his hands blown off after making a speech praising Adam Smith's invisible hand. 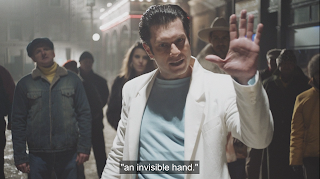 Ultimately the show is enjoyable in almost the opposite way that it seems to be intended. Rather than merging "communist" propaganda with eighties culture, in which the two jokes compound each other, combining the mockery of the eighties with that of communists, the show's best moments come in the odd combination of buddy cop camaraderie and Marxist comrades. The two detectives are less the cynical, wisecracking, brutalist that made up eighties (and early nineties) action films than two guys who believe in "being a good communist." Like The Americans there is something of an odd fascination with the idea of a true believer, of someone who believes in something other than private self interest, the subject supposed to believe.  However, given the cultural materials that the show works with it suggest a way to read eighties popular culture against the grain, maybe all of those buddy cops and ragtag groups of rebels were fantasies about solidarity after all.
Posted by unemployed negativity at 10:45 PM