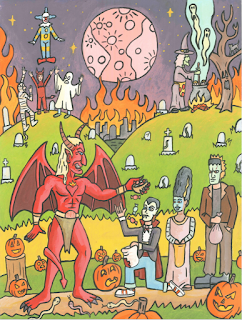 I will begin with the personal story. At some point in my awkward adolescent years when I was too old to trick or treat yet not yet old enough to do anything else on Halloween I was left with the responsibility of giving out candy. Left alone and somewhat bored I decided to make it fun. In between rings of the doorbell I gathered up an old "Creature from the Black Lagoon" mask and my "Chilling, Thrilling Sounds of the Haunted House." The record supplied atmosphere and then I would jump out from behind the door. As the night went on I became more creative, leaving a hatchet covered in ketchup in view of the door, placing an iron black cat doorstop in the window, and so on. My brother soon came home and found scaring kids to be way more fun than going door to door getting candy.


In subsequent years the ad hoc haunted house became less ad hoc and more elaborate. We covered all the windows of the house with strips of cardboard on which we hand drew lines of woodgrain to  simulate boards. We built a cemetery in the front yard. Other friends participated, jumping out of piles of leaves and behind bushes, making it yard of frights. Soon it became the sort of house people made a trip to visit, even driving back into the neighborhood after they moved away. I only wish that we had pictures.

The point of this story is not simply to reminisce or brag, but to remember what Halloween was like thirty years ago. The decorations we used for our house were either homemade, headstones made from discarded bits of concrete and large rocks and pieces of cardboard salvaged from refrigerator boxes. Everything else was bought from a weird little magic store in Cleveland Heights. The store, called Starship Earth sold masks, rubber limbs, fake blood, etc., along with magic tricks, but I suspect its real money maker were the novelty IDs it sold. The little display by the cash register advertised IDs made out to Captain James T. Kirk and other wacky options, but I imagine must people just went with the fun joke where they pretended to be twenty-one, but in a zany way. This out of the way and sketchy store was the only place we could go to find Halloween decorations. That was Halloween in the late eighties, mainly for kids and at the margins of suburban life. People might carve pumpkins if they had kids. or hang a cardboard skeleton on the door, but that was it. Halloween had to be made and not bought. I guess this is just another version of the argument that nostalgia is just a memory for a past stage of capital, for the formal rather than the real subsumption of Halloween. 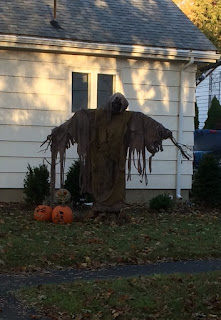 I think of this ever time I pass by the rows of animatronic skeletons at Home Depot or the display of rubber severed hands at the Dollar Store. Halloween has become mainstream. In recent years spending on Halloween has risen more than Christmas, totaling 9.1 billion this year. What interests me is why this is the case? What cause or causes has made Halloween so popular. Is it an escape from an increasingly stifling existence? A distorted allusion to the fear that increasingly permeates modern life? Nothing quite seems convincing, and yet it grows every year. Mundane and mild mannered suburbs suddenly look like a goth's apartment for one month, covered in gargoyles and gravestones. Not only is it hard to know why, it is equally hard to know what to make of it. Should we see it as kind of subversion of the official values and norms, or the ultimate victory of the commodity over the fear of death and nostalgia for childhood? I honestly do not know. If there is some modern Roland Barthes or Clifford Geertz who can explain this all, I would love to read that book.
Posted by unemployed negativity at 11:55 PM