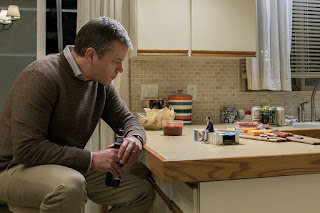 Matt Damon has the odd distinction of staring in two science fiction dystopias, one bleak action movie the other farce, that are absolutely confused on the role of work and capitalism. The first was Elysium and the most recent is Downsizing. The confusion is not just a product of the director or screenwriter's particular confusion, but is in some sense symptomatic of a more general ideological elision in which capitalism is lived but never named, or, more to the point, never named because it is lived--just like the proverbial fish in water.
Downsizing represents something of a departure for Alexander Payne whose previous films all more or less focus on a kind of middle aged, middle class, and mid-western malaise and ennui that somehow, through the sheer repetition of that word "middle," stands in metonymically for the discontent of the whole. The median encompasses the extremes. Which is not to say that those things are absent from the film. Matt Damon's Paul Safranek,  an occupational therapist for Omaha Steaks struggling to buy a new house and escape lingering student debt, would not be out of place in any of Payne's earlier films. In this case, however, it is the world, and not the character that has changed. The central premise of Downsizing, one that qualifies it, at least nominally as science fiction, is that a technology has been invented that shrinks organic cells to a fraction of their current size, making it possible to shrink people to five inches tall.

This technology is first presented as a solution to an impending ecological crisis, a crisis that is framed in terms of overpopulation not carbon emissions or overconsumption. (Overpopulation has always struck me as the most reactionary way of framing of figuring the anthropocene, not just in terms of the solutions, which always tend towards genocide but also in terms of the very formulation of the problem which is caused by humanity as a species rather than technological or economic structures.) Smaller people leave a smaller ecological footprint, creating less waste and using less resources. Participation in the "downsizing" program is voluntary, but so happens that there is a financial incentive to being small as well. Even a few middle class assets, a car and a partially paid off home, have much more buying power for the "smalls" (as the shrunken are called), translating into a mini-Mcmansion and a life of leisure. It turns out that most of the people undertake the downsizing procedure not out of an altruistic desire to save the world but out of a egocentric ideal of increasing their spending power, decreasing their size to increase their wealth. A strange literalization of Marx's formulation that in capitalism in order to have more one must be less. Oddly, this is also the film's central utopian ideal; rather than present ecological conscience and consumer desires as necessarily opposed, forcing one to choose between one or the other, one can have one's cake and eat it too (it is, after all, so very small). One can consume and "be green" provided one can be shrunk to the size on an insect.

Such a reconciliation is possible only by displacing the entire question of labor, or work, in this miniature society. Downsizing leads to more wealth only if that wealth is thought of primarily in terms of raw materials. This is depicted visually by the (relatively) giant crackers and bottles of vodka that are occasionally seen, driving home the point that one is able to do more with less. (It is worth noting that these scenes are few and far between, but they represent the only use of special effects in a film that is relatively uninterested in Incredible Shrinking Man-esque scenes of tiny humans battling rats and spiders). This only works if we think of consumer good primarily in terms of their physical existence as so much food, land, or alcohol, as use values, neglecting the labor that goes into them as commodities. No mention is made of who makes the tiny clothing, cars, and mansions that make for lilliputian life of luxury. 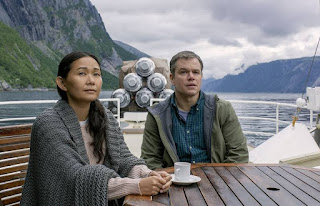 This is not to say work is entirely absent from the film. It appears primarily through Ngoc Lan Tran (Hung Chau) a Vietnamese dissident, shrunk by the government as a form of control and suppression, who smuggles herself into the US in a flat screen TV box. That the "smalls" would be incredibly vulnerable to persecution and control by full size humans, forming simultaneously an elite population living a life of leisure and a vulnerable population that could be exterminated with a garden hose is one of the many ideas the film alludes to rather than explores. Because she is without any assets whatsoever, nothing not even a car to sell in order to finance a shrunken life, she is compelled to work in order to make money to live, as she rather bluntly puts it, cleaning the homes of the nouveau-rich micro-men. Beyond her specific situation there is a reference to the fact that the smalls could become a cheap labor source for the larger world. A down on his luck Paul Safranek (Damon) also works as a call center operator for Lands End, taking orders for smalls and normal individuals alike. When it comes to exploiting ones knowledge and communication size does not matter, miniaturized individuals are the perfect compliment to a world of smaller and faster machines. Like the notion of shrinking as a tool of oppression, the idea of an exploitable immaterial labor force of cell center operators, programmers, data analysts, writers, etc. that could live on pennies a day is more invoked than explored.

Ngoc instead is cast in the role of reawakening Paul's joy of life. She is a more manic calvinist dream girl than manic pixie dream girl. She works tirelessly, not just in her waged job, that of a cleaner, but in bringing food, medicine, and care to the small and forgotten. It is this life of work and tireless service that the movie offers as an alternative to either apocalyptic ecological anxiety or consumerist hedonism. Work is effaced in the structure of the film's utopia only to be reasserted even stronger in its ideology. It is this insistence of the ethical norm of work, on work as something that gives value and meaning to a life in the face of uncertainty and doom, and not the ecological concerns, that makes the film truly contemporary.

Posted by unemployed negativity at 5:00 PM