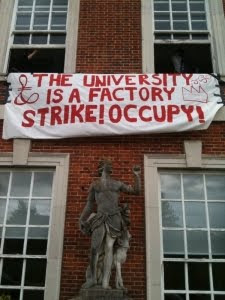 For the past week I have been preoccupied, perhaps even obsessed, with Middlesex University’s decision to close its internationally recognized program in philosophy. This is in part because I know some people affected. I have been fortunate to meet some of the faculty, graduates, and students at Middlesex, all of who have impressed me with their intelligence, passion, and generosity. More immediately, as someone who teaches philosophy, I know students, or former students, who have aspirations to attend graduate school at Middlesex. All of these people will be immediately affected by this change.

My preoccupation with this particular tragedy, and I can think of no other word, to describe it, extends beyond the immediate effects on friends, colleagues, and students. First and foremost I see the loss of Middlesex (and the center and journal that it hosts) as a loss to philosophy, specifically to the study of contemporary continental philosophy. One of the positive developments of the past ten years (such things do happen) has been the development of an immediate global context for philosophical discussion: conferences go up online as they are taking, or are at least quickly summarized in blogs and online discussions. One no longer has to wait for journals and proceedings to learn what is being thought elsewhere. Middlesex has been an important node in this network, relaying crucial discussions and conferences, and often serving as a transfer point between francophone and English debates and discussions. Its loss will thus be immediately felt. Beyond this I fear that this particular UK case, despite its idiocy and the fact that it is caught up in the specific and somewhat arcane bureaucracy of the UK university system (summarized in part here) is but a portent of a global situation. As Marx once wrote to his German, readers regarding his own analysis of a specifically British situation, the rise of the factory in the early industrial revolution, “De te fabula narratur” (the story concerns you).

The current conjuncture in terms of both its immediate crisis of capital and long term restructuring has lead to an assault on higher education. Of course the immediate crisis and long term restructuring can only be separated heuristically, only in the sense that we face both immediate cuts, cuts justified in and through their immediacy (No time to talk, to discuss, to plan, we need to cut now!) and long term transformations, as the university becomes less and less a place of reflection and research and becomes more and more of a job training center, or some supposed miraculous engine of growth. The latter has been going on for some time, and is part of both neoliberal restructuring and the changing dynamics of labor in post-fordism. The current crisis has only exasperated this tendency, creating a sense of urgency and scarcity, the idea that everything must go into fixing the economy. Thus, making the short-term crisis an alibi for the acceleration of the general transformation, for the general reduction of everything to an economic logic of competition. It is worth noting that things could have gone otherwise (and still could) the economic crisis could lead to an interrogation of precisely what counts as knowledge in these fields. Instead all we got were some vague ideas of teaching ethics at business schools.

Middlesex was not the first philosophy program cut and it will not be the last. Moreover, this trend is not just limited to philosophy, but includes classics, literature, women’s studies, and basically everything that cannot justify itself in terms of grant money and private donations. The question that we need to ask is how best to counter this tendency. How best to fight it? What actions and words can we use? As far as I can see there are three strategies.

The first is to claim that the skills taught in the humanities, in the liberal arts, critical thinking, various literacies, reading and writing, etc., are useful for the world of business. They are the cultivation of the general intellect as intellect in general: the development of flexible skills that can be applied to any situation. This strategy seems to be incredibly shortsighted, and risks losing the war to win a few battles here and there.

The second strategy is to make an appeal to tradition, to the ideals of the university as free inquiry, and citizenship. This liberal tradition has stronger tactical merits than the former strategy which accepts, but inflects, neoliberal justifications. There is something to be said for the claim that a university without a philosophy program, without languages, without literature, and so on, is not a university at all. However, these words, citizenship, liberal arts, seem to be empty in the mouths of the very people who utter them. Moreover, they risk contributing to the general division between schools that will be concerned with such lofty goals and those that will dedicate themselves to practical matters. What is so striking about the Middlesex case is how quickly the administrators in question dismissed any claim of its excellence.

Finally, there is a third strategy emerging from the sites of struggles themselves, from the takeovers in the University of California system and from the response to Middlesex (see the picture above). This strategy is to see the university not as some exception to society, as an ivory tower, but as fully a part of the social factory, of the production and reproduction of knowledge, which is to say wealth, in society. Thus, in the short term, the struggle for the fate of the university cannot be separated from the immediate question of how the crisis is paid for: the slogan “we will not pay for your crisis” encapsulates this nicely. More importantly if we are living through a knowledge economy then there is no separation between the struggle over knowledge, who gets to learn, who benefits, etc., and the general struggle for the economy, for the production and circulation of wealth. To put it briefly the contemporary university is an object lesson in the inseparability of the economic and the political. Cutting funding, increasing loans, immediately curtails curiosity, steering students towards those subjects that will supposedly guarantee an ability to pay loans back: academic freedom without resources is meaningless. The existing struggles go beyond this lesson in what Balibar calls “equaliberty” to become a crucial site for the construction of a commons, of an economy based on openness and access rather than scarcity and competition.

Clearly I am in support of the third strategy, a strategy and politics that is already underway without my meager support. It is perhaps the most difficult, the most radical, but paradoxically it is also the most practical. After all, the connections are already there.

Posted by unemployed negativity at 11:59 PM

Thanks, Jason, very thoughtful comments. At various times and for various audiences I've tried each of these approaches. It's been just a matter of rhetorical guesswork. But philosophically, you put the case for the superiority of the third strategy very well.

About the title of the post. I don't know who first said it, but I often use this saying: "you might say you're not interested in politics, but you can be damn sure politics is interested in you." I think that's pretty much what your title says too!

I see your point, and I have used the other tactics as well when addressing administrators and so on. Perhaps a distinction between tactics and strategy would be useful. I just think that the third strategy offers the maximum potential to connect with other issues, other cuts and protests.

I like your line and will definitely use it.

Finally, I am going to include a link to your blog, specifically your piece about administration salaries at Middlesex. I think it is an important point, and, unfortunately, part of a larger trend of what I call the "CEO-ification of the university": inflated administrator salaries (and increase in administrators)that mirrors, albeit on a smaller scale, the fetish of the CEO as the source of wealth and innovation.

Hi Jason, I have also used a labor justice variant of the second strategy (and yes, tactics vs strategy is a good distinction here). That is to say, the Mdx admins have used the labor of the philosophers to justify the ascension of their institution to the market niche of "university," but now want to cut the people whose labor justifies that title. (There's an affective angle here too, the emotional resonance of "university" as opposed to mere trade school.) Then there's the longer term labor of all the philosophers since 1215 (Paris) who have contributed to the prestige of the term "philosophy." Of course there are lots of class politics here in the privilege of mental over manual labor ("mere" trade school, indeed!), but such are the complexities of political rhetoric, no?

I tried to add a comment to IHE artcile of John Protevi, which I am including below. It may still be posted at the IHE site, but I thought I'd share it with you and with John.

I am surprised that people have not engaged in further discussion of Protevi's article and his insightful and creative use of Read's analyses of the Middlesex situation as a reflection of the situation of knowledge and learning in contemporary societies.

Maybe it is important to reiterate the obvious points that Protevi is aiming at: Middlesex represents a site of struggle that cannot be dissociated from the transformations of knowledge and of knowledge production in our societies. We may think that neoliberalism is dead, but it is “alive” in what Middlesex University is doing, as well as in what we are all doing in our colleges and universities (assessing measurable learning outcomes, anyone?!) as well as in our various manifestations of sociality (the dominant culture, politics, media, etc.).

Neoliberal ideologies (associated with the social scientific methods of reducing, measuring, and determining) are actively engaged in changing our “ways of living” (in line with what Deleuze described as the “societies of control”) but they are functioning at the capillary levels, creating multiple dispositifs and assemblages that take away any practices and discourses that may empower subjects and provide them with means of (self)-transformation. With philosophy gone, the humanities will follow, and soon enough, we will be teaching “skills” to serve functions and to perform duties--all in the name of “success” and “achievement.”

We need to see that the discourses and practices associated with over-valuing the determinate and the tangible (measurements and assessment, streamlining and re-organizing, increasing productivity and efficiency, etc) is not a return of “Taylorism” but is a neoliberal tendency to oppose and eradicate any resistance to the actual (deluded but not impossible) “aim” of contemporary capitalism: the complete control over time, work, and life and the domination of forms of production of subjectivities--in ways to circumscribe forms of self-subjectivization and/or other means (counter-discourses or counter-practices) of economic, social and/or political transformation.

These sets of forces, strategies, and tactics are re-assembling our world (and our ontologies and epistemologies) in ways where “we” no longer dream of freedom, equality, or autonomy; in a world where even education and ways of knowing reproduce positions and decisions based on statistical, numerical, or pseudo-economic constructs (reiterated as values) what is to happen to “us”???

Look in the mirror and you will see Middlesex... Everywhere, a Middlesex is happening, and “life goes on”...