Another Day in the Future: Philip K. Dick and the Philosophy of Science Fiction 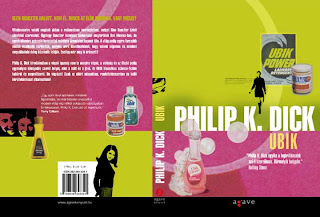 The recent news that Michel Gondry planned to make a film based on Ubik convinced me to look at this again. It is an old piece, and one that I wrote for an undergraduate audience. I can’t really say that my thinking on the matter has changed much, however, in part because I have not have had time to revisit it, so I thought that I would post it.

There could be another perspective. In my research, I consider science fiction as a way to problematize social change and that's why it often has a political dimension.
See, in French, "Ce que la science-fiction pourrait apporter à la pensée politique", Raisons politiques, n° 40, novembre 2010, http://www.cairn.info/revue-raisons-politiques-2010-4-page-97.htm and, for a case study, see "Artificial intelligences and political organization: an exploration based on the science fiction work of Iain M. Banks", Technology in Society, Volume 34, Issue 1, 2012, http://www.sciencedirect.com/science/article/pii/S0160791X11000728

Thanks for your comments, and references. I will check them out.