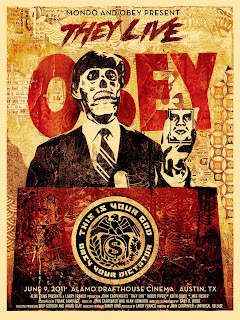 Jonathan Lethem’s little book on They Live (part of a relatively new series on films by Soft Skull Press, a cinematic equivalent of Continuum’s 33-1/3 books on records) offers two beginnings. The first presents the film as a dream, focusing on the things that everyone will remember even years after seeing the film, the glasses, the decoded billboards, and of course this:

The second, which sets up the books method, chapters broken down to a minute by minute count of the film, a sort of print commentary track, states the following.

“A Netflix copy of They Live plays behind these words as I type. Not on a television screen in the same room, but on the computer screen, on which my document also appears. Thanks to contemporary technology—not just DVDs, but YouTube excerpts, available via the wireless signal in the café where I write sometimes, if I’ve forgotten to bring the disk—I’m Pauline Kael’s ultimate opposite here: I’ve watched the entirety of my subject film a dozen times at least, and many individual scenes countless times more (Kael used to brag of seeing each film only once). This situation isn’t normal in the history of film studies (unless it’s “the new normal,” which it probably is): even if Robin Wood or Tag Gallagher resorted to owning a 16-millimeter print or a VHS tape of their Hitchcock or Rossellini subjects, they’d have worn holes in those artifacts and perhaps also destroyed their projection devices with the kind of obsessive close viewing I can do simply at the click of a cursor.”

Lethem book is engaging, it is no Fortress of Solitude but it is perhaps more enjoyable then Chronic City. When I finish the book I might say something about its particular method of film criticism, caught somewhere between the pop and academic, but I am particular struck by his remark about technology and memory.

The great works of film criticism were written before VHS, DVD. and Youtube, they were in some sense works of memory. As such they often make mistakes, remembering a scene wrong. The description of Umberto D that opens the second volume of Deleuze's Cinema lingers longer than in the actual film. Deleuze's entire understanding of the passivity of the scene are as much about its impression on him than the actual fim.One could say that to write about films before its technological reproduction was always to write about one's memory of films: the way in which our memory reconstructs its own version of films, dropping certain scenes, extending others. We all swede films. Lethem is right that this has changed with the creation of home video, DVDs, and digital reproduction. Memory has been replaced with the actual thing. I have written about movies and TV, playing the scenes on the same computer that I was writing on--one window showing the film and the other the text.

However, Lethem’s point goes beyond writing about film to touch on memory in the age of its technological reproduction. These youtube clips are not just useful for writing about films, but are often used to recall memories, settle arguments about critical scenes or dialogue etc. To follow Lethem’s analogy with the hazy recollection of dreams one could say that the science fiction fantasy of a machine that records our dreams might never come true, but with youtube we do not need it. Its film clips, old commercials, videos are the stuff of memory freed from the hazy gray confines of our heads. Our memory, at least our pop-cultural memory, is no longer inside, half forgotten/half imagined, but outside in clips, Gifs, and even memes.

Of course the question remains, and this is the question that Jonathan Beller, Bernard Stiegler, and others are working on is what this transformation, this ability to recall everything immediately, looks like once we put the glasses on, once we move past its appearance to grasp the forces and powers that underlie it.

Posted by unemployed negativity at 4:47 AM

SPOILER ALERT would have been a useful tag on this post, dr. read. No, I kid. Having put on my glasses prior to reading your post, I already knew that you were going to reveal too much about Lethem's book, which I have downloaded on my Kindle. Further complicating the intertwining of technology, memory, and the stature of reading about moving pictures. As soon as the kindle allows us to read text while watching the movie scenes of each chapter, flickering between remakes and originals, then what will memory become then, especially when Ke$ha is autotuning in the background and the TV is looping video game replays of best campaigns?

In short, I can't wait to get at Lethem's book. I wonder if they would let me write one on DAWN OF THE DEAD.

I actually did read it on a Kindle, which, as you point out, introduces a whole different set of issues about memory. Without the tactile space of a book I feel that a kindle is always in the perpetual present, it is just the page that I am reading. So there is a definite loss of memory. At the same time I was able to "underline" the book through the device and directly cut and paste the text into a document. Much is retained in the fully digital relay of mark, cut, and paste, but much is also lost.

Oh, and you should totally write the book on Dawn of the Dead.