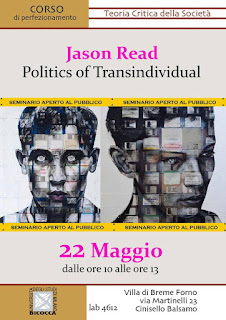 What follows is neither the presentation I gave in Milan (in the picture above), nor the one from Rome (indicated in the picture below), but a combination of both, or more importantly, of the thoughts that emerge from the questions and conversations that followed each presentation. Why would we go to conferences after all if not to have our thoughts confronted and transformed by the ideas of others?

To begin with a passage that I have cited before Balibar describes the difference between Marx and Spinoza as follows.

"It would be easy to conclude that Marx is basically unaware of the “other scene” of politics, the scene of communitarian affiliation, and therefore unaware of symbolic violence as well (although he names it or has bequeathed us with the word ideology, on of the aptest names for it); and to conclude that Spinoza, for his part, basically ignores the irreducible level of economic antagonism (doubtless because, at the economic level, where conatus can perhaps be conceived of as a “productive force,” Spinoza is basically an optimist and a utilitarian.)"

Tracing this back to Spinoza it is possible to see that this is in some sense how he reads Spinoza’s political imaginary. Focusing on the two demonstrations of Proposition 37 in Book IV of the Ethics, Balibar focuses on the two demonstrations of the proposition. The first gives us the rational basis for the state or society according to the idea that nothing is more useful to man than man. The second demonstration arrives at the same end, the constitution of community, but through the affects, specifically ambition, which compels one to make it so others love what one loves and hate which one hates. These two foundations coexist in every society just as reason and imagination coexist in every individual. As Balibar writes, ‘Sociability is therefore the unity of a real agreement and an imaginary ambivalence, both of which have real effects.’ We are always dealing with both affects, with ambition, and reason, with a city founded on a projection of our ideas of man, and a city founded on our rational utility. What Balibar stresses is that the society of reason, of the utility of man to man, is founded on difference, we are useful to each other insofar as we are different; while the society of affects, of ambition, is founded on an imagined similarity. This imagined identity, the other who is like me, is necessarily ambivalent, defined by conflict as much as agreement. Someone who wants what I want is potentially as much an adversary as an ally.

Balibar is not just an interpreter of Spinoza but a theorist of the nation and the state, and these two theoretical interventions intersect and extend each other. Balibar often presents the nation as an imagined community and the state, or at least the modern state, as a rational, or revolutionary, universal. As Balibar writes, “For my part, I consider the demarcation between democratic and liberal policies and conservative or reactionary policies today to depend essentially (if not exclusively) on attitudes towards ethnic discriminations and differences of nationality on whether pride of place is given to national belonging or emancipatory goals (the rights of man or citizen).” The dual foundation constitutes two different subjects, two different transindividual individuations. The first is that of homo nationalis, the human individual defined not just through his or her specific language, but most of all, through shared customs, habits and memories. The second is the citizen defined by an open transindividual process, by rights and obligations, which exist only as a collective project that is by definition universal. These individuations coexist, constituting the conflictual basis for different individuations and different politics. 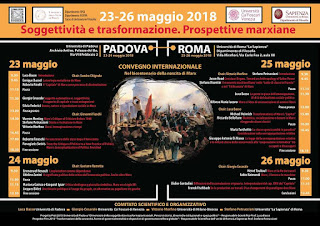 Turning now to Marx I would argue that one can find a similar, but opposed division of the imagination founded not on the nation or the state, but the relations of production. It is well known that Marx rather cryptically asserts that abstract humanity is the afterimage of abstract labor. As Marx writes,

For a society of commodity producers, whose general social relation of production consists in the fact that they treat their products as commodities, hence as values, and in this material [sachlich] form bring their individual, private labors into relation with each other as homogenous human labor, Christianity with its religious cult of man in the abstract, more particularly in its bourgeois development, i.e. in Protestantism, Deism, etc. is the most fitting form of religion.

One could read Marx here as completing Feuerbach’s project. It is not enough to reduce theology to anthropology, to find the figure of humanity beneath the projection of god, one must recognize that there is no humanity as such, there are only specific social relations which produce and reproduce a given figure of humanity. God, especially that of Deism and Protestantism, is not the product of some general longing of humanity, but of the particular society organized by the abstraction of wage labor. Other societies, other mode of productions, produce different ideas of humanity and different ideas of God.

Abstract labor is only one part of the selling of labor power. Its corollary is concrete labor, the labor of a specific individual performing a particular action. Marx does not connect this to any image of humanity, but it is possible to argue that the specific and concrete tasks gives us a different image of humanity. If abstract labor gives us the image of an abstract and interchangeable humanity, of everyone possessing the same capacity to be exploited, an image which culminates in the theological image of equality before god, then concrete labor gives us a different image, one of a differentiated society of different tasks and a humanity possessing different skills, an society in which “nothing is more useful to man than man” because every individual is different and distinct. Or, to put in Plato’s terms, a community made up of different individuals because none of us is self-sufficient. If one adds this the necessary corollary that the division of labor is not just distinct, not just the children’s book (or Plato’s) image of society as made up of farmer, baker, and shoemaker, but divided according to mental and manual labor, of conception and execution, then it is an image that is necessarily hierarchical as well as differentiated. It is not just that there are different individuals, and different groups, assigned to different tasks, but some are more equal than others.

Moving beyond Marx I think that it is possible to say that the deterritiorialization of abstract labor, the transformation of different individuals into bearers of labor power, necessary reterritorializes onto a hierarchy of not just individuals, but classes and even races. Despite what Marx says about the abstract idea of humanity it seems more accurate to say that the imagination is preoccupied with differences not abstract equivalence. The spontaneous philosophy of labor in capital is not one in which we see others as sellers of their labor power just like us, but constantly tell ourselves that people have the jobs they have because they are necessarily different than us, better or worse. Or, to put it in more spinozist terms, it is because the figuration of abstract labor as generic humanity is necessarily ambivalent, indifference to the specificity of the work is the ground of employment and unemployment, that the imagination of concrete labor is anthropologized. We look at those lower on the division of labor than us, stuck in demanding and demeaning jobs, as if they necessarily belong there so that we can reassure ourselves that our security is guaranteed.

Thus to conclude, it is not so much a matter of juxtaposing symbolic violence and economic exploitation, but thinking together the universality and the anthropological differences of the worker and the citizen. It is not just that the worker and citizen are undercut by imaginations of anthropological identity and difference, but that the two necessarily intersect, as economic precarity, the flip side of abstract potential, and national belonging affect and intensify each other.

One part of this, the presentation in Milan, is now online.

Posted by unemployed negativity at 12:35 PM