Imaginary But For Real: On Blackkklansman

Blackkklansman has come under criticism for twisting its true story into the shape of a cop film, warping any criticism of the structural violence of racism beyond recognition in the process. As Joshua Clover writes, "It is a police film the way Get Out is a horror film, adopting genre conventions to think through a particular set of problems about blackness." Except whereas Get Out uses horror to drive home the horrors of race, Blackkklansman would seem to defuse any critical force it might have in the morality and politics of the cop film.

I do not disagree with these criticisms at all; in fact, Clover's piece and an earlier tweet by Boots Riley almost convinced me not to see the film. However, when I did see the film I found myself thinking about it somewhat differently. As much as the film claims to be about some "Fo' Real shit" it is also a film about movies--as one would perhaps have come to expect from Spike Lee. Its opening shot is a scene from Gone With the Wind; David Duke later discusses Hattie McDaniels portrayal of Mammy when discussing his own nannie; Kwame Ture spends much of his speech discussing the racial politics of Tarzan films; Ron and Patrice spend go on a date in which they discuss Shaft, Superfly, and the films of Pam Grier in terms of their effects on their own aspirations and racism in general. Throughout the movie film is discussed as something that shapes who one becomes and how one acts. We are children of Scarlett O'hara and Richard Roundtree: to live where and when we do, in America in the twentieth century, is to look to movies to figure out how to dress, talk, and ultimately act and think.

If these bits of dialogue are not enough then there is also the film's climax. In a combination of formalism and historicism Lee frames the climax of the film as a bit of parallel montage around Birth of a Nation. Cutting together the two things that everyone knows about D.W. Griffiths, parallel montage and a contribution to American racism. The film cuts between two scenes. The first is that of a Klan meeting showing the film complete with popcorn. The Klansmen cheer at the film. These scenes are interspersed with scenes of Jerome Turner (played by Harry Belafonte) recounting the horror of a Klan lynching to a group of college students. He mentions Birth of a Nation too, discussing its influence on the revival of the Klan in the early twentieth century.  The students are horrified. It is the same film but seen in terms of its different effects, heroism on one side, horror on the other: two sides that will never meet. Lee follows this parallel montage with a more conventional version as Ron Stallworth rushes to stop a Klan bombing. Scenes of Ron Stallworth rushing to the rescue are intercut with shots of the a Klanswoman (technically the wife of Klansman) looking for a place to hide the bomb. If we wanted to follow Lee to film school we could call the first sequence a kind of "intellectual parallel montage" using the juxtaposing and parallel scenes to depict not different scenes action, but different interpretations, different effects, of the same film. Whereas the different lines of action parallel montage ultimately converge in a scene of confrontation, Ron tackles the bomber to the ground, the different lines of intellectual montage converge elsewhere, in the real world history of the Klan. 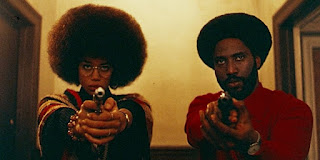 The Klan bombing is fictional, invented to fit the conventions of a cop film. It is followed by a second event, also fictional and glaringly so, in which the entire Colorado Springs Police Department works on a sting to arrest the most overtly racist officer. To be honest, I kept waiting for this scene to be revealed as a dream sequence. It rung false, not just in terms of the real world where racism is integral and not just accidental to policing, but also to the films own internal logic and narrative. Early scenes in the film foreground how much racism is a part of daily life in the police force. The film then closes on one of Spike Lee's signature dolly shots of Patrice and Ron, pistols drawn, converging on a window that frames a view of a burning cross.


After this scene, the film ends with documentary footage from the "Unite the Right Rally" in Charlottesville including the Dodge Challenger that drove through the crowd killing Heather Heyer and injuring nineteen others. The didactic point of these scenes is to end with the real David Duke discussing how happy he is with Trump's dog whistle call to "Make America Great Again," but I can't stress enough how horrifying it is to see these scenes on the big screen. The contrast between the two endings, the (fictional) police bust and homage to Blacksploitation that ends the film, and the real horrors that bring the film into the present got me thinking about a different way to view Lee's use of fiction and genre conventions. The glaring incongruence between the fictional resolution and the real world legacy of the events in the film may very well be the point. In the film the bad Klansman are defeated, the cops have seen the errors of their racist ways, and the good guys win, but in the real world the Klan praises the president (and are viewed by him as "good people" in turn) and things have not turned out quite so well.

Maybe then it is time to examine the cinematic stories we use to make sense of our lives, not just the obviously racist films, but the less obvious (and supposedly less pernicious) stories of "good cops" changing the system from within, of lone heroes who need only a gun, a girl, and cool leather jacket to overcome systemic racism. (Sorry to Bother you is the anti-Blackkklansman in so many ways not the least of which is its insistence on collective action outside of existing institutions as the only possible way out of the present). Perhaps, as Godard supposedly said, the characters of this film, good and bad, are living a bad movie. It is not just that David Duke and the rest of the Klansmen see themselves as donning the hoods that Griffiths put on the silver screen, but Ron and Patrice's leather jackets are costumes as well. Ron Stallworth can only imagine overcoming racism by aligning himself with the police as a force of justice. His consciousness has been produced by the very cop films he is now a part of. As they used to say, "There is a cop sleeping in all of us. We must kill him." Lee's film seems to show us how he got there, through countless movies and television shows about good cops bucking corrupt systems. 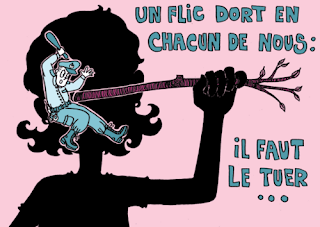 I do not think I am right about Blackkklansmen. Or, more to the point this is more about the film I saw, rather than the film that Spike Lee made. I think that Lee meant for the image of cop and activist to be a unity, where all I could see is a rift. Film is always a conflict and a struggle between the relations between images, sounds, words, and sensibilities that the director is assembling and the audiences own way of assembling and thinking through the same images and ideas. The filmakers control over the images is not total. Just as Griffiths images of heroic white knights play differently to audiences inside the film, Lee's images of a buddy picture between cop and activist, between anti-racist struggle and the police force, play differently to audiences watching it. What Lee meant as a pro-cop movie not only stretched credibility to the point of falling apart, but snapped back on itself becoming instead, at least in my experience, an inquiry into the cop movies that have made up not only Stallworth's sensibility but Lee's as well.

My post is just a thought experiment, albeit an unwitting one that I subject myself to in seeing the film.  It is just a blogpost after all, but if you have read this far I suggest you also read this from the people who were part of this movie but contest its narrative.

Posted by unemployed negativity at 10:55 AM