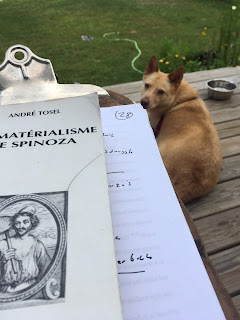 
The different Marxist approaches to Spinoza can be viewed through the different aspects of Spinoza's thought they take up, often corresponding to different parts of the Ethics. For Althusser it is epistemology (and Part Two as well as the Appendix to Part One), for Negri it is ontology (roughly Parts Three and Four), and for Lordon it is Anthropology (and Part Three). Of course things do not always score so neatly, there are also those thinkers that traverse ontology, epistemology, and anthropology, an approach that is fitting for philosophers not animated by such scholastic distinctions. However, all of this is to introduce André Tosel's Du Materialisme de Spinoza.

Tosel's book, which is really more of a collection of essays and points of inquiry, approaches Marx and Spinoza through their different materialisms. This difference refers to both the theoretical basis of their materialism as well as its particular practice and effects. Spinoza's materialism is an ethical-political materialism, a materialism framed in terms of the material conditions of servitude and liberation. The various areas of inquiry that make up its parts from ontology to anthropology are necessarily partial and skewed towards this project. This is why the body, an area of investigation that would otherwise be central to a seventeenth century materialism, is given a partial and provisional definition through a series of lemmas. The body, or bodies, does not need to be examined in detail, just enough of its structure and relations to understand its effects, on thought, on affects, on everything that determines and shapes the transition from passivity to activity. This is the clearest example of the partial and practical perspective underlying a seemingly totalizing book, but it is not limited to it. Every seemingly speculative topic in the Ethics gets its coordinates from the ethical  transformation that underlines and underwrites it. As Tosel writes;

"The principal object of the Ethics is not therefore the infinite substance, but the process of ethical liberation as far as it goes through the determination of being as "causa sui" substance. The red thread of the Ethics is precisely, from the onto-cosmological conditions of natural productivity to the intertwining, succession and competition between the modes of production of human individuality and the forms of life that they determine."

Tosel's reading is Althusserian in spirit, emphasizing the particular practice of philosophy underlying Spinoza's thought, even as it is against the letter of Althusser's thought, who for the most part bracketed ethical transformation in order to focus on the division between knowledge and imagination.

However, this does not mean that Spinoza and Marx can be relegated to two separate fields of inquiry, one relegated to ethics and politics the other to economics and history. In the first place this is because Spinoza's definition of ethics is not some attempt to arrive at the good life, or the pure ought. It is, as Tosel's choice of terms underscores, about the mode of production of a particular individuality; or, more to the point about the conflict and transformation of (at least two) different modes of individuation, one dominated by imagination and sad affects the other by knowledge and activity. As Tosel writes, "each way of life is conceived from its production and corporal practice (poeisis and praxis) , which combines economic appropriation with ethico-political behavior.”  These modes of individuation necessarily include their conditions, the social relations that produce and reproduce them. Tosel argues that to the extent that Spinoza includes economic activity, the transformation of nature and social relations, he does so in a fundamentally ambiguous manner. This ambiguity is tied to the ontological nature of its formulation. Unlike Locke or Hobbes Spinoza does not address labor or exchange as fundamental activities of this appropriation, defining it instead broadly as a physics of bodies and their relations. Every body requires other bodies in order to sustain or perpetuate itself. The anthropological effect of this the well known formula, nothing is more useful to man than man. A phrase that could be understood as part of a communist ideal or as utilitarian exchange.

There is an economics, or a theory of appropriation however ambiguous, internal to Spinoza's ethical-political materialism. Of course one could make the same point working from the opposite direction,  there is an ethical and political materialism, however inchoate, internal to Marx's historical and economic investigations. Marx's inquiry in the mode of production is cannot be separated from the mode of subjection. Marx and Spinoza's different materialisms overlap as much as they can be separated by object and epoch. As Tosel writes, "Spinoza’s combat against the theological political bloc, against the limitation of life and of knowledge of the first kind is continued by Marx against the forms of domination imposed by constraint of capitalist economy.”

Tosel proposes a different relation between Spinoza and Marx, not the conjunction of two separate philosophies joined by a hyphen, nor the use of concepts and problems from one to supplement the other, but a conjoining of two different, at times opposed, but also intertwining projects of liberation, an ethical transformation that is also a political and economic transformation.