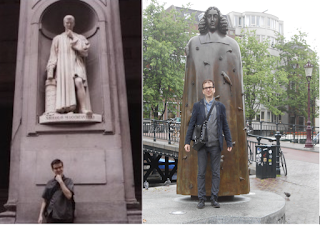 Posing with Machiavelli and Spinoza
Since Vittorio Morfino's The Spinoza-Machiavelli Encounter: Time and Occasion is out in paperback, and since I am teaching both Machiavelli and Spinoza this semester, I thought that I would write a short response to the book. The strength of Morfino's book is how it manages to both do its due diligence, tracing the influences and intersections of Machiavelli and Spinoza, while simultaneously making that encounter something truly inventive.
My focus on the book is on a small point, but one that has stuck with me since I read it years ago, and that is Morfino focus on the way that the Machiavelli-Spinoza encounter entails the reformulating of the same problems in different idioms. The historical dynamic that Machiavelli presents in terms of virtú and fortune is reframed in terms of election, of God's internal and external aid in Spinoza. As Spinoza writes,
The only thing which distinguishes one nation from another, then, is the social order and the laws and under which they live and by which they are directed. So the Hebrew was not chosen by God before others because of its intellect or its peace of mind, but because of its social order and the fortune by which it came to have a state and kept it for many years.
And as Morfino comments,
By identifying the Hebrew concept of election with the pagan concept of fortune, Spinoza at once neutralizes the imaginary content of both and constructs a new concept, one that allows him to think the history of a people as the simultaneously necessary and aleatory encounter of the social structure and external order of causes.
And later in the same chapter:
Spinoza's schema directio Dei = [auxilium internum + (auxilium externum = fortuna)] thus translates Machiavelli's political schema history =virtue + fortune on an ontological level. Given this proximity in the conception of history, a new question can then be posed: is the concept of election, as Spinoza develops it concerning the ancient Hebrews--namely, the effect of 'God's external aid', the fortune that influences human affairs in an unpredictable way--suggested by Machiavelli's thought?
As, I said, this interpretation stuck with me, reconfiguring how I read both Machiavelli and Spinoza. On the first, and most immediate level, Morfino's reading sets up tension between "imaginary content" and conceptual definition. It is worth noting how burdened the imaginary content is in both cases. Machiavelli's virtú and fortuna culminates in the unfortunate and infamous claim to treat fortune as a woman, and a general masculine understanding of virtú. As I mentioned I just taught Machiavelli and as much as I give the students credit wanting to discuss Machiavelli's sexism, such discussion risks effacing the concept of virtú as the imaginary presentation; the figure of virile manliness, obscures the philosophical conceptualization of acting in the conjuncture. On this point Spinoza does not fair much better, his remarks on the Hebrew state do not immediately generate discussion on the constitution of nations and peoples from practices and habits, but often seem overburdened by his own history with his religion. 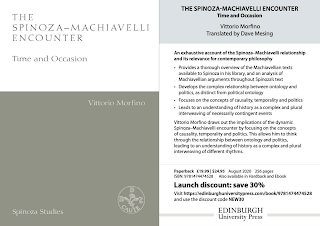 Given the burdens of the "imaginary content" why not dispense with it altogether, present the concept in its purity. Wouldn't that be the philosophical ideal, ontology without metaphor, concept without figure. Spinoza answers that question:
Hence it follows that if anyone sets out to some doctrine to an entire nation--not to say the whole of mankind--and wants it to be intelligible to all in every detail, he must rely entirely on an appeal to experience, and he must above all adapt his arguments and the definitions relevant to his doctrine to the understanding of the common people, who form the greatest part of mankind. (TTP Chapter 5)
This idea, another version of the limited efficacy of the true, is not without its precedent in Machiavelli, who knew how to dress a concept up in the finery of centaurs and bloody knives giving it the necessary purchase on the imagination. The imaginary content is both the condition and limit of the communication of the concept. If philosophy can dream of the purity of the concept then political philosophy knows that is impossible.
These burdens of imaginary content remind me of Antonio Negri's book on constituent power (his best book in my opinion, or at the very least one worth revisiting after Empire has gone from hot to not). In that book Negri argues that the emergence of constituent power as a concept is obscured by the various ways in which it is tied back to the unity of the prince, as a singular figure, or even god as a totality. Read together Negri's warning and Morfino's provocation reveal what is perhaps at stake in the examination or the invention of a lineage from Machiavelli to Spinoza or from either of them to Marx. It is not just a matter of influence, where Spinoza is influenced by Machiavelli, or even overlap as in the case of Spinoza and Marx, but the way particular concepts emerge out of being read together.
There still is the matter of what concept, what is produced in this encounter of Machiavelli and Spinoza. A full answer to that would entail reading Morfino's book, which you should, but a shorter answer can be found in what it would mean to think history outside the figure of the prince or of the institutions of the state, to think the constant intersection of actions and institutions that make up history.
Posted by unemployed negativity at 10:11 AM