After a mercurial career Steven Soderbergh seems to have more or less settled into the heist film. The three Oceans films, Logan Lucky (dubbed Oceans 7-11 for the way it transposed those films into a different class milieu), and now No Sudden Move. The return to the same genre does not dispense with the shifts and shimmers through other genres and styles, the latest is a noir period piece set in fifties Detroit, and with that shift comes another shift. Jameson states that heist films are in some sense about the representation of work. Or, more to the point, he states that they are about unalienated work. However, I would like to turn his assertion, as offhand as it is, into a question. How does the heist film represent work, and how does this representation relate to the question of how work is undertaken and understood in capitalism.

No Sudden Move begins with a job offer, with multiple job offers for a lucrative heist. One that immediately dispense with some of the cliches of the heist film. We do not know who is putting the gang together, everything is mediated by middle men, and, just as importantly, the particular job, holding a family hostage while the husband goes to retrieve a document, does not seem to require any specific skill at all. This is not the celebration of the division of labor, of highly skilled workers, that make up Soderbergh's earlier films with pickpockets, demolition experts, and even acrobats all working together as part of a team.. Lastly, it should be noted that the not only is the work unskilled, more or less, it seems to be too highly paid. Each man is offered over five-thousand dollars for what amounts to three hours work. The actual prices differ for the different men, depending on their background and race, which is not the only time the film acknowledges the realities of racial hierarchy and exclusion in nineteen fifty-four Detroit.

The two principal members of this ad hoc gang, Curt Goynes (Don Cheadle) and Ronald Russo (Benicio Del Toro) have their reasons for distrusting this offer but a desperate enough to take it. They see the better and do the worse, as Spinoza would say because they need the money, as Marx would add. In the case of Goynes this need has to do with his desire to purchase land, or property, that used to belong to him. The film alludes to the dispossession that not only defines wage labor in general, even those in the criminal underground have nothing to sell but their labor power, but the specific dispossession that that black workers face in the US. The film takes place on the eve of the destruction of the black neighborhood, Black Bottom which is being raised for "urban renewal," the building of a highway. The people who lose their homes from this process are not only without property, but also are subject to redlining that will leave them permanently dispossessed. This is referenced by Goynes in the film.

Actual historical events do not just make up the backdrop of the film, defining the context and motivation of characters they concern its central plot. The document that makes up the film's MacGuffin is the design for the catalytic converter that the big auto companies are trying to suppress. No Sudden Move is not the first film in recent history to use this conspiracy as its plot. The Nice Guys did the same thing a few years earlier. Moreover, the collusion on the part of the auto industry to undermine public transportation was part of the plot of Who Framed Roger Rabbit? (As an aside it would be interesting to do an investigation of the way that some of the most repressed stories of American history make their particular return through films dealing with the fantastic. I am thinking of the way that the Tulsa Race Massacre appeared alongside superheroes and monsters in Watchmen and Lovecraft Country).

The automobile as conspiracy genre, if such a thing could be said to exist, undermines both the image of capitalism, which posits competition rather than collusion and the image of the automobile. The automobile is the symbol of independence in American culture. No Sudden Moves has many references to getting in a car, hitting the road, and starting over. Seeing the coordination, the collusion, and corruption that makes this independence possible, that replaces neighborhoods with highways, trolleys with roads, punctures this image of independence, exposing the heteronomy at the heart of autonomy. This independence, which is the spontaneous ideology of the automobile, is possible through the way the automobile occludes its dependence, dependence on a road system, on the destruction of public transportation, and on the suppression of the real costs of driving and fossil fuel use.

Back to the plot of the film, and admittedly I am skirting over the twists and turns, once Goynes and Russo get their hands on the document they do everything they can to leverage it for protection and personal gain. They keep moving up the hierarchy from the local mob to the automobile companies behind the plot. This leads to the film's big cameo part. A recognizable Soderbergh actor greets the two characters in the conference room of a major hotel. The scene seems to be a nod to Network, to the idea of meeting the final boss of capital itself in a room of dark wood, fine leather, and brass lamps. Only in this case the boss does not chastise the men for violating the rules of nature, but commends them for making it so far, for their grit and determination, for their reach that exceeds the laws of history, nature, class, and caste. 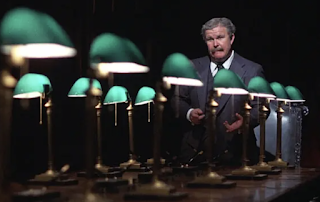 The film at this point plays like a dark version of a Horatio Alger myth. Only in this case the gumption the characters have shown is not their hustle in the mailroom but the ability to blackmail and conspire. As much as the actor plays the embodiment of capital, he speaks of it as entirely impersonal force, as river that he navigates but does not control. Taking no responsibility for the remaking of Detroit in the image of the automobile. He is is merely the personification, the träger, of impersonal forces. As he states of his own accumulation, “It’s like a lizard’s tail. I work, it grows. I sleep, it grows.” As much as he shrugs off his own responsibility for the destruction of Detroit's black working class, and the destruction of the environment, he is quick to remind Goynes and Russo that they are even less agents, less autonomous. They play by rules they cannot see, like automobile drivers following roads that control their paths even more effectively the less they think about them.

The big boss pays them for the documents, but Goynes and Russo are both betrayed before they can make it off with the money. The money is returned to the Consolidated Car Association, only because of Goynes and Russo's work, because of their ability to play off of different parties, finding multiple buyers, the car association gets back more than they paid out. M-C-M', as Marx wrote, money is laid out, it pays for work, for labor power, to accumulate more money. It grows while the bosses sleep because they are not the ones making money.

So where does this lead us with our first question? The question of work. Work exists to make the wealthy wealthier. Those are the rules of the road that everyone must play by. The best one can do, the film suggests, is make it out alive.

Posted by unemployed negativity at 5:01 AM