Most of the time I carry a small notebook with me. Usually it is one of those ubiquitous moleskin notebooks (that word unsettles me, who would want to skin a mole?). However, as of late it has been a snazzy little journal with a robot on the cover (made by these fine people). In this journal I write down quotes from books that I am reading, fragments of half formed ideas, and even a few titles and outlines for papers or even books that I one day might write. Since I started the blog, however, I have been writing in my book less and less, and I realize that some of these fragments of ideas have made it here on the internets (why does that little "s" on the end of the word still amuse me?). I am not sure if they belong here, they are after all only sketches, or a series of ideas that are almost like a "connect-the-dots"drawing, only without the numbers to guide anyone in making them. More importantly they are not the sort of thing that I thought that I would write when I started this thing--I thought that I would write more about movies, music, and my many adventures.

What I am left with is a veritable backlog of things that I meant to write, ideas formed in the shower, while walking, or whatever, that have made it nowhere. Which is not too different from my usual life. In fact, I think it might be possible to chart a kind of ecology of ideas, in which each idea has its own particular life span related to both the conditions of emergence and validity--some ideas make it into writing and some barely survive the sentence in which they are first articulated. It is not always the best ones that survive.

For example I never wrote about The Black Dahlia, perhaps the oddest film experience I have had in awhile. First, I should mention that it was the first time I was seeing a film with my new friend: a situation fraught with all kinds of mores and customs to be negotiated, talk during trailers? (acceptable), during the film? (unacceptable, unless the film is bad), etc. Add to this the fact that this friend is a heterosexual male, which raises the whole "guy-date" problem (did anyone see that ridiculous New York Time piece about this problem? Heterosexual men at great pains to not even give the appearance of being on a date), specifically it raises the problem of seating. Some men, like my brother, insist on an empty seat between two men in a theater, lest anyone think that they are dating. (For the record, I love my brother, but I would never date him--too much history). Anyway, I opted to sit next to my friend. Then comes the movie which is just odd, so odd that I can only conclude two possible things about it:

1) Brian De Palma is trying to prove the it is impossible to make a new "film-noir" film (is that redundant?). As Jameson and Zizek remind us, it was always already impossible to make a "film-noir" movie, since the term itself is based on the French reception of certain American B movies, thus the term relates more to a perspective, something that happened in translation, than an actual genre. However, there is a certain way in which the film refuses any suggestion of depth that was characteristic of noir, that made it possible to see in it a conflict between an existential hero and a corrupt world. All of the actors in De Palma's film are completely opaque in terms of their motivations, or if not they come off like copies of a copy. The mostly young cast also seem completely lost in the historical period. As my friend pointed out, when Josh Hartnett mentions Rita Hayworth, you get the distinct impression that he has no idea who he is talking about. It is perhaps for this reason that the film made me think of Brick, which one could say is a more successful way of making a new film noir, or maybe I was just thinking "I would rather be watching Brick right now." 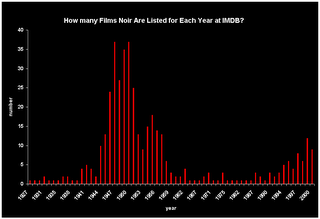 I should mention that as far as a first time seeing a film with a new friend, it went great. By the end we were cracking each other up. It was a little weird to be the only people laughing in the theater, but it made for a more enjoyable experience.
Posted by unemployed negativity at 9:43 PM