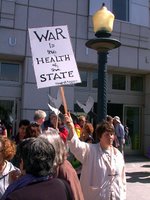 I recently stumbled across this article in the New York Times titled "If Hollywood is a Game, this Player Says that it is Over." The article is on Michael Tolkin the author of The Player, the book that was the basis of Robert Altman's film. In the article Tolkin argues that what Hollywood is facing is nothing less than a collapse of the basic narrative structure of the hero's journey.

“The movies haven’t been very good the last three or four years, they really haven’t,” he said. “Everybody knows that. At least that, maybe more. And what they were will never return.” The source of all this creative-industrial-complex angst is the death of what he both eulogizes and parodies: the classic journey-of-the-hero story structure, analyzed by Joseph Campbell in the 1940's, popularized a generation ago by George Lucas through “Star Wars,” spouted and shorthanded by studio executives ever since, and all but trampled to death, Mr. Tolkin said, by nearly every subsequent action movie and thriller that Hollywood has turned out.
Or as Griffin puts it: “Physics cracked the atom, biology cracked the genome and Hollywood cracked the story.”

Now there is perhaps nothing less original the bemoaning the fallen state of Hollywood, but what is interesting is the reason that he gives for it. It is at this point that the article caught my eye:

“I don’t think America’s had a good movie made since Abu Ghraib” Mr. Tolkin said, before clarifying that he’s talking about big movies, not the minuscule ones that have met the industry’s quotas for unembarrassing award nominees.“I think it showed that a generation that had been raised on those heroic movies was torturing. National myths die, I donÂ’t think they return. And our national myth is finished, except in a kind of belligerent way”

Now this is perhaps a bit too optimistic, after all it assumes that everyone is upset about Abu Ghraib, and the war for that matter. (Plus it does nothing to explain The Phantom Menace.) At the same time, it does raise the interesting issue that if war remains our basic template for heroism, and the current war is one that is at the very least fraught with ambivalence if not disdain, where does that leave us with respect to our myths?

A quote from Jameson ups the ante on this: "The west has long since found itself unable to think the category of the 'great collective project' in terms of social revolution and social transformation. But we have convenient subsitute, in any case far less demanding on the imagination: for us, and as far back in 'modernity' as we can determine, the great collective project--the 'moral equivalent of war'--is simply war itself. It is finally as a war machine that the efficiency of the state is judged: and no doubt modern warfare offeres a very advanced form of collective organization indeed. But a fundamental structural and ideological imagination is surely demonstrated by this lack of alternatives, and by the persistence of World War II in the American mind as the great Utopian moment of national unification and the lost object of our political desire" (A Singular Modernity pg. 212).

What strikes me about this is how our current war pales in the face of this, it is a war without a "collective" dimension (that is unless you count those-"support-the-troops"-magnets-that demonstrate-unconditional-support-without-damaging-the-resale-value-of-one's-car). Or, perhaps more accurately it is a war which manifests itself as a collective insecurity. We all participate through fear, through the spread of the news of the latest thwarted terrorist plot, or news tidbit about unprotected water towers and reservoirs.

Ranciere argues (Yes, I have been reading a great deal of him as of late) that this offers a new definition of the state, or a definition of the new state. Playing off of the current administrations "old/new Europe" distinction, in which "old" Europe followed the electorate's hostitility towards the war in Iraq and "new" Europe towed the line, treating democracy like a "focus group," Ranciere argues we should define the "new" democracy, the new state as follows:

The advanced capitalist State is not one of automatic consensus, of adjustments between the daily negotiation of pleasures and the collective negotiation of power and its redistributions. It does not proceed by defusing passionate conflicts and disinvesting values. It does not self-destruct in the limitless freedom of digital communication and the polymerization of individual identities so destructive to social ties. Where commodities rule without limit, whether in post-Reagan America or post- Thatcher England, the optimal form of consensus is one cemented by fear in a society grouped around the warrior State. ("On War as the Advanced Form of Advanced Plutocratic Consensus" pg. 254).

So perhaps we will need new myths, new stories, that are no longer based on the outdated hero (Tolkin's example) or even the sublated collective project (Jameson) but on a society governed by fear and separation.

Posted by unemployed negativity at 10:23 PM