Perhaps nothing separates me from the kids of today (by which I mean college students) than the concept of "selling-out." It is utterly alien to most of them. They have no problem with the fact that the bands that they like are appearing on television shows and commercials.

(There used to a lag between a song being released and it appearing on a commercial. It used to be years. Then it shrunk to less than a year. Now it is a commercial before it is a hit. Think of Nick Drake, that Volkswagen commercial was the best thing that happened to him, too bad he was already dead.)

Now I cannot pretend to speak for my entire generation, but for at least a certain section of quasi-punk/hardcore kids "selling out" was not just an issue, it was the issue. It was the entirety of critique of capitalism, and more than that it was our existentialism, or politics, our bread and butter. We would spend hours discussing who sold out and exactly when. It still haunts me.

In fact I may have pinpointed the exact moment when I sold out, it was when I bought these: 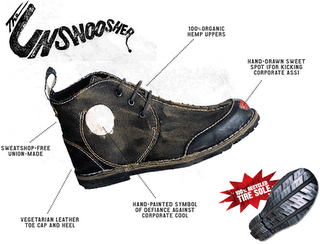 100% Organic Hemp, 100%Recycled tire, Union Made shoes. A product that complete expresses my particular combination of social and ecological concerns. Not to mention all of that exposed stitching. (And I am not going to mention the kicking corporate ass part, because that would be embarrassing).

There is something about identifying with a brand any brand even if it meets you halfway that just feels like selling out.

Since I am plugging products I will say that I am thoroughly enjoying the new album by The Thermals, "The Body, The Blood, The Machine." I will spare you the attempt at rock journalism and just say punk rock concept album, that is right, complete with tales from a dark fascist-christian future (or is that present?).
Posted by unemployed negativity at 11:00 PM

Email ThisBlogThis!Share to TwitterShare to FacebookShare to Pinterest
Labels: commodity, Me, Music

I for one would prefer not to be spared the rock journalism. Bring it on!

Re: (the/The) Youth of Today, were you ever straightedge?

Yes, I can definitely say that I was physically strong, morally straight (actually that is not true I was always pretty scrawny as a straight edge kid). But I am much better now.

My favorite bar in town has Minor Threat and Youth of Today on the jukebox. As much as I do still like those songs, they're not as good in bars as I'd have thought. Those memories of being nailed to the X just don't make me laugh, except in mild embarassment.

Unemployed Negativity very nice blog!
would it make fun for you to make money in the Internet?
yes?
more information
www-franco.blogspot.com
see the video