Wendy Brown’s “American Nightmare: Neoliberalism, Neoconservatism, and De-Democratization” (Political Theory 34/6) is a great article, part of a growing literature of critical philosophical responses to Neoliberalism. (Well, that sentence is a wee-bit hyperbolic, since I am primarily thinking of two other things: Brown’s essay in Edgework and Foucault’s Naissance de la Biopolitique, the latter of which is technically almost thirty years old). It is primary strength is that it takes as a philosophical problem the articulation of neoliberalism and neoconservatism.

It has been commonplace on the center-left to dismiss the relationship between these two political “rationalities” (to use Brown’s term) as one that is purely strategic: some dark cabal between Dick Cheney and James Dobson. Or, to cite the argument of Thomas Frank’s What’s the Matter with Kansas, to see the neoconservatism of the right as simply the sheep’s clothing of values (technically a lamb) worn by the wolf of privatization. Brown, however, argues for a more intimate, even essential, connection, based upon their shared anti-democratic tendencies. Neoliberalism’s tendency to privatize social issues (to depoliticize them), not just in the literal sense of turning public spaces to private profit, but in the sense that every social problem becomes a private matter, addressed by commodities, crime by gated communities, pollution by bottled water, etc., paves the way for neoconservatism.

At first it would seem that these two rationalities are linked by more of what they oppose than what they have in common. What they oppose are first and foremost equality, which neoliberalism can only see as an authoritarian imposition on the “natural” competition and hierarchies of the market and neoconservatism sees as a violation of the authority of church and family. But they are also opposed to freedom and democracy defined in anything other than individualistic terms. However, the two rationalities do not just share the same enemy, which would have to be called democracy, or democratization. They also work on the same terrain or conditions, reinforcing each other as they oppose each other. As Brown writes: “What this suggests is that the moralism, statism, and authoritarianism of neoconservatism are profoundly enabled by neoliberal rationality, even as neoconservatism aims to limit and supplement some of neoliberalism’s effects, and even as the two rationalities are not concordant. Neoliberalism does not simply produce a set of problems that neoconservatism addresses or, as critics claim, operate as neoconservatisms’s corporate economic plank. Rather, neoliberal political rationality…has inadvertently prepared the ground for profoundly antidemocratic ideas and practices to take root in the culture and subject.” Thus it is possible to see both as privatizations, as reductions of the social to the individual. Neoliberalism reduces the social to the individual of the market, defined by calculations of cost and profit. Neoconservatism reduces society to the individual of morality, defined by faith and sin.

What strikes me about the general problem of neoliberalism and neoconservatism is that the very problem appears in fundamental points in the history of philosophy, albeit modified. From a particular perspective one could read Hegel’s Philosophy of Right, specifically the dialectic of “civil society” and the state, as a contradictory logic which demonstrates how the possessive individualism of the market is reinforced by the authoritarian tendencies of the state. As is so often the case, Hegel is most revealing about this in a remark prior to the section on ethical life where he discusses Protestantism (a conceptual stand in for subjectivity) and Catholicism (a conceptual stand in for the objectivity of institutions). “A longing may therefore arise for an objective condition, a condition in which the human being gladly debases himself to servitude and total subjection simply in order to escape the torment of vacuity and negativity. If many Protestants have recently gone over to the Catholic Church, they have done so because they found that their inner life was impoverished, and they reached out for a fixed point, a support, and an authority, even if what was gained was not the stability of thought.” Unlike the latter discussions of civil society and the state, which focus on the structural conditions of competition and overproduction, this remark, which completes part two of The Philosophy of Right, offers an existential understanding of the dialectic.

I foreground this existential, or subjective dimension, in part because of Brown’s remark about the “culture and the subject,” but also because I would like to drawn a point of comparison between dialectics as a logic of the conjuncture and Deleuze and Guattari’s logic of deterritorialization. To quote the famous passage from Anti-Oedipus:

“Civilized modern societies are defined by processes of decoding and deterritorialization. But what they deterritorialize with one hand, they reterritorialize with the other. These neoterritorialities are often artificial, residual, archaic; but they are archaisms having a perfectly current function, our modern way of ‘imbricating,’ of sectioning off, of reintroducing code fragments, resuscitating old codes inventing pseudo codes or jargons…These modern archaisms are extremely complex and varied. Some are mainly folkloric, but they nonetheless represent social and potentially political forces…. Others are enclaves whose archaism is just as capable of nourishing a modern fascism as of freeing a revolutionary charge…Some of these archaisms take form as if spontaneously in the current of the movement of deterritorialization…Others are organized and promoted by the state, even though the might turn against the state and cause it serious problems (regionalism, nationalism).”

By way of a conclusion: I take Brown’s essay to be something of a provocation, an attempt to grasp the logic of the current conjuncture, the intersection of the seemingly opposed rationalities of capital and the state, freedom and authority. To which I would add, or have attempted by way of Hegel, Deleuze, and Guattari, that philosophy is not free of this logic, that perhaps in some form or another all thought of society has tried to grasp the problem of capital and the state, under various names, dialectics, desiring-production, etc. 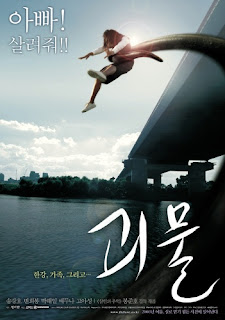 Finally, I just want to add a note about The Host. A film that could take the mantle of the most biopolitical film of the year. Now it is commonplace to understand horror films as the projection of some cultural anxiety (Godzilla and the Atom Bomb, Invasion of the Body Snatchers and communism), however, I do not think that would apply here. The monster in this film does not stand for anything, if only because the film spends so much time on the “real” threats that it would represent, pollution, disease, chemical weapons, all of these things are given full reign within the plot of the film. These things all appear as “conditions” within the film, in that there is a pretty standard monster movie narrative (tampering with nature creates monster which harms humans and must be destroyed), which is refracted through the lens of biopolitical panic and authority. It gives a vision of a state which pollutes and contaminates the environment while simultaneously offering itself as the only possible protection of this environment.

Posted by unemployed negativity at 9:25 PM