Initially, it occurred to me that this image, with its evocation of sharks riding storm surges into city streets and preying on beleaguered hurricane beings, had already been done as film (albeit yet to be released) as an example of life imitating a bad movie. 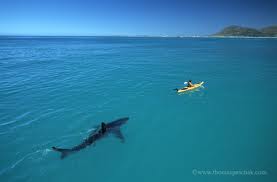 There is nothing exceptional about this little story, it is in some sense mundane, there are countless youtube phenomena that turn out to be fakes, but it does illustrate certain things. First, we have the TV news, which has responded to the decline in audience share and profits and the rise of  digital image capturing devises (cameras, smart phones, etc) by more or less outsourcing its news gathering." Send us your pictures, video, comments, and tweets," is the demand made every newspaper and television station. This might be a way to make up for the loss of reporters, or it might be a way to gain audience, perhaps the news editors figure that people will watch and read just to see if their images and comments have made it onto the screen. We could celebrate this breakdown of the distinction between author and producer, see it as the democratization of the news: "You Report, You Decide," or something to that effect. However, doing so overlooks at least two things. First of all, there is the news media's imperative to capture attention, in this case, to read the storm of attention by offering the most extreme photos and the satellite pictures with the most vivid colors. That this fake image got past the editors, verification and checking second sources being a thing of the past, reveals something of this demand to out sensationalize other channels, other media. The might have the picture of the wind toppling a Mcdonald's but they do not have the blood thirsty shark cruising along the interstate. Second, and with all apologies to Walter Benjamin, any simple identification of the author as producer overlooks the way in which affects, such as fear, and imaginaries, such as the image of the shark, are disseminated just as fast as digital images.  The audience that produces is itself a product of culture industry, to frame this whole issue in terms of the Benjamin/Adorno dialectic.

This brings us to sharks, my childhood object of fascination and fear. It will one day be necessary to write the history of the shark as image, as spectacle (perhaps this has already been done). This history, at least the history that I am thinking of, begins with Jaws, which we all know begins the history of that unique cultural form, the summer blockbuster. Despite this success at the level of form, Jaws has not really been duplicated at the level of genre. There have been a handful of sequels, a few lackluster shark movies, and the occasional piranha or killer bear. (One is reminded of Nobuhiko Ohbayashi's remarks about the limits of the culture industry, "A hit movie about shark attacks leads to a movie about bear attacks. That is the best they can do.") This failure at the level of fiction has been more than made up for at the level of fact, or pseudo-fact: we do not get a shark movie every year, or every few years, as we do slasher films, demonic possessions, zombies, and other variations on the horror genre, but we do get Shark Week. Jaws has permeated our consciousness in countless staged attacks by sharks on chunks of meat and dummies made up to look like surfers.

It is possible to see the shark as the token image of the anthropocene, of not only the destruction of the oceans and the environment, but our own self destruction as well, our inability to think through these dire times. Humanity jumping the shark.


It thus seems fitting that Donald Trump is obsessed with shark week not just because he is the presidency jumping the shark, a desperate attempt to revitalize a collapsing institution with every shameless trick, but because shark week is the logic of his politics. He lives off of invented threats from illegal immigration to the specter of transgender people in the military, making victims into villains and villains into victims all with help of memes and doctored images. To borrow a phrase from Félix Guattari, Shark Week is the collapse of three ecologies, natural, social, and psychic. No species can survive that.
Posted by unemployed negativity at 9:01 PM