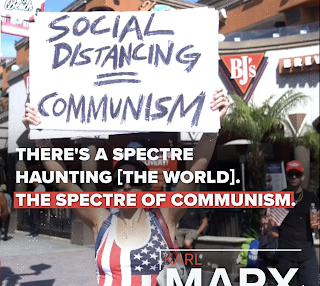 The second limitation I would like to address is less a statement that the Manifesto makes than something it presupposes. Marx's famous first lines about a "Spectre" rests on the fundamental idea that ghostly fears relate to real conditions. That ghost can be made flesh. (I realize that I sound a lot like Derrida's Spectres of Marx here, and as someone who was in grad school in the late nineties that is the last thing that I want to do) If people are afraid of communism, seeing its ghost, then that ghost must have real power, be related to a real force. Red scares may be excessive, hyperbolic even, but they always relate to some threat in reality.

This is a claim that is harder and harder to maintain. In the years since the collapse of the Soviet Union red scares have not dissipated, even as the threat underlying them seems to wane. Richard Seymour has referred to this tendency as an anti-communism without communism.  As threats and fears of communism seem to linger long after Several questions follow from this: Why has the spectre of communism not only outlasted its body, but, more importantly what makes animates this ghost. What makes it a spectral reality?

I would like to answer this question by returning to the previous post. The idea of capital as ruthless modernization, as a mode of production in which, to quote the famous lines, "All that is holy is profaned and all that is solid melts into air" overlooks the way in which capitalism requires its own faith, its own symbols. By faith and symbols I am not referring by ideology, at least in terms of how ideology is generally understood.a more or less common conception of ideology takes its bearings from Marx’s figure of base and superstructure. The economy, which includes selling labor power is part of the base. Ideology is part of the superstructure distant from the economic demands of the base. As much as it works in the service of the economy, reproducing the relations of production, it does so in and through its distance from the economy. Ideologies speak of morals, religion, and nation, and in doing so they necessarily reproduce the conditions through which workers return to work, but they do so without directly addressing the economy or the world of work. Ideology serves the economy, reproduces the relations of production, by eliding it or not addressing it at all. The corollary of this view of ideology is a view in which the economy, capitalism, is bereft of any meaning, any symbolism. It is as Marx described it, system in which all of the values and norms of culture and society are dissolved in the “icy waters of egotistical calculation.” The economic world is not only disenchanted, but without meaning, axiomatic in its function. These two ideas, the extra-economic nature of ideology and its corollary the meaninglessness of the economy, ideas which appear in a nascent form in Marx’s writing, have only continued to develop to become basic axioms of critical thought. The economy has been presented as an iron cage, as functioning through axioms devoid of meaning and motivation, while ideology has subsumed all of culture.

To put this in Deleuze and Guattari's terms, following up again on the previous post, it could be possible to say that not only does capital simultaneously reterritorialize and deterritorialize, reviving codes and archaic beliefs, but that reterritorialization often falls directly back onto the economy, as the relations, concepts, and terms of the economy become invested with symbolic value, becoming our "religion of daily life."

Such an assertion goes directly against various versions of what could be called "the disenchantment thesis," the idea that capitalism makes the world more rational but less meaningful. Such a thesis is found in various places, even Alain Badiou writes about capitalism as "the desacralization of the social bond." I would argue that what this formulation misses is the way in which relations and concepts of economic life have a directly ideological as well as economic function. Work is not just integral to wage labor, to the fundamental economic relation of selling labor power, but is also the basis for an entire ideology of worth, value, and discipline. A similar point could be made with respect to money, capital, which has a symbolism and a mythology that exceeds its economic function. Capital, even the appearance of possessing capital, can make even the most worthless human being appear to be worthwhile. The spontaneous ideology of the economy should not be seen as an effect of the power of the economy, of its ability to remake culture in its own image, but of its limitation. As capitalism is increasingly unable to offer the material rewards of work, as work fails to secure housing, security, and the consumer items which are supposed to be its reward, it becomes increasingly spiritualized. Work is supposed to be meaningful, to provide meaning.

It is from this perspective that we can make sense of the tendency to consider nearly anything that disturbs this new religion of daily life "communism." Social distancing is communism if you understand capitalism to be not just an economic order, defined by commodity production and wage labor, but also a spiritual order defined by a commitment to work as the basis of self worth and meaning. Thus, contrary to the claims of conspiracies of "Cultural Marxism" in which Gramsci and the Frankfurt School have banded together to undermine western civilization, we are actually living through cultural capitalism, or more precisely capitalism as culture, in which wage labor, the accumulation of wealth by the wealthy, are not just economic relations but cultural norms. 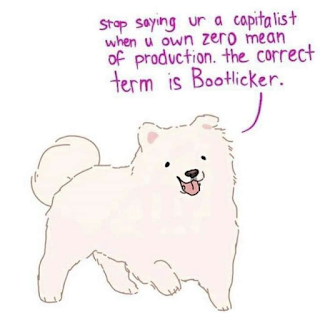 As much as I hate to disagree with the little dog from reddit, I think that she or he is actually wrong on this point (while still being a very good dog, I am sure). People are capitalists as a politics, as set of values, as almost a religion without actually owning capital. This is how the masses fight for servitude as if it was salvation, by believing that their servitude is their salvation, that work gives them meaning, capital gives them value, and just participating in the system makes them worthwhile.
Posted by unemployed negativity at 11:55 AM