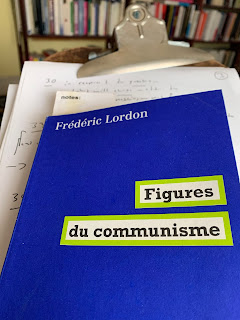 Frédéric Lordon has published four books since Capitalisme, désire, et Servitude in 2010, not counting collections of essays, edited volumes and even a play. I have reviewed them all here, and continued to use Lordon's writing in my research on the intersection of affect, imagination, and work in capitalism. I remain profoundly influenced by his interventions. However, I will be honest, prolific authors make me skeptical, even nervous. Sometimes publishing overtakes thinking and one ends up with a kind of diminishing returns as later books only put finishing touches on earlier innovations.
Figures du Communisme has an imposing and ambitious title, suggesting either a historical genealogy of the different figures communism or a refiguration of what it means to be communist. Such a book project is the kind of thing that would take time to develop. I am glad to see that it is neither of these things. Although it does touch on both, paying particular attention to the history of Allende's socialism in Chile and, as I will discuss, the general imperative and ideal of communism. What it is a publication of pieces of Lordon's blog over the last year, edited and expanded. It is less an attempt to offer a new theory of communism than to intervene politically, or at least polemically, in its struggle. In this way it is very similar to Vivre Sans, even closing with a debate with Félix Boggio Éwanjé-Épée on the relation of capitalism to racism, in that the emphasis is on the intervention in the conjuncture and not new theoretical perspectives. So to return to my anxiety above, while it takes time to develop a new philosophical perspective polemics are tied to a different temporality, one that always demands new interventions. This collection is less a collection of Lordon as a Marxist reader of Spinoza (which I ultimately think is distinct from Marxist-Spinozism) than as a committed communist intellectual and polemicist.
Anyone who has seen or read Lordon's debate with Piketty knows that he can be a scathing polemicist. I would say that he ranks with Badiou as a contemporary writer of polemics, and, also like Badiou, sometimes the polemic is at odds with the philosophical system, or, more to the point, sometimes the polemic does not seem to need the system.
First a word on communism, something that Badiou and Lordon also have in common. For Lordon there are three conditions. These are less invariants of a universal system than situations of the current conjuncture. The first is quite simple, and direct, a clear statement of where we are at the moment. As Lordon writes, "Between capitalism and humanity it is now a matter of it or us." This choice applies to the environment, the fundamental problem of infinite growth in a finite world, but also humanity. Capitalism destroys not just the planet but the entirety of the conditions of human life, social as well as ecological. Second, there is no way to address this choice within the institutions of democracy, institutions which must be understood to be institutions of bourgeois democracy, institutions that defend private property first and foremost. It is for this reason that communism, as an alternative to capitalism and as a politics outside of the state's managed democracy must become the figure, and the way to reconfigure politics.
One of the interesting things about Lordon's attempt to figure communism is that, at least in the interventions gathered here, it attempts to incorporate the pressing political issues that are often seen as outside the purview of communism as it has historically been figured. I am referring to the environment, structural racism, and patriarchy. I remember once reading a criticism, a polemic really, that criticized Lordon from being something of a throwback to post-68 radicalism in France due to his exclusive focus on capitalism as an object of criticism and his failure to incorporate the environment and racism or sexism into his analysis. I agree that Lordon's project sometimes reads like Deleuze and Guattari, albeit a stripped down and sober one, but it would appear that the second half of that criticism no longer applies. The essays in Figures du Communisme attempt to sketch out an ecological communism informed by a criticisms of racial capitalism, and social reproduction theory, most notably Silvia Federici.
With respect to the former, Lordon begins with seemingly obvious, but often overlooked assertion of "the incompatibility between a principle of infinite accumulation, which is the essence of capitalism, and the finite world." As Lordon argues this contradiction is so blatant, so obvious that it is at least at the outset hard to get past. How do people still believe in the viability of capitalism? Lordon argues that this belief is sustained by a secondary belief that becomes capital's ultimate alibi: the belief in the fundamental innovative nature of capital. Innovation as a belief papers over the gap between infinite growth and finite world, but such sophistry is paper thin. The connection between capital and innovation is more apparent than real, showing up in figures like Elon Musk who promise changes, while capital itself continues to double down on fossil fuels. This is not really a focus of Lordon's argument, but I find it interesting to think of the way that innovation functions as a kind of surrogate belief for capitalism. I think two conclusions, or two lines of inquiry follow from this: first, it is worth thinking about all of the concepts that are surrogates or stand-ins for capitalism, such as competition, flexibility, etc., second, and as a consequence of the first, point, it is worth examining the way these surrogates or conceptual stand-ins are accepted as part of even anti-capitalist criticisms. As Lordon wrote in an earlier book, we live in a capitalist culture not just a capitalist economy, and thus it would follow that opposition to capitalism must be opposition to its cultural dimension as well. 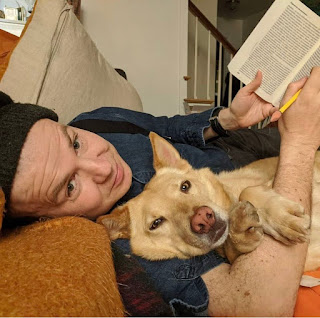 A Saturday night reading Lordon
As an alternative to capitalism communism must prioritize not only the production and reproduction of social life but ecological life as well. What about the other criticism restated above: how is a focus on communism, on the overcoming capital, going to address racism and patriarchy?
In order to answer this question, Lordon returns to what is at the center of his criticism of capitalism, the employment relation. As Lordon argues the employment relation subjects individuals to a double arbitrary nature. There is the arbitrary nature of the market, which is in turn reflected by the arbitrary nature of the employer. One is subject to both the general impersonal imperative to sell one's labor and the personal biases of the employer class. (I would add to this that the double arbitrary relation is not constant, as I have argued service labor has increased the power of the arbitrary nature of the employer. That is another matter, however.) Communism is a matter of overcoming both of these forms of power and dependence, the abstract power of the market and the immediate power of bosses.
The centrality of the wage relation is also how Lordon understands racism and patriarchy. All such ideologies rest on the same premise, "explicit or implicit that human beings are not actually equal in their humanity." These ideologies, hierarchies, and exclusions pre-exist capital, but are incorporated in the hierarchies of the wage relation, which even though it is autonomous from all other hierarchies and exclusions is not only perfectly compatible with other exclusions and hierarchies, using them as its alibi. What Lordon argues here is similar to what used to be called "dual systems theory," in which patriarchy and racism are independent systems that intersect with capitalism, even though he uses Althusser's theory of dominant and determination to argue how the capitalist mode of production determines and situates domination through the wage relation. This is similar to a thought that I have been working on, that racist hierarchies of humanity intersect with and reinforce the hierarchy of employment (and vice versa).
Two things follow from this understanding of the intersection of capital and racism: First the good, Lordon is very critical of the claim that just because anti-racist and anti-sexist politics can coexist with capitalism they should be dismissed. He cites several example of this from recent US history (once again it is worth noting the kind of asymmetry of political knowledge, French writers know more about American politics than the other way around), such as Hilary Clinton's question “If we broke up the big banks tomorrow, would that end racism? Would that end sexism?” That a certain cynical use of anti-racism and anti-sexism is compatible with capitalism does not mean that such struggles should be dismissed. Contrary to this Lordon lays out a categorical imperative for radical struggle as follows, "If therefore, to put it in big words, we had to formulate a political ethics of struggles, or of the coexistence of struggles, its first principle would be to do nothing in one's struggle that could harm other struggles." I like this maxim as a counterweight to all of the arguments that pronouns alienate the working class or whatever. Such claims are strategically dubious, counting on an idea of a supposed democratic consensus to come, and politically dubious, throwing marginalized people under the big bus of populist consensus. In contrast to this democratic imaginary of quantitative accumulation Lordon's idea of communism insists on the qualitative equality of struggles.
That is the good part. Now for the bad. Lordon's idea posits a capitalism that is by definition abstract and indifferent to hierarchies of race and gender. The sort that Marx argued for in the Communist Manifesto. As I mentioned above the book includes a response by Félix Boggio Éwanjé-Épée contesting the idea that there has ever been a capitalism indifferent to race and gender. The history of capitalism counters any idea that it has ever been, or could ever be indifferent to differences of race and gender. That Lordon includes Évanjé-Épée's response would seem to indicate that he concedes this point. There is a second point that is also mentioned in Évanjé-Épée's response which bears repeating. Lordon argues that unlike capitalism racism is systemic but not instituted. While it might make sense to make this claim on some level it goes against Lordon's own Spinozist assertion that politics is itself the organization and institutionalization of affects. It seems to me that a Spinozist, or Spinozist Marxist, account of politics must take seriously that institutionalization is not just to be found in such structures as the capitalist labor relation but includes the structures of feeling of racial and gender hierarchy and domination. There are not two systems for the organization of affect, but one, an overdetermined one in which race, class, and gender all intersect.
Posted by unemployed negativity at 1:43 PM